A groundbreaking committee that has been organized for the Tooele Valley Utah Temple is preparing for a ceremony at the end of August, but a referendum by Erda-area residents could delay the service or even alter plans for the temple according to Church officials interviewed by the Tooele Transcript Bulletin. If enough signatures are gathered to place the rezoning for the temple development on a ballot, the groundbreaking will be delayed for certain. The outcome of that potential vote could ultimately alter construction plans.

The concrete frame for the Praia Cabo Verde Temple has been poured and cured, and the crew is now setting concrete blocks to form the exterior walls of the building. While those supporting walls are constructed, metal posts are being used to hold the weight of the ceiling. A wing on the west side of the temple is visible in the accompanying photograph. 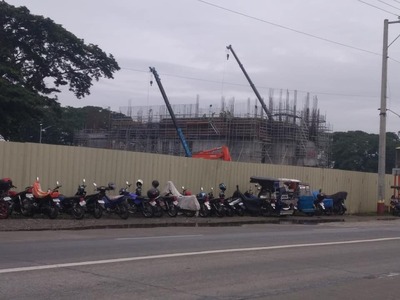 On June 16, 2020, quarantine restrictions for the province of Pangasinan—where the Urdaneta Philippines Temple is located—were eased from General Community Quarantine (GCQ) to Modified General Community Quarantine (MGCQ), allowing all public and private construction projects to proceed under proper social distancing and safety guidelines. Crews have been back at work continuing with the structural framing for the temple and adjacent housing facility. 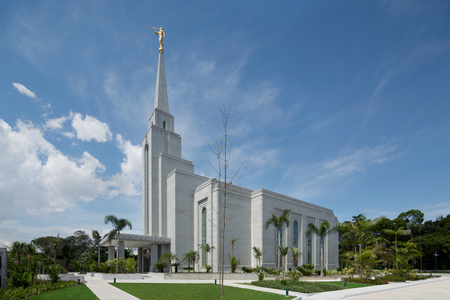 Several Temples to Reopen in Brazil Under Phase 1 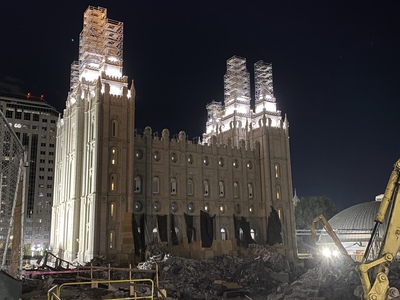 An evening view of the Salt Lake Temple shows the north wall of the historic building with the sealing room wing removed after more than five decades of use. That addition will eventually be rebuilt but only after a base isolation system is installed under the massive stone foundation of the temple to mitigate the effects of seismic activity. Over the past several months, landscaping has been removed and shoring activities have been underway to prepare for installation of the system. Demolition continues on the annex. 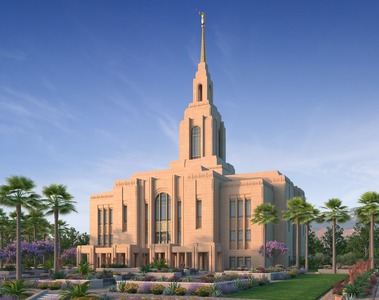 Red Cliffs Utah Temple will be the name of Washington County's second temple, which has previously been known by the project name Washington County Utah Temple. For the past several months, preliminary construction has been underway at the temple site, significantly raising the grade of the property. Members are looking forward to the announcement of the formal groundbreaking. 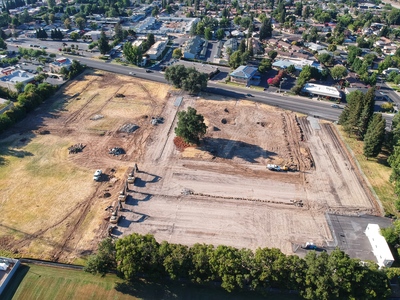 All of the former structures on the site of the Feather River California Temple have been demolished and removed, clearing the way for next weekend's groundbreaking ceremony scheduled for Saturday, July 18, 2020. Yuba City sits at the junction of several major highways, making temple worship more accessible for many members throughout Northern California. The temple will be the most northern in the state. 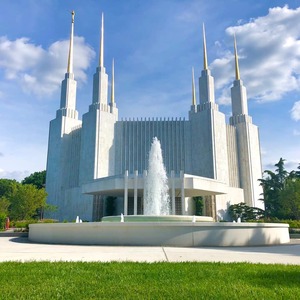 The water features at the Washington D.C. Temple are operating including a circular fountain with a large center spray and an infinity-style reflection pool near the visitors' center. Beautiful landscaping has filled the grounds, and renovation is nearing completion. An open house that was originally scheduled to begin in September has been postponed in response to COVID-19. The first open house of the temple, held in 1974, drew over 750,000 visitors. 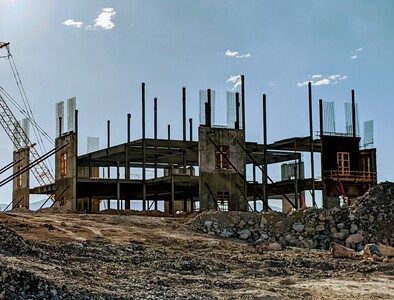 Structural steel framing for the Saratoga Springs Utah Temple has already reached the third level, and floor decks are going down for the main level and second level. The concrete walls on each side of the building are currently being braced by support beams until they are fully secured to the steel structure. The concrete slab for the meetinghouse has cured, and wood framing has begun. 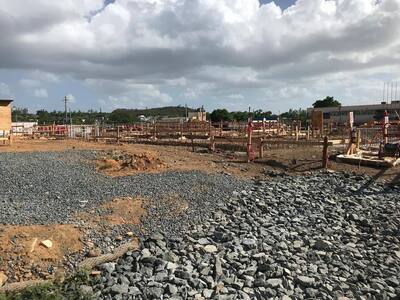 Construction has resumed on the San Juan Puerto Rico Temple with footings being poured and rebar being set for the foundation walls. The south-facing temple is being constructed on the east side of the property, and the meetinghouse is being built on the west side next to The School of San Juan. Shortly after excavation for the foundation was carried out, a lockdown order was issued on March 16, 2020, in response to the COVID-19 pandemic, creating a temporary delay. A four-phase reopening plan for the island began in May. 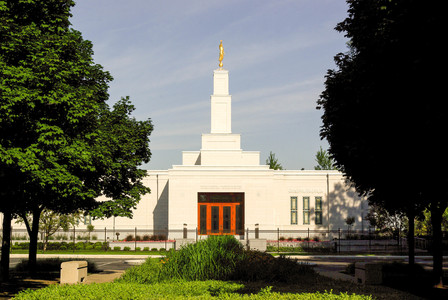 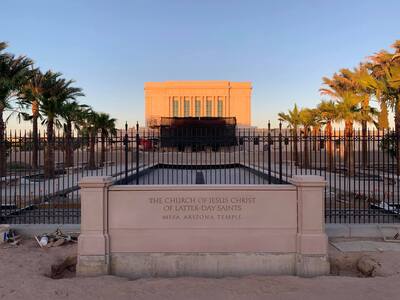 A handsome monument sign has been installed on the Mesa Arizona Temple grounds along Lesueur, directly across from the west reflection pool and main entrance to the building. The property continues to be filled with plants and shrubs while lamp posts are installed. Stone benches and decorative planters are among the stunning accents that have been set in place. The rebuilt entrance is being clad in terra cotta tiles. 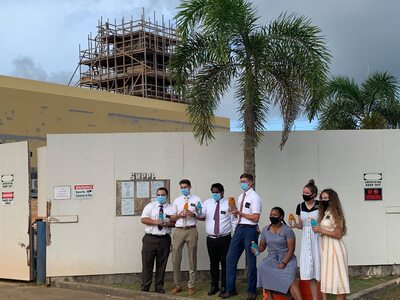 Missionaries in the Micronesia Guam Mission make regular visits to the Yigo Guam Temple site to offer refreshment to the hard-working construction crews including cold water and chilled bottles of Gatorade. Scaffolding has been removed from around the sealed and waterproofed exterior walls of the temple. Walls for the tower have been erected over the east end of the building. They will eventually be topped with a dome-like cupola. 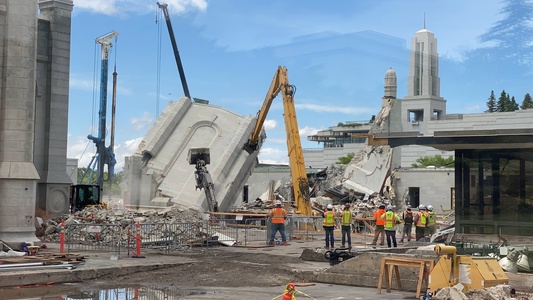 Watch a video showing the end wall of the Salt Lake Temple Annex coming down. The substructure of the facility has been dismantled and the majority of the superstructure has been demolished. Demolition also continues on the sealing wing annex, starting with removing the roof and disconnecting the interior from the historic side of the temple. Shoring work has been carried out along North Temple Street to prepare for the deep excavation coming to the north side of the temple where the former annex stood. 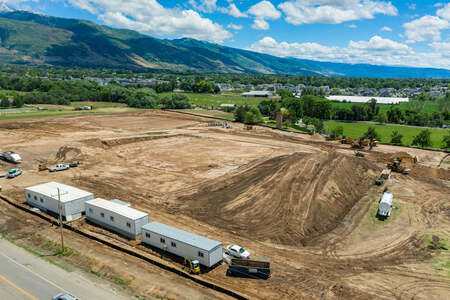 Mother duck and her ducklings have moved on from the Layton Utah Temple site, allowing the entire property to be cleared and rough graded. Construction trailers are lined up along East Oakhills Drive inside the chain-link fence that surrounds the perimeter of the nearly 12-acre parcel. The 87,000-square-foot temple has been designed with towers rising over each end of the building, similar to the nearby Brigham City Utah Temple. 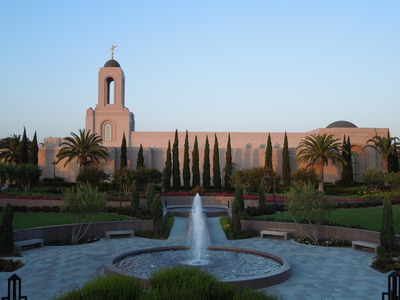 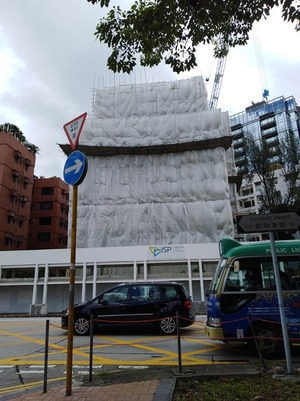 In less than two weeks, the Hong Kong China Temple will have been under renovation for a full year, having closed for the three-year project on July 8, 2019. For most of that time, the temple has been hidden from view, cloaked in white debris netting. But like a butterfly emerging from a cocoon, members are looking forward to seeing the transformed exterior of the temple once the netting is removed. 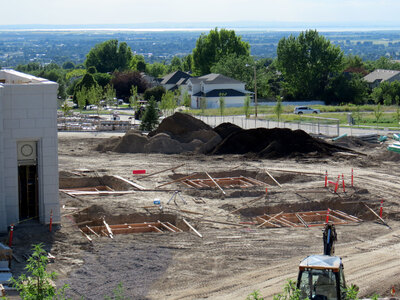 On the north side of the Pocatello Idaho Temple, forms are being set for a gathering plaza that will especially cater to bridal parties. Brides and grooms will exit from the rear side of the building and walk to the north where they can be received by family and friends and take pictures with the granite walls of the temple as backdrop. Exterior work is progressing with granite cladding climbing the second-level walls and sheathing being attached to the base of the tower. Interior work is also underway on the main level. 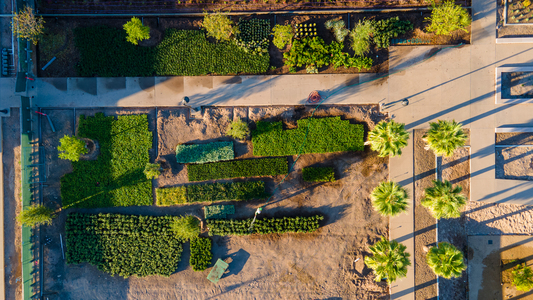 Swaths of green beautifully contrast against the desert soil surrounding the Mesa Arizona Temple where a multitude of plant-bearing pallets have been delivered to the north lawn for incorporation into the stunning landscaping. Concrete forms have been set for a new landscape structure near the north side of the temple. On the opposite side, improvements have been made to the grounds building including new siding and insulation. Roads continue to be paved and sidewalks poured. Watch the most recent video update for an exciting flight over the grounds. 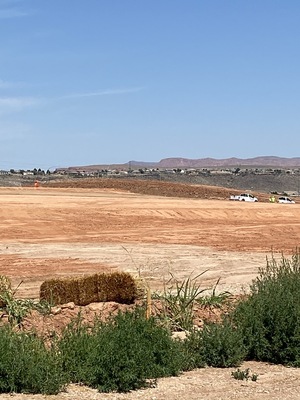 Preliminary construction activity has settled down at the site of Washington County's second temple where earth movers have worked for weeks to build up the grade of the property, creating a level mound for the temple and compacting the ground for future roadways. Members are looking forward to the announcement of a groundbreaking date. 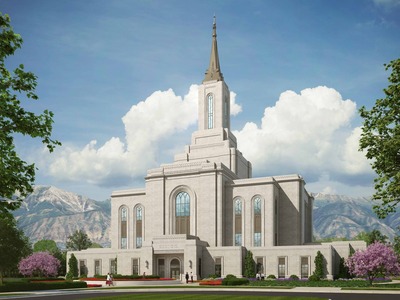 The First Presidency has announced that ground will be broken for the Orem Utah Temple on Saturday, September 5, 2020. The ceremony will be presided by Elder Craig C. Christensen, president of the Utah Area. Attendance at the temple site will be by invitation only. The three-story, 70,000-square-foot temple and an adjoining 20,000-square-foot meetinghouse will be constructed on a 16-acre parcel located at approximately 1471 South Geneva Road, just west of Interstate 15 and south of University Parkway. 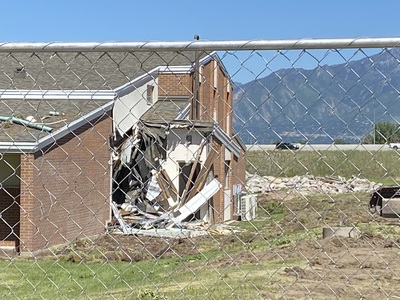 Demolition began today on the exterior structure of the former stake center where the Taylorsville Utah Temple will be constructed. With progress well underway on preparing the site for the temple, members are eagerly anticipating the release of the official rendering and groundbreaking date for the temple. It is expected to be similar in size and dimension to the Tooele Valley Utah Temple. 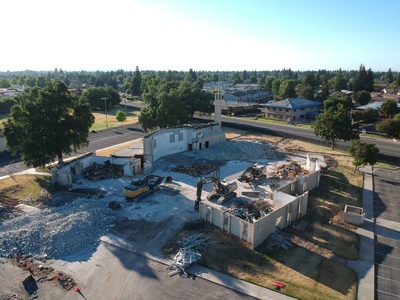 Local members are taking daily drone footage of the demolition progress on the Yuba City stake center where the Feather River California Temple will be constructed. Just a few walls remain of the church building as seen in the most recent photographs and videos. A formal groundbreaking ceremony for the temple will be held next month on Saturday, July 18, 2020. 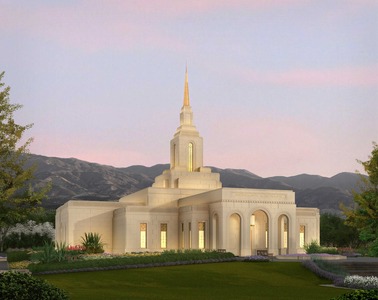 Rendering and Location Released for the Mendoza Argentina Temple

A single-spire, classically proportioned design has been revealed for the 21,000-square-foot Mendoza Argentina Temple. Plans also call for a meetinghouse and patron housing facility to be constructed on site. Detailed plans are still being developed while project leaders work with government officials on the permitting process. The buildings will be constructed in the Champagnat neighborhood on the western edge of the beautiful suburb of Las Heras, a community that borders Mendoza to the north. No groundbreaking date has been announced yet. 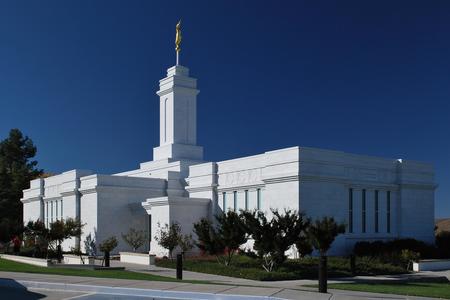 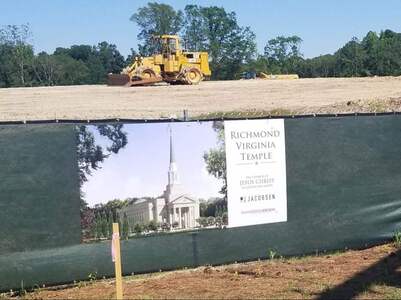 Building permits for the Richmond Virginia Temple have been issued by Henrico County, just a couple of weeks following the issuance of building permits for the meetinghouse that will share the site. A beautiful sign identifying the project has been added to the construction fence surrounding the property. Heavy equipment has cleared the ground, and construction of the buildings is just in the beginning stages. 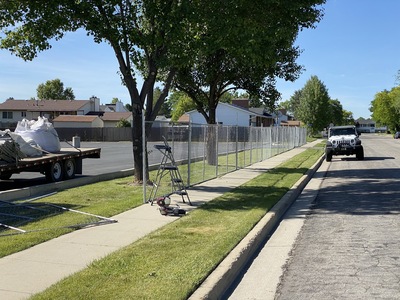 A chain-link fence is going up around the property for the Taylorsville Utah Temple, as the time draws near for demolition of the former stake center. Over the last few weeks, the lamp posts in the parking lot have been dismantled, natural gas to the property has been turned off, the stone welcome sign has been removed, and abatement of hazardous materials has been carried out. 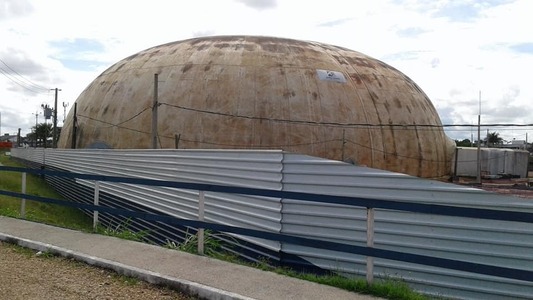 Construction progress on the Belém Brazil Temple is still fully obscured from view. A weather-protecting dome was placed over the site more than six months ago, providing dry working conditions for the crew from the heavy and frequent rainfalls. Local members look forward to catching a glimpse of their new temple once the dome is removed and the buildings are revealed. Belém is located on the north coast of Brazil, nearly a thousand miles from the closest temple. 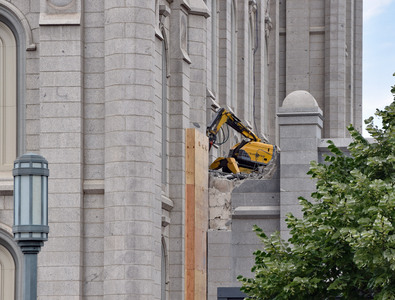 As demolition continues on the Salt Lake Temple annex, crews have now begun to raze the sealing room addition on the north wall of the temple. The current annex and the sealing room wing were both constructed in the 1960s. The annex will be replaced with two patron pavilions and an underground recommend desk area with a large skylight. The sealing room extension will be rebuilt slightly wider than before and more true to the original exterior of the temple. Renovation has been underway for almost six months. 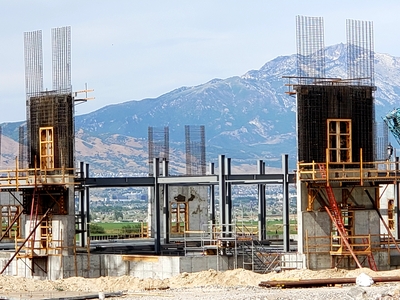 Steel beams have joined the reinforced concrete walls forming the structural support for the Saratoga Springs Utah Temple. Girders are rising vertically from the basement floor and lying horizontally across the foundation walls to create the steel skeleton of the building. Rebar has been set to extend the concrete wall panels to the third level.

Construction continues under the cover of a dome