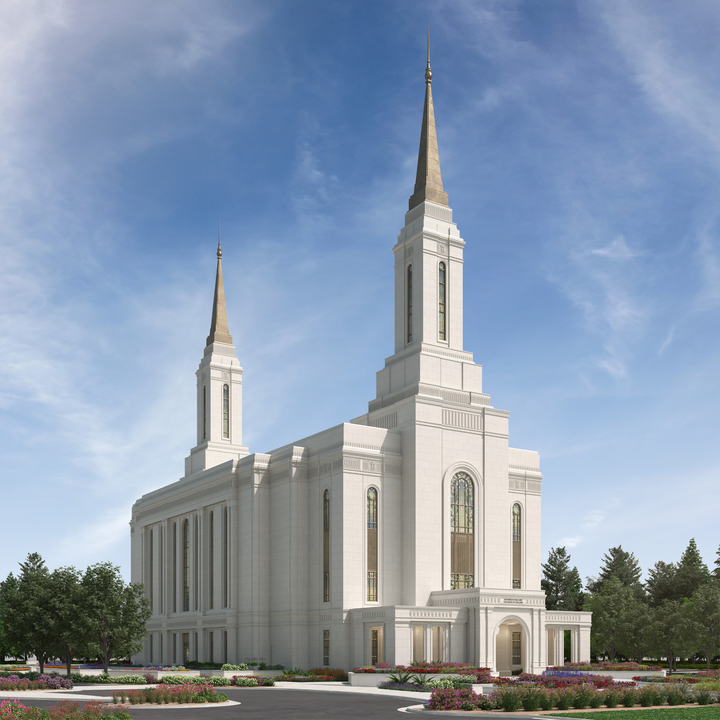 Groundbreaking for the Lindon Utah Temple was carried out on a chilly spring morning on Saturday, April 23, 2022. The meeting portion of the event was held in a nearby meetinghouse where Elder Kevin W. Pearson, president of the Utah Area, presided and conducted. In his dedicatory prayer, Elder Pearson said: "May the construction of Thy holy house here in Lindon continue to bless this community with peace, love and unity." Shovelfuls of dirt were turned under a tent on the temple site at 800 East and Center Street in Lindon.

The Lindon Utah Temple will be a three-story building of approximately 81,000 square feet with double spires of equal height.1 The main entrance to the granite-clad building will be on the north end with a baptistry entrance on the south. The ordinance spaces include four instruction rooms with 50 seats each, four sealing rooms, and two baptistries. The temple will feature art and ornamentation that celebrates the area's agrarian roots including the linden tree flower. The landscaping will include a gathering area in the northeast corner of the property where bridal parties can take photographs with a backdrop of the temple or of beautiful Mt. Timpanogos. Parking will surround the temple in a circular fashion with a black ornamental fence surrounding the entire site. A 1,500-square-foot maintenance building will also be constructed.

On April 26, 2021, an official exterior rendering was released for the Lindon Utah Temple.

On December 21, 2020, the location of the Lindon Utah Temple was announced. The temple will be constructed near the intersection of 800 East and Center Street in Lindon, Utah.

On October 4, 2020, President Russell M. Nelson announced plans for the construction of the Lindon Utah Temple—the twenty-fifth temple in the state and the seventh in Utah County. Lindon is a small city of approximately 11,000 people located immediately north of Orem and south of Pleasant Grove in Utah Valley. Church members in Lindon currently belong the Mount Timpanogos Utah Temple district, which encompasses 63 stakes. At the time of the announcement, there were four dedicated temples in Utah County and two under construction.2

"I urge all who have not yet received these greatest of all blessings within the walls of the temple to do whatever may be necessary to qualify to receive them."
—James E. Faust