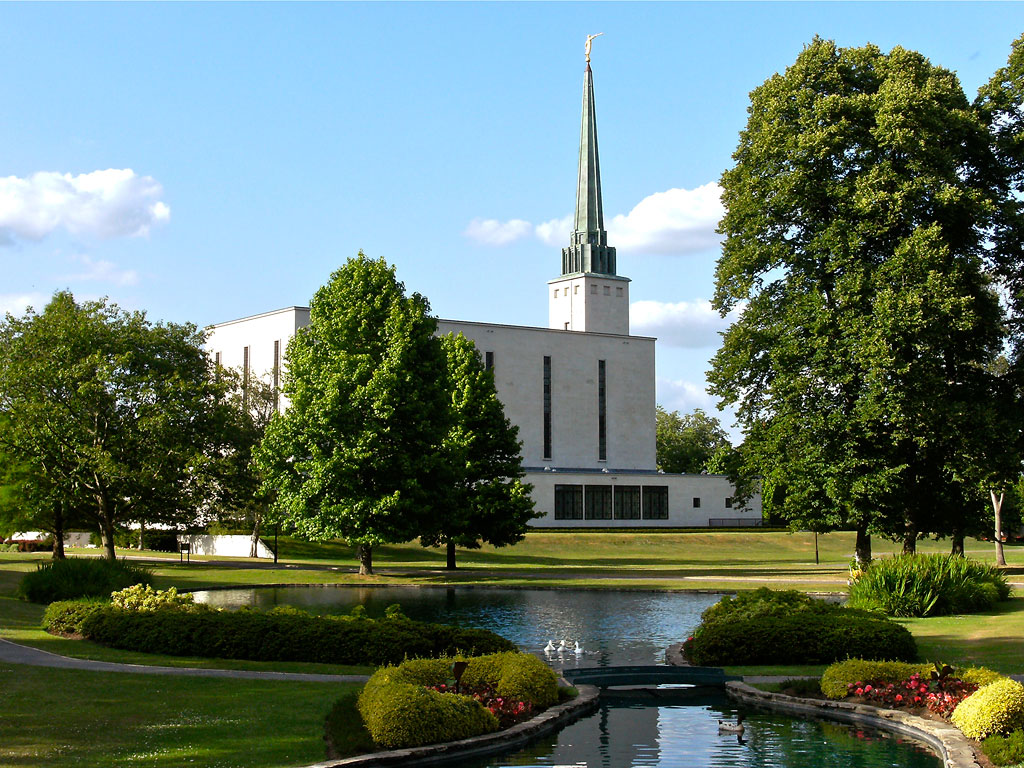 Occupying an exceptionally handsome estate in the southern English countryside, the London England Temple is located about 25 miles south of London, just a few miles east of the London Gatwick Airport. Several buildings share the site—most notably a three-story, 40-room Elizabethan-style mansion—known as the Manor House, which has served various purposes for the Church over the years including patron housing and missionary training center. Surrounding the temple are 10 acres of paradise-like formal grounds featuring Eden Brook on the southern border of the property and numerous stately oak trees including the plaque-bearing "David O. McKay Oak." A picturesque pond sits to the southwest creating inspiring reflections of the temple both day and night.

The London England Temple was the second temple built in Europe, following the Bern Switzerland Temple (1955) and the first built in the United Kingdom.

The London England Temple was originally named the London Temple.

The London England Temple was originally constructed with a single 250-seat, auditorium-style ordinance room equipped with motion-picture presentation of the endowment.

The Magna Carta was signed in 1215 in the same county of Surrey where the London England Temple is located.

The site where the London England Temple stands, known as Newchapel Farm, was listed in the Domesday Book of William the Conquerer.

The original design of the London England Temple called for a spire of perforated aluminum, similar in appearance to the spires of the Oakland California Temple. The perforations were later removed from the design, however, in favor of a solid sheath of lead-coated copper.

President David O. McKay, who took personal interest in every phase of development of the London England Temple, chose the exact location on the 32-acre site where it stands today. He was particularly impressed with an ancient oak tree on site (at least 450 years old) and instructed that it be preserved. Workmen called the tree the "David O. McKay Oak" and attached a plaque in his honor. In his modesty, President McKay asked that his name be removed, but the name of tree persists out of esteem for this prophet of the Lord.

The overwhelming response to the London England Temple open house—marked by moments of over a thousand people waiting in line to get inside—prompted leaders to extend the open house another three days for a total of 76,324 visitors.

The London England Temple was dedicated about five months after the Hamilton New Zealand Temple, marking the first time that two dedications were held in the same year.

The London England Temple was dedicated in six sessions, Sunday through Tuesday. In attendance were more general authorities of the Church than had been in England since 1840 when eight members of the Twelve Apostles came as missionaries. President McKay observed his 85th birthday on this occasion on September 8, 1958.

In 1990, the London England Temple closed for major remodeling and refurbishment, which included the addition of a fourth floor, upgrading of mechanical systems, replacement of worn furnishings, repainting of all interiors, cleaning of exterior, and more. The temple reopened over two years later in October 1992, after a successful open house of over 55,200 visitors.

On Monday, December 15, 2008, an 8-foot statue of the angel Moroni was added by helicopter to the 160-foot high spire of the London England Temple for the first time. It was the culmination of the temple's 50-year anniversary, which included the completion of two years of renovation work on the buildings that surround the temple including the visitors' center, Manor House, and patron housing facility. New mission offices were also added.

On December 31, 2017, the London Temple Visitors' Centre was decommissioned as a visitors' center and repurposed for guests as a non-patron waiting area. The Church continues to operate a visitors' center at the Hyde Park Chapel in the heart of London.