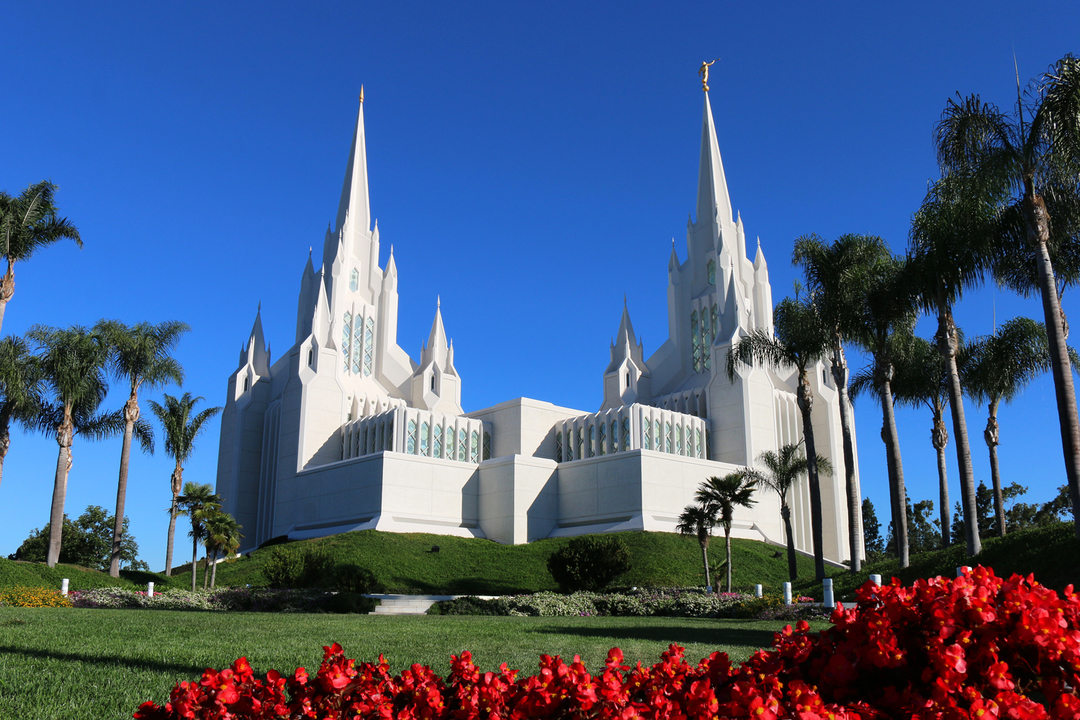 Situated near the upscale community of La Jolla in San Diego, the striking double towers of the San Diego California Temple soar above I-5 in heavily populated Southern California. Connecting the towers at the center is a supernal star-shaped atrium filled with a healthy, colorful garden. The atrium is accessed from the breathtaking two-story Celestial Room filled with towering art glass, suspended light fixtures, and featuring a grand staircase to an upper-level balcony. The public is invited to tour the manicured temple grounds and a visitors' center honoring the San Diego Mormon Battalion, located 10 miles south of the temple in Old Town San Diego.

The architects for the San Diego California Temple were William S. Lewis, Jr., design architect; Dennis Hyndman, project architect; and Shelly Hyndman, interior design architect. The Hyndmans, who are Roman Catholic, had not toured the interior of a temple of The Church of Jesus Christ of Latter-day Saints until the Las Vegas Nevada Temple open house commenced in 1989.

On Monday, December 23, 1991, the 186th anniversary of the birth of the Prophet Joseph Smith, a gilded statue of the angel Moroni was installed atop the eastern spire of the San Diego California Temple. Shortly after the setting, a traveling flock of seagulls—a bird of symbolic significance to the Church—circled the new statue about three times before continuing on its course.

President Benson's ailing health did not allow him to preside at the dedication of the San Diego California Temple. President Gordon B. Hinckley was assigned to dedicate the temple in 23 sessions where 49,273 persons attended.

The San Diego California Temple was honored as Headliner of the Year for 1993 in the landmark category by the San Diego Press Club.

For its efforts during the open house of the San Diego California Temple to increase public awareness of the Church and the role of the temple, the Church was presented with the Public Relations Society of America's prestigious Silver Anvil Award in the category of special events and observances by non-profit organizations.

"Temple. One other word is equal in importance to a Latter-day Saint. Home. Put the words holy temple and home together, and you have described the house of the Lord!"
—Boyd K. Packer