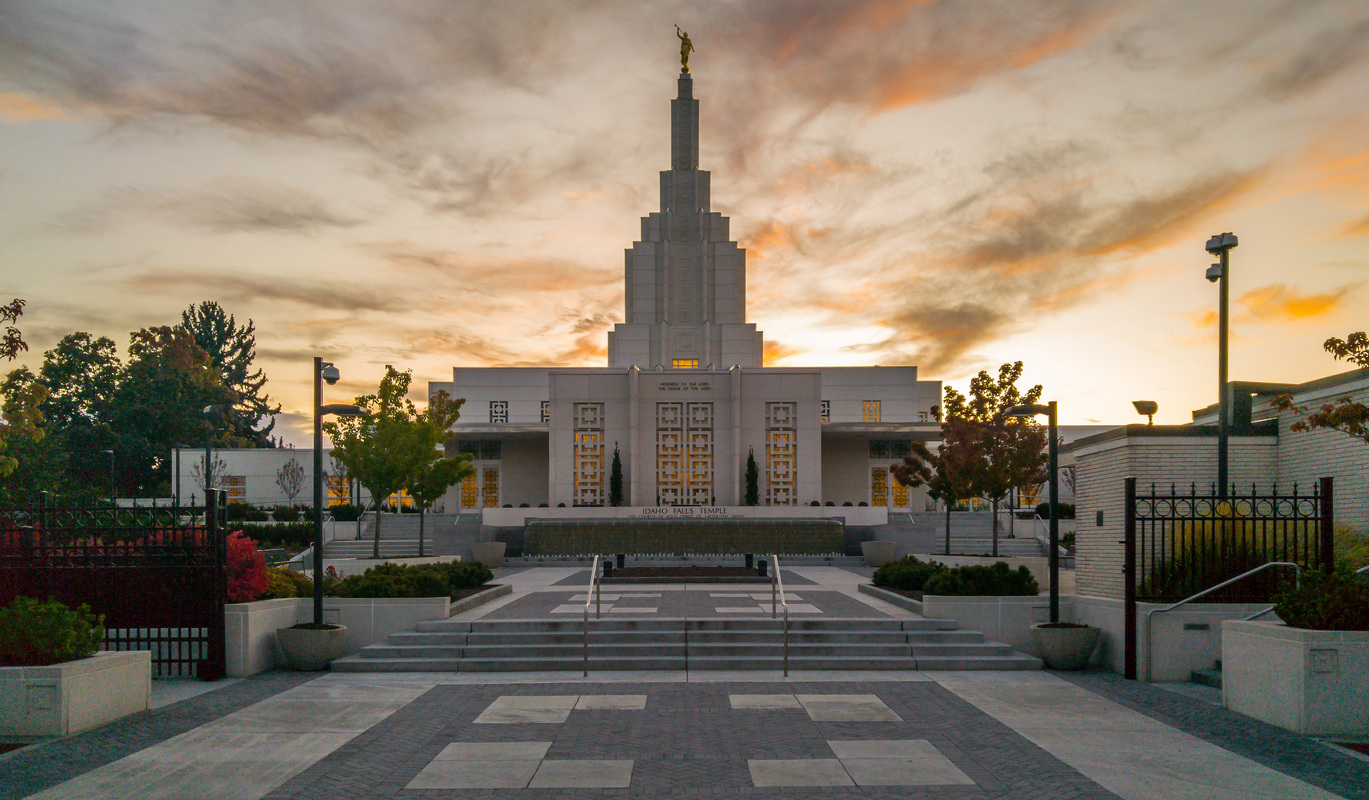 Standing on the banks of the Snake River, just above the cascading waters for which the city is named, the gleaming white Idaho Falls Idaho Temple serves as a centerpiece to the city. Just east of the temple is a gorgeous waterfall feature and public visitors' center featuring films, displays, multimedia presentations, and an awe-inspiring reproduction of Thorvaldsen's Christus statue. A stake center and parking lot occupy the property just south of the temple on the former site of an LDS Hospital.

The Idaho Falls Idaho Temple was the first temple built in Idaho.

The Idaho Falls Idaho Temple was the only temple dedicated by President George Albert Smith.

The Idaho Falls Idaho Temple was the first temple designed with a central spire. (The design represented a return to the use of spires, as the three previously dedicated temples featured no towers or spires.)

The east side of the Idaho Falls Idaho Temple originally featured a series of three reflecting ponds that were filled with water lillies and small fish. In the 1960s, the ponds were converted to flowerbeds. In 2011, the concrete ponds were removed as part of a landscaping renovation and replaced with a waterfall feature.

The design of the Idaho Falls Idaho Temple was inspired by a vision of an ancient Nephite temple beheld by architect John Fetzer, Sr., who had prayed for guidance.

While excavating through sand for the foundation of the Idaho Falls Idaho Temple, workers encountered solid lava rock beneath—an ideal foundation for the basement walls.

At the cornerstone ceremony for the Idaho Falls Idaho Temple held on October 19, 1940, six-year-old John Groberg was given the assignment to hold President David O. McKay's hat. John would later become a general authority and the temple's 14th president.

Once the exterior of the temple was completed in September 1941, the interior was expected to be completed by the end of the next year. However, World War II shortages delayed completion of the temple four more years.

The Idaho Falls Idaho Temple is one of only seven temples where patrons progress through four ordinance rooms before passing into the Celestial Room. (The other six temples are the Manti Utah Temple, the Salt Lake Temple, the Laie Hawaii Temple, the Cardston Alberta Temple, the Los Angeles California Temple, and the Nauvoo Illinois Temple.)

In September 1983, a helicopter was employed to install an angel Moroni statue atop the spire of the previously statueless Idaho Falls Idaho Temple.

The angel Moroni statue atop the Idaho Falls Idaho Temple is a casting made by LaVar Wallgren of the statue created by Torlief Knaphus for the Washington D.C. Ward chapel, which he made as a replica of Cyrus E. Dallin's statue atop the Salt Lake Temple. (Other castings of this statue stand atop the Boston Massachusetts Temple and formerly atop the Atlanta Georgia Temple.)

In October 2011, a complete renovation of the landscaping of the Idaho Falls Idaho Temple was completed, which included replacement of the flowerbeds on the east side of the temple with a beautiful waterfall feature, installation of four gathering plazas—one in each quadrant of the grounds, reconfiguration of the walkway to the baptistry, and creation of a bridal courtyard on the south side of the temple. The Idaho Falls Beautification Commission awarded the project its top award for 2012 in the non-residential category.

The Idaho Falls Idaho Temple was rededicated on June 4, 2017, following a two-year renovation that brought the historic temple up to code and refreshed the interior. Structural walls were reinforced, and all mechanical and electrical systems were upgraded. A separate exit was created for brides and grooms, and a large waiting room was added for wedding parties—reducing the size of the former office space. In the ordinance rooms, the original murals were restored, and the number of seats was reduced from 140 to 88 to increase roominess and improve the room-to-room progression of the temple. Finishes and furnishings were replaced throughout the temple in shades of chartreuse, purple, and gold.1

"I have the conviction that the Lord will bless us as we attend to the sacred ordinance work of the temples. Blessings there will not be limited to our temple service. We will be blessed in all of our affairs. We will be eligible to have the Lord take an interest in our affairs both spiritual and temporal."
—Boyd K. Packer

4th dedicated temple in operation; closed for renovation; boreholes being drilled along south side of foundation; majority of demolition debris removed