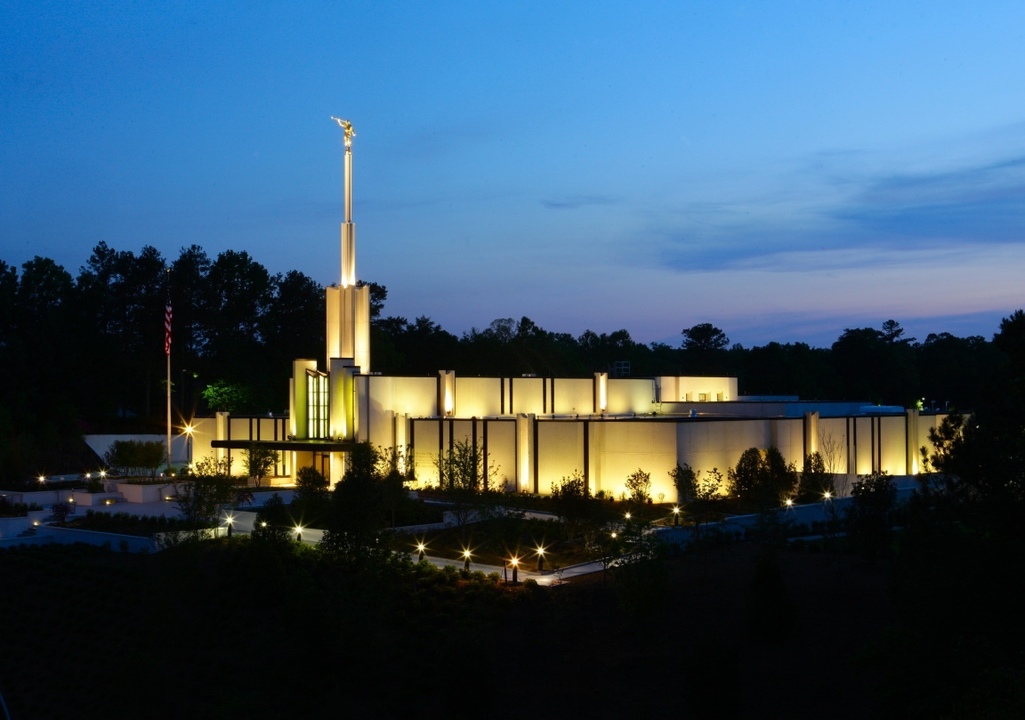 Located on the north side of the Atlanta metro area, the Atlanta Georgia Temple stands just west of the Turner McDonald Parkway on a gentle hillside in the community of Sandy Springs. Highlighting the holy structure is a wall of heavenly stained glass that softly glows at night beneath the temple's single spire. The rolling lawn and meticulous grounds offer a spiritual refuge to all who visit.

The Atlanta Georgia Temple was the first temple built in the Southeastern United States (and in Georgia).

The Atlanta Georgia Temple was the first temple dedicated by President Gordon B. Hinckley, who went on to dedicate or rededicate 89 other temples.

The Atlanta Georgia Temple was originally named the Atlanta Temple.

On March 7, 1981, nearly 10,000 members crowded on the site of the Atlanta Georgia Temple to witness the first ceremonial shovelfuls of dirt at the groundbreaking ceremony.

The originally proposed design for the Atlanta Georgia Temple fell short in the eyes of a Faith & Values reviewer for the Atlanta Journal-Constitution, who noted the absence of a spire and gold angel. A short time later, however, on January 10, 1982, Church architect Emil B. Fetzer announced revised plans for the temple, which commenced a tradition of incorporating a spire and angel Moroni into the design of nearly every successive temple of the Church until the 2020s.

In May 1983, over 60,000 people toured the Atlanta Georgia Temple during its nearly three-week public open house. The first day of the open house was reserved for VIP guests including various local leaders and baseball legend Dale Murphy of the Atlanta Braves—himself a member of the Church.

The angel Moroni statue that originally stood atop the Atlanta Georgia Temple, which has now been replaced, was a casting made by LaVar Wallgren of the statue created by Torlief Knaphus for the Washington D.C. Ward chapel, which he made as a replica of Cyrus E. Dallin's statue atop the Salt Lake Temple. (Other castings of this statue stand atop the Idaho Falls Idaho Temple and the Boston Massachusetts Temple.)

The Atlanta Georgia Temple closed for nearly two years beginning July 1, 2009, for a complete remodel of the interior, renovation of the exterior, and relandscaping of the grounds. The interior was reconfigured to feature high ceilings in the foyer, a nonpatron waiting room, a high-capacity sealing room, progressive ordinance rooms with murals, and art glass illuminated with daylight-style lighting in the Celestial Room. Clothing rental was removed, and food vending was relocated.

Word of The Church of Jesus Christ of Latter-day Saints first appeared in Georgia newspapers as early as 1831.1 John Eldridge, the first recorded missionary of the Church to reach Georgia, wrote of his 1843 experiences that he preached "to the utter astonishment of the people and many rejoiced."2 In the 1840s and 1850s, dozens of Georgians accepted the message of the restored gospel and left their homes to gather with the Saints, first in Nauvoo, Illinois, and later in the trek west to the Utah Territory.3

During the Civil War, proselyting ceased throughout the South and did not resume in Georgia until the mid-1870s.4 Missionary John Morgan and his successors preached successfully in the North Georgia Mountains with a steady flow of converts emigrating to Utah and the surrounding area over the next fifteen years.5 The tide of converts moving to pioneer settlements in the west began to slow in the early 1900s and ended shortly after 1914 when Church President Joseph F. Smith toured the South and asked Latter-day Saints to say in their homes and build up the church locally.6 This change enable the Church to grow more consistently in Georgia and created additional opportunities for local leadership.

During this period, proselyting activities shifted from rural areas to cities with missionaries arriving in Atlanta in 1898 and renting a building on Broad Street near present day Martin Luther King Jr. Drive.7 A permanent congregation was organized in Atlanta in 19068 with a meetinghouse dedicated the following year at Woodward Avenue and Connally Street.9 By 1920, congregations had been established in Augusta,10 Axson,11 Buchanan,12 Columbus,13 Empire,14 Macon,15 Savannah,16 and Whitewater (Peachtree City).17 In 1915, the Atlanta Branch moved to a new location near the State Capitol,18 and again in 1925 to the corner of North Avenue and Boulevard.19 In 1930, church membership statewide was 4,311,20 with 400 members in Fulton County.21 Due to continued growth, in 1952 the Church purchased a lot at 1450 Ponce De Leon Avenue and began construction on what would become the oldest existing Church meetinghouse in Atlanta.22 The first Stake in Georgia, the Atlanta Stake was organized on May 5, 1957, including congregations in Athens, Gibson, Milledgeville, and Palmetto.23

The Church Services Center in Tucker serves as a hub for humanitarian efforts providing resources throughout the region. Atlanta Latter-day Saints gave disaster relief to the community after the 1992 Hurricane Andrew in Albany and the flooding in 1994, when some 6,000 Church volunteers assisted homeowners. In the wake Hurricane Katrina in 2005, hundreds were organized and traveled from Georgia to Mississippi and Louisiana to assist in the cleanup and rebuilding over a period of several months.