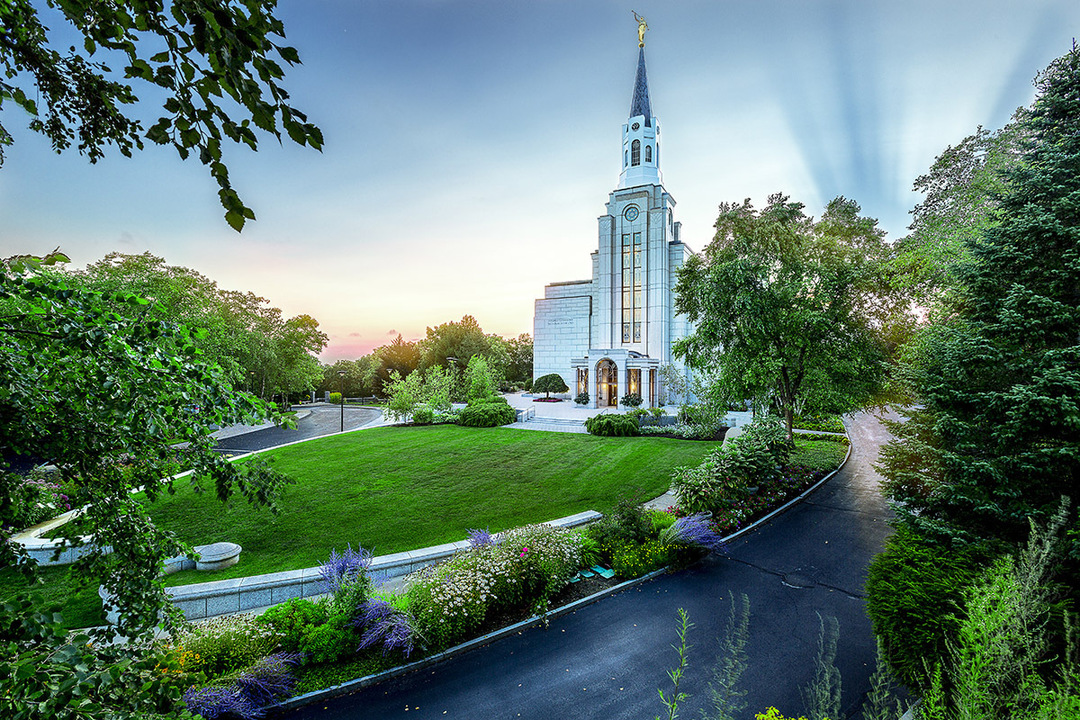 Standing atop a wooded granite hillside in the northwest suburb of Belmont, the Boston Massachusetts Temple is a striking landmark along the busy Concord Turnpike. The public is welcome to tour the grounds of the temple and adjoining meetinghouse, which feature a series of walkways that wind among the beautiful trees and meticulously landscaped grounds.

The Boston Massachusetts Temple holds the distinction of being the 100th operating temple of the Church—fulfilling President Gordon B. Hinckley's desire to have 100 temples in operation before the end of the year 2000.

The Boston Massachusetts Temple site was originally purchased for the meetinghouse that adjoins the temple. And although the architect was asked to design the meetinghouse for the center of the property, he could only devise a design that placed the building in the lower corner. Despite the urging of Church leaders, he insisted that another architect would have to be hired if they wanted the building elsewhere. The design was accepted. That decision left a large empty parcel at the top of the granite crag, perfect for the later-announced temple.

The original design for the Boston Massachusetts Temple was a 94,000-square-foot structure with six bulky spires of varying heights—the highest reaching 156 feet. A priesthood assembly room would occupy the majority of the top floor with the Celestial Room opening up to a top floor balcony. In a gesture of kindness toward opposing neighbors, however, the Church eliminated the top floor, all but one spire, and reduced the overall size of the building to minimize its impact on the neighborhood.

Not long after construction of the Boston Massachusetts Temple began, a few neighbors became alarmed by its size and filed suit with the intention to have the temple torn down. The plaintiffs argued that the state's Dover Amendment, which exempts religious buildings from local zoning, violated the separation of Church and State. The federal judge disagreed and ruled in favor of the Church.

The Boston Massachusetts Temple was dedicated without a steeple due to a second law suit contesting the proposed height of the steeple. The Church eventually won the case on appeal, and the 139-foot steeple was added about a year after the dedication.

Elder Loren C. Dunn, the first president of the Boston Massachusetts Temple, passed away just hours after the court's ruling that the steeple could be added.

The angel Moroni statue was installed atop the Boston Massachusetts Temple on September 21, 2001, in a tri-temple setting honoring the 178th anniversary of the first appearance of Moroni to the Prophet Joseph Smith. (The other two temples participating in the setting were the Nauvoo Illinois Temple and the The Hague Netherlands Temple.)

The angel Moroni statue atop the Boston Massachusetts Temple is a casting made by LaVar Wallgren of the statue created by Torlief Knaphus for the Washington D.C. Ward chapel, which he made as a replica of Cyrus E. Dallin's statue atop the Salt Lake Temple. (Other castings of this statue stand atop the Idaho Falls Idaho Temple and formerly atop the Atlanta Georgia Temple.)

"Let us truly be a temple-attending and a temple-loving people….Let us make the temple, with temple worship and temple covenants and temple marriage, our ultimate earthly goal and the supreme mortal experience."
—Howard W. Hunter