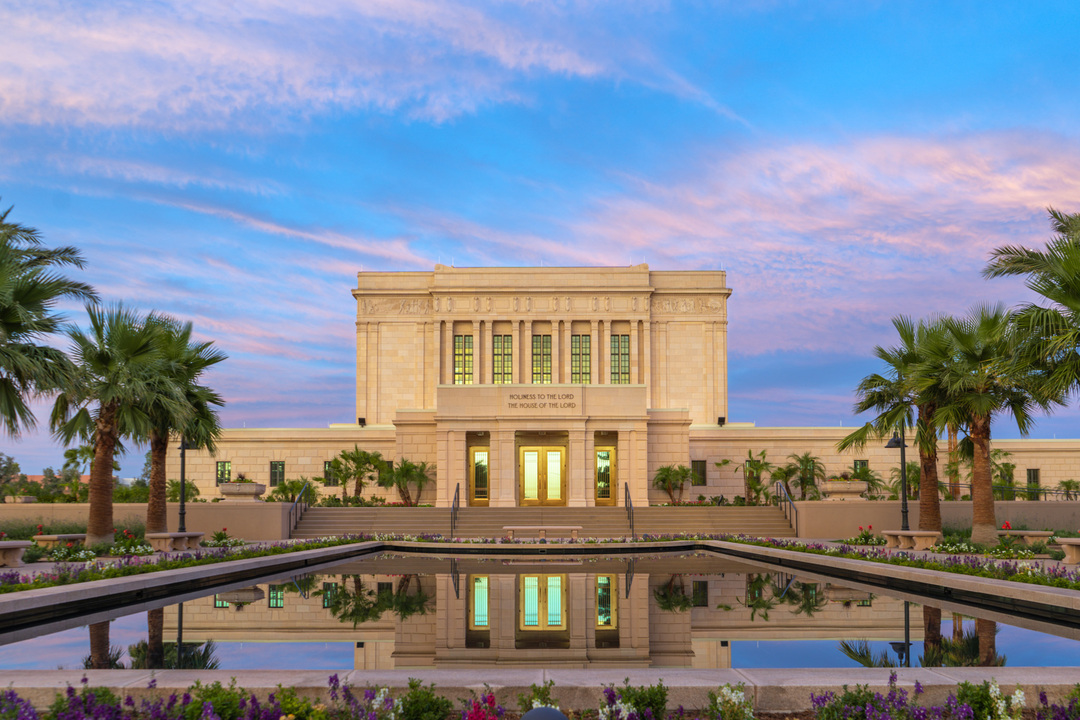 Tours offered during the last two years of construction

Located just east of the original Mesa Townsite—settled by pioneers of The Church of Jesus Christ of Latter-day Saints—the Mesa Arizona Temple anchors a historic district, which has predominantly retained its residential character. A public visitors' center shares the meticulously manicured grounds of the temple, which feature a cactus garden and large reflection pools. The Easter season brings thousands of guests to the temple grounds every year to watch Jesus the Christ, the largest annual outdoor Easter pageant in the world. At Christmas time, the grounds are converted to an exquisite Nativity display accented by hundreds of thousands of Christmas lights.

The Mesa Arizona Temple was the first temple built in Arizona.

The Mesa Arizona Temple was the first temple to present the endowment in a language other than English. (The first non-English session was presented in Spanish in 1945.)

The Mesa Arizona Temple was the first temple to reopen to the public for an open house prior to a rededication.

The presentation of the endowment was originally delivered by live acting in the Mesa Arizona Temple.

Before the Mesa Arizona Temple was constructed, Arizona members performed temple ordinances in the St. George Utah Temple. Because of the numerous bridal parties that traveled the wagon road between St. George and Arizona, the well-trod path became known as the Honeymoon Trail.

The architects chosen for the Mesa Arizona Temple had recently designed the Utah Capitol Building.

Carved friezes decorate each corner of the top of the temple, depicting the fulfillment of Isaiah's prophecy that the Lord would gather His people in the last days from the four corners of the earth.

Instead of a formal open house, tours were offered during the last two years of construction of the Mesa Arizona Temple to any interested visitors.

For many years, the Mesa Arizona Temple was known as the "Lamanite Temple," as it was the destination of annual temple excursions for Hispanic and Native American members of the Church, especially the Mexican Saints.

The Mesa Arizona Temple features beautiful hand-painted murals on the walls of its progressive-capable ordinance rooms: Creation Room, Garden Room, World Room, and Terrestrial Room (no murals). They are designed around a grand staircase leading to the Celestial Room, which occupies the highest level of the temple.

The Mesa Arizona Temple is one of only six temples where patrons progress through four ordinance rooms before passing into the Celestial Room. (The other five temples are the Laie Hawaii Temple, the Cardston Alberta Temple, the Idaho Falls Idaho Temple, the Los Angeles California Temple, and the Nauvoo Illinois Temple.)

The Mesa Arizona Temple was closed in February 1974, for extensive remodeling that equipped the Creation, Garden, and World Rooms for single-room film presentation of the endowment; the Terrestrial Room became a veil room. The decaying burlap murals were removed from the rooms, and the salvageable pieces were shipped to Church headquarters for preservation and storage. A new entrance and an additional 17,000 square feet were added, providing larger dressing rooms and increasing the number of sealing rooms.

In 1980, a fourth ordinance room was added by converting a space previously used by the female patrons. This allowed endowment sessions to begin every half hour.

In 1991, the preserved sections of the original murals were sent back to the Mesa Arizona Temple for reinstallation and restoration. Only one wall in each room could be restored. The new ordinance room added in 1980, which did not have a mural before, was decorated with sections from the original World Room mural.

On May 19, 2018, the Mesa Arizona Temple closed for a three-and-a-half-year renovation that included new roofing and drainage systems; upgrades to the mechanical, electrical, plumbing, and HVAC systems; interior improvements consistent with the historical character of the building; replacement of the furniture and finishes; preservation and augmentation of the historic murals; replacement of the windows consistent with the originals; an overhaul of the grounds that preserved shade trees, replaced reflection pools, introduced new garden spaces, and better accommodated the annual Easter Pageant; demolition of the on-site visitors' center and construction of a new visitors' center and Family Discovery Center street.

"We have thought of thy lovingkindness, O God, in the midst of thy temple."
—Psalms 48:9