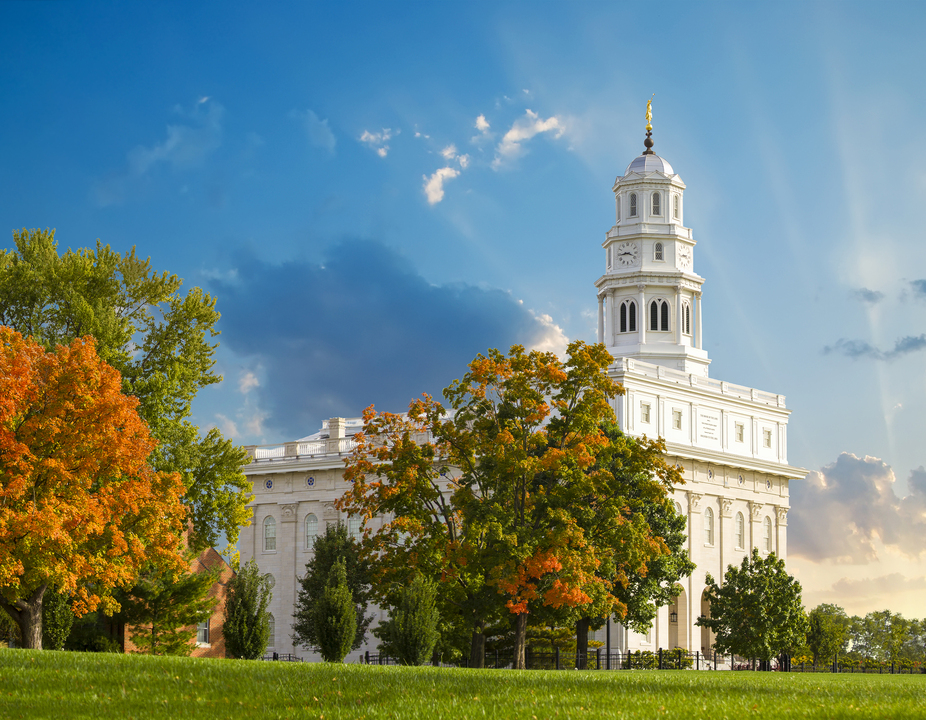 The Nauvoo Illinois Temple stands on a high bluff overlooking a bend in the Mississippi River. The majestic building is a faithful reproduction of the original Nauvoo Temple built by settlers of the Church in the 1840s and destroyed by arson fire in 1848 and tornado-force winds in 1850. Featured on the grounds west of the temple is a handsome statue depicting Church founder Joseph Smith and brother Hyrum Smith on horseback; both were martyred in Carthage Jail during construction of the original temple. Nauvoo is rich in Church history and the destination of thousands of tourists each year. The temple operates an accelerated summer schedule to accommodate demand. Summer is also the season of the popular Nauvoo Pageant: A Tribute to Joseph Smith.

The Temple Arrival Center, located north of the temple, is available for nonpatron family and friends. There are also facilities for patrons to freshen up and change clothes prior to entering the temple. Secure lockers are provided. There is a mother's room and an area designed for children to enjoy Church-approved films. An adult chaperone, 18 years of age or older, should care for children who are not participating in ordinances or who are waiting for a scheduled sealing.

The Nauvoo Illinois Temple is a reconstruction of the original Nauvoo Temple built in the 1840s and destroyed by fire in 1848.

Unlike many temples of The Church of Jesus Christ of Latter-day Saints, the Nauvoo Illinois Temple and its statue of the angel Moroni face west, overlooking the Mississippi River.

The largest temple baptismal font in the Church is located in the Nauvoo Illinois Temple.

The Nauvoo Illinois Temple is one of only six temples where patrons progress through four ordinance rooms before passing into the Celestial Room. (The other five temples are the Laie Hawaii Temple, the Cardston Alberta Temple, the Mesa Arizona Temple, the Idaho Falls Idaho Temple, and the Los Angeles California Temple.)

President Gordon B. Hinckley, who presided at the groundbreaking ceremony for the Nauvoo Illinois Temple, had presided at the second day of dedicatory sessions for the Detroit Michigan Temple earlier that day.

During its six-week public open house, the Nauvoo Illinois Temple was thronged by 331,849 visitors eager to tour the interior of the extraordinary edifice.

The Nauvoo Illinois Temple was dedicated on the very day and hour of the anniversary of the martyrdom of the Prophet Joseph Smith.

The dedication of the Nauvoo Illinois Temple was delivered over the Church's encrypted satellite system to Church buildings around the world.

"Today, facing west, on the high bluff overlooking the city of Nauvoo, thence across the Mississippi, and over the plains of Iowa, there stands Joseph’s temple, a magnificent house of God. Here in the Salt Lake Valley, facing east to that beautiful temple in Nauvoo, stands Brigham’s temple, the Salt Lake Temple. They look toward one another as bookends between which there are volumes that speak of the suffering, the sorrow, the sacrifice, even the deaths of thousands who made the long journey from the Mississippi River to the valley of the Great Salt Lake." —Gordon B. Hinckley

At the closing session of general conference on April 4, 1999, President Gordon B. Hinckley made an announcement that sent shock waves through the worldwide audience: "I feel impressed to announce that among all of the temples we are constructing, we plan to rebuild the Nauvoo Temple. A member of the Church and his family have provided a very substantial contribution to make this possible. We are grateful to him. It will be a while before it happens, but the architects have begun their work." He added: "The new building will stand as a memorial to those who built the first such structure there on the banks of the Mississippi."1

Following this announcement, extensive research was conducted on the original Nauvoo Temple including the examination of photographs, written descriptions, and drawings—some of which were donated by the descendants of William Weeks who was the architect of the original temple. Keith Stepan, managing director of the Temple Construction Department said: "Piecing everything together, we think the outside of the new temple is as close as humanly possible to the original." One obvious difference would be the decision to use a standing angel atop the tower instead of a horizontal angel as was used on the original.2

The original baptismal font, supported by 12 carved limestone oxen, was also duplicated as nearly as possible with the addition of a fiberglass lining to prevent deterioration. The floor of the baptistry, the largest of any temple in the Church, was finished in red brick tile (as in the original temple). A dome and chandelier are featured in the ceiling and art glass window on the east end. Intricate moldings are attached along the ceiling.

The Allyn Historic Sash Company in Nauvoo had charge over the different-sized arched windows and round windows near the temple's roof line that include framework for six-pointed stars. Red, white, and blue glass was used to replicate the originals. All but 11 of the total 138 installed windows were constructed by the Allyn House.3

The limestone used for the original temple was quarried from a site just west of the temple. Much of that quarry, however, was submerged by rising water behind the Keokuk Dam in 1912. Therefore, Russellville, Alabama, subsidiary of Minnesota's Vetter Stone Company, was chosen by the Church to provide stone for the temple. Church officials say the quarry was selected because it will provide stone that is a close match to the limestone originally used.4

The floors are hardwood with rugs, runners, and furnishings typical of the time. The first floor Assembly Room, featuring ten chandeliers, was duplicated on a smaller scale allowing enough area for planned administrative offices. The second floor has dressing rooms, and the upper floors house the six sealing rooms and instruction rooms, which were arranged in progressive style to include a Creation Room, Garden Room, World Room, Terrestrial Room, and Celestial Room. The use of ordinance room murals was reintroduced for the first time since the Los Angeles California Temple (1956).

A little more than 153 years ago, Latter-day Saints had to abandon the temple they had recently dedicated. Soon, President Hinckley said, "there will grace this site a magnificent structure, a re-creation of that which existed here and served our people so briefly during that great epic [Nauvoo] period of the history of the Church." Looking back on that era of Church history, not long after the Prophet was martyred, President Hinckley said, "I can just see the people in 1846, the wagons that bitter, bitter cold day going down Parleys Street to the water's edge, getting on a barge, moving across the [Mississippi River] up on to the higher ground and looking back on this sacred structure which they had labored so hard to build and realized that never in this life would they see it again. It is difficult to imagine their emotions."

President Hinckley called the time of the groundbreaking a "happy day" in Nauvoo "where it all really began." He noted that although the Kirtland Temple was the first built in this dispensation, "there was no ordinance work in that temple," as there was during a brief period in the Nauvoo Temple.

Referring to the Nauvoo Temple as beautiful and large, he shared an experience from an earlier visit when Elder Hugh W. Pinnock of the Seventy and North America Central Area president used weather balloons on the temple lot to outline the area and height of the sacred building. "I was amazed at the height of it," President Hinckley said. "I knew the dimensions in feet, but I'd never envisioned that height." The temple will be built again to that height and with the same exterior look as the original, he said, funded largely by contributions "from those who love the Lord and love this work." Noting some changes in construction from the original, he said it will be built of reinforced concrete faced with the same kind of stone as the original. "It will be stronger and will last a very long time," he said. "I hope to live long enough to participate in the dedication of this wonderful building which means so very much in the history of this Church, in the history of my family, in the history of your families, so very, very many of you who are gathered here today."

The idea of rebuilding the temple is not a new one. President Hinckley said that his father, while president of the mission that included Nauvoo in 1939, suggested to the First Presidency that the Nauvoo Temple be rebuilt. But the idea wasn't accepted at that time when the country was just coming out of the Depression and the Church didn't have a lot of money. His father was disappointed at that time, President Hinckley said, adding, "But I count it something of a strange and wonderful coincidence that I've had a part in the determination of rebuilding this temple."

President Hinckley continued his remarks: "This will be the House of the Lord. It will be dedicated as His Holy House. It will be reserved and set aside for the accomplishment of His divine and eternal purposes. It will occupy a special place in the belief and testimony and the conviction of this people. It will have great historic significance. It will be a thing of beauty and, I hope, a joy forever."5