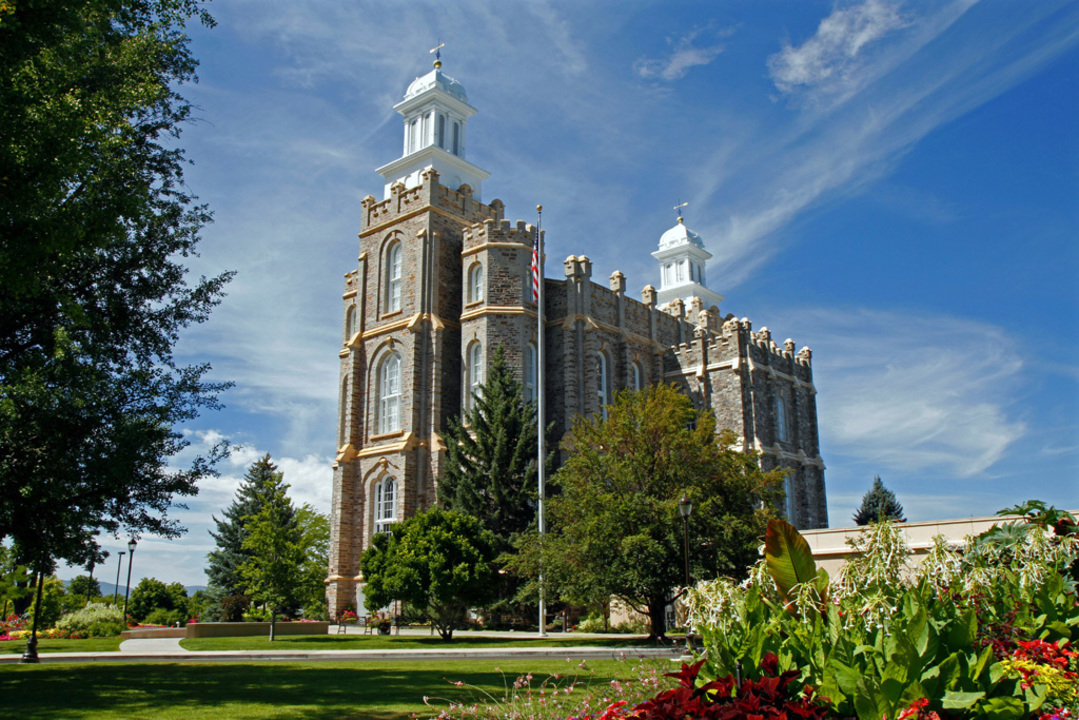 The Logan Utah Temple stands prominently on an elevated terrace—visible for miles throughout northern Utah's Cache Valley. Occupying an entire city block, the site features charming gardens and an oval reflecting pool on the east side and a huge grassy hill on the west. Just two blocks from the temple is the historic Logan Tabernacle, located on highly traveled Highway 91.

The Logan Utah Temple was the second temple built in Utah.

The Logan Utah Temple was the first temple built with progressive-style muraled ordinance rooms for live-acting presentation of the endowment ceremony.

The Logan Utah Temple was the only temple dedicated by President John Taylor.

The Logan Utah Temple was originally named the Logan Temple.

The presentation of the endowment was originally delivered by live acting in the Logan Utah Temple.

During a visit by the prophet, President Brigham Young, on August 22, 1863, Elder Wilford Woodruff spoke to the young people gathered and foretold of the coming of the Logan Utah Temple. He said: "You should never forget this visitation. You are to become men and women, fathers and mothers; yea, the day will come, after your fathers, and these prophets and apostles are dead, you will have the privilege of going into the towers of a glorious Temple built unto the name of the Most High (pointing in the direction of the bench), east of us upon the Logan bench; and while you stand in the towers of the Temple and your eyes survey this glorious valley filled with cities and villages, occupied by tens of thousands of Latter-day Saints, you will then call to mind this visitation of President Young and his company."

The five-story Logan Utah Temple was built entirely by volunteer labor over a seven-year period from 1877 to 1884.

The exterior walls of the Logan Utah Temple were originally painted a pinkish off-white color to hide the dark, rough-hewn limestone. In the early 1900s, however, the paint was allowed to weather away, uncovering the beautiful stone that characterizes the temple today.

In 1897, a square two-story stone barn was constructed on the block east of the Logan Utah Temple to house the animals of traveling patrons and workers. The structure fell out of use in the 1910s due to the proliferation of automobiles and was sold. For a time, it was used as an automobile repair shop, but it has since stood vacant for decades. The historic structure, which stands at 368 East 200 North, was placed on the National Register of Historic Places on December 19, 1985.

On the evening of December 4, 1917, fire broke out in the Logan Utah Temple, engulfing the grand staircase, destroying several windows and paintings, and causing extensive smoke and water damage. The origin of the fire was discovered to be electrical wiring.

The Logan Utah Temple was floodlighted at night for the first time during the month of May 1934 as part of the temple's Golden Jubilee celebration. Everyone entering the valley was astonished by the brilliant spectacle. Thirteen years would pass before the temple was lit again on the temple's 63rd anniversary—this time with an elaborate permanent system.

In 1976, the Logan Utah Temple was closed for over two years for a complete reconstruction of the interior that significantly increased its capacity. Despite the strong objections put forth by members who treasured the handcrafted interior and pioneer-era artwork, the historic temple was gutted and the roof removed, leaving only the exterior walls standing. The new 1970s-style interior was patterned after the recently completed Ogden Utah Temple and Provo Utah Temple. The muraled progressive-style ordinance rooms were replaced with wallpapered stationary rooms equipped for motion-picture presentation of the endowment. President Spencer W. Kimball, who rededicated the temple in 1979, regretted the need to rebuild the interior because of the loss of pioneer craftsmanship.

In 2009, the Logan Utah Temple grounds were renovated, replacing the 1970s-style water feature with a pioneer-inspired oval reflecting pool. The new design incorporated several steps to serve as photograph areas and added heated sidewalks to combat the ample snowfall experienced in Cache Valley.