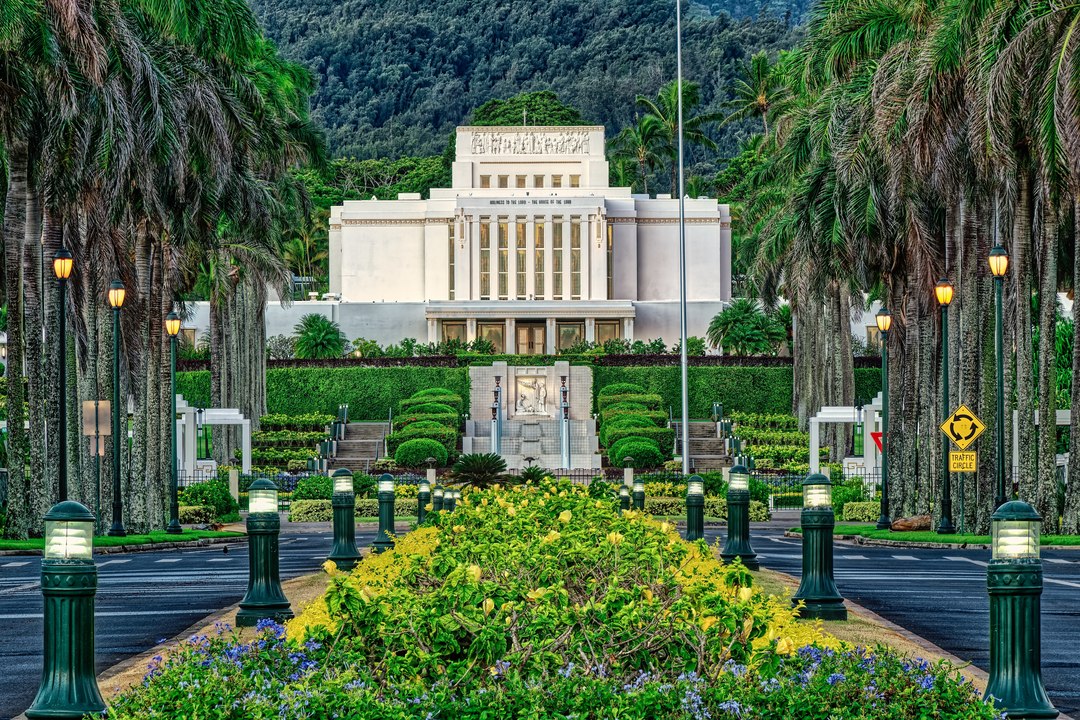 © Marvin A. Rivera. All rights reserved.

Concrete made of native crushed lava rock and coral, reinforced with steel. It is dressed by pneumatic stone cutting tools to produce a white cream finish

Surrounded by lush Hawaiian flora on a gently rising hill that features cascading pools and a large fountain, the Laie Hawaii Temple graces the north shore of Oahu just a half mile from the Pacific Ocean. Travelers along Kamehameha Highway can't miss the striking Hale Laa Boulevard that leads the short distance from the highway to the temple. The exquisite boulevard features a tropical garden on one end and palm trees and decorative lights on the other. Sharing the temple grounds is a highly visited public visitors' center. Down the street is Church-owned Brigham Young University–Hawaii and Hawaii's number-one paid attraction, the Polynesian Cultural Center.

The Laie Hawaii Temple was the first temple built in the Pacific islands (and in the state of Hawaii).

The Laie Hawaii Temple was the first temple built outside of the continental United States.

The Laie Hawaii Temple is one of only six temples where patrons progress through four ordinance rooms before passing into the Celestial Room. (The other five temples are the Cardston Alberta Temple, the Mesa Arizona Temple, the Idaho Falls Idaho Temple, the Los Angeles California Temple, and the Nauvoo Illinois Temple.)

The presentation of the endowment was originally delivered by live acting in the Laie Hawaii Temple.

At just 10,500 square feet, the Laie Hawaii Temple was the smallest temple the Church had ever constructed, though it has since been enlarged to over 40,000 square feet.

The Laie Hawaii Temple sits on the Church's original landholdings in Hawaii known as Laie Plantation. The 6,000-acre parcel was purchased in 1865 for $14,000.

The concrete exterior of the temple was created using crushed rock and coral.

The Laie Hawaii Temple was dedicated sixteen years before the creation of the first Hawaiian stake on Oahu in 1935.

President Joseph F. Smith was in Hawaii on business in the spring of 1915 when he was moved by a spiritual impulse to dedicate a site for the Laie Hawaii Temple. The action was later ratified by the brethren and publicly sustained in the October 1915 General Conference.

Before construction of the Laie Hawaii Temple could begin, the existing 30-by-90-foot chapel had to be relocated over a period of days using jacks, tackle, ropes, horses, steel pipe, and timbers to pull and push the nine-ton building down the hill. The building was later lost to fire on July 11, 1940, during a renovation project.

Construction of the temple came to a standstill when the supply of lumber ran out. Prayers were uttered, and two days later, a freighter was discovered stranded on a nearby coral reef. The captain offered his entire cargo to the saints if they would unload it for him. His cargo? Lumber—enough to complete the temple.

The Laie Hawaii Temple was dedicated on Thanksgiving Day by President Heber J. Grant, just one year after the passing of President Joseph F. Smith who had dedicated the site and had served as a missionary in Hawaii at the tender age of 15.

In May 1976, the Laie Hawaii Temple closed for two years for extensive remodeling that provided a new front entrance, enlarged patron and administrative facilities, and converted the progressive-style ordinance rooms to stationary rooms equipped for motion-picture presentation of the endowment.

In December 2008, the Laie Hawaii Temple closed again for two years for structural and seismic upgrades and for restoration of the ordinance rooms to their original progressive-style presentation of the endowment (still using video). The baptistry was repaired and renovated.