3rd dedicated temple in operation; closed for renovation; excavating behind the temple; estimated to be completed in 2024 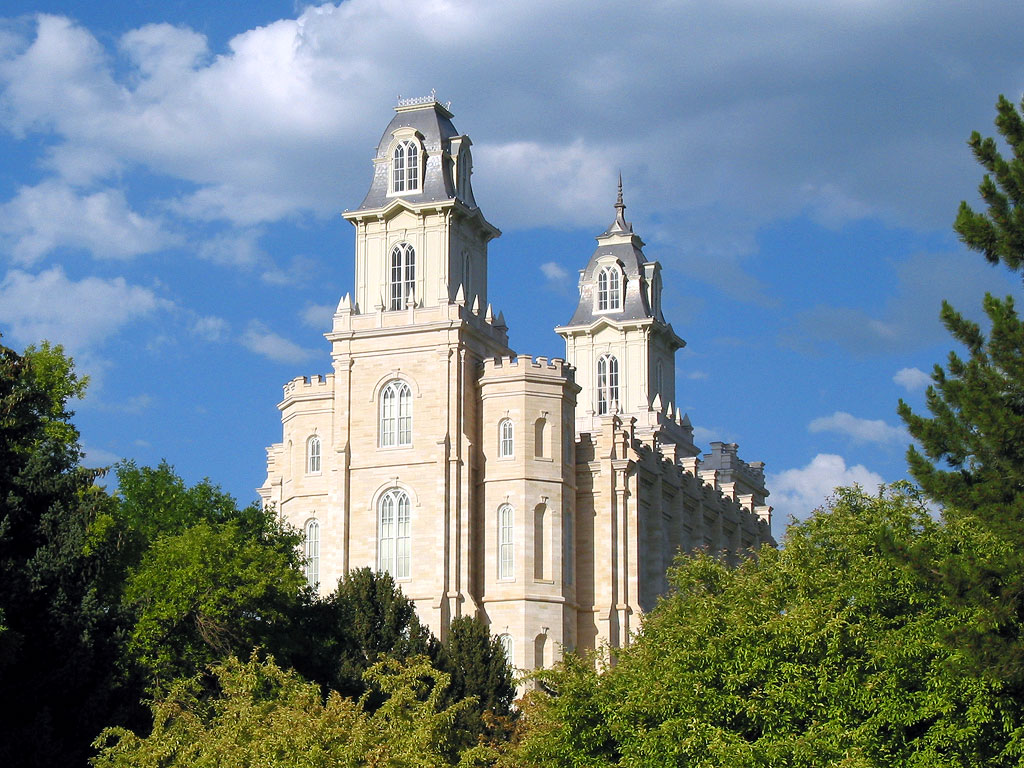 Fine-textured, cream-colored oolite limestone obtained from quarries in the hill upon which it stands

On October 2, 2021, the Manti Utah Temple closed for a major, multi-year renovation. Modified plans for the renovation (originally announced on March 12) were presented at a press conference held on Saturday, May 1, at the Manti Tabernacle where a prerecorded message by President Russell M. Nelson was shown.1 Highlights of the project include the following:

Perched atop a rising knoll, known as "Temple Hill," the magnificent Manti Utah Temple dominates the Sanpete Valley of Central Utah. Located just off Highway 89, approaching travelers can glimpse the distinctive towers from miles and miles away. Across the highway from the temple is the Pioneer Heritage Center and Gardens—a 2.5-acre park featuring a reflecting pool for the temple, meandering walkways with park benches, an amphitheater, finely crafted statues, and beautiful landscaping.

The Manti Utah Temple was the third temple built in Utah.

The Manti Utah Temple was the only temple dedicated by President Lorenzo Snow.

The Manti Utah Temple was originally named the Manti Temple.

The Manti Utah Temple was built on a rattlesnake-infested site, known as the Manti Stone Quarry. Once Brigham Young designated the site for a temple, it became known as Temple Hill. The quarry's stone, Manti oolite, is the same cream-colored stone used for the temple exterior.

Twin self-supporting, open-centered spiral staircases wind five stories up each of the octagonal towers on the west side of the Manti Utah Temple. No joints can be felt in the walnut hand railings due to the expert skills employed. The dramatic stairways are considered an engineering marvel of the pioneer Latter-day Saints.

A large arching tunnel under the east tower of the Manti Utah Temple, which has since been closed, allowed cars to pass from one side of the temple to the other.

The presentation of the endowment was originally delivered by live acting in the Manti Utah Temple.

Lightning struck the east tower of the Manti Utah Temple in 1928, which started a fire that burned for three hours before it could be extinguished.

Murals in the Manti Utah Temple were repainted in the 1940s when the deterioration of wall plaster meant the garden and world room murals by Danquart Weggeland and C.C.A. Christensen could not be saved. Robert L. Shepherd painted the Garden Room, and Minerva Teichert painted the World Room with scenes depicting Biblical stories of the Tower of Babel, Abraham, Joseph in Egypt, Moses, and Esau; worldwide expansion of the Pilgrims, oriental traders, European crusaders, and Christopher Columbus; and the North American continent with a Native American, fur trapper, pilgrim, and city of Zion.

In 1985, the Manti Utah Temple was formally rededicated following a four-year renovation project that included updating the auxiliary systems; adding three sealing rooms, new dressing rooms, a nursery, and offices; restoring the pioneer craftsmanship and artwork to their former glory; and extensively renovating the baptistry including the addition of an exterior entrance. Apartments for temple workers were also constructed during the renovation. The three-day open house was attended by 40,308 visitors.

In 2019, the annual Mormon Miracle Pageant was held on the grounds of the Manti Utah Temple for the last time, following a 53-year run.

"Temple. One other word is equal in importance to a Latter-day Saint. Home. Put the words holy temple and home together, and you have described the house of the Lord!"
—Boyd K. Packer