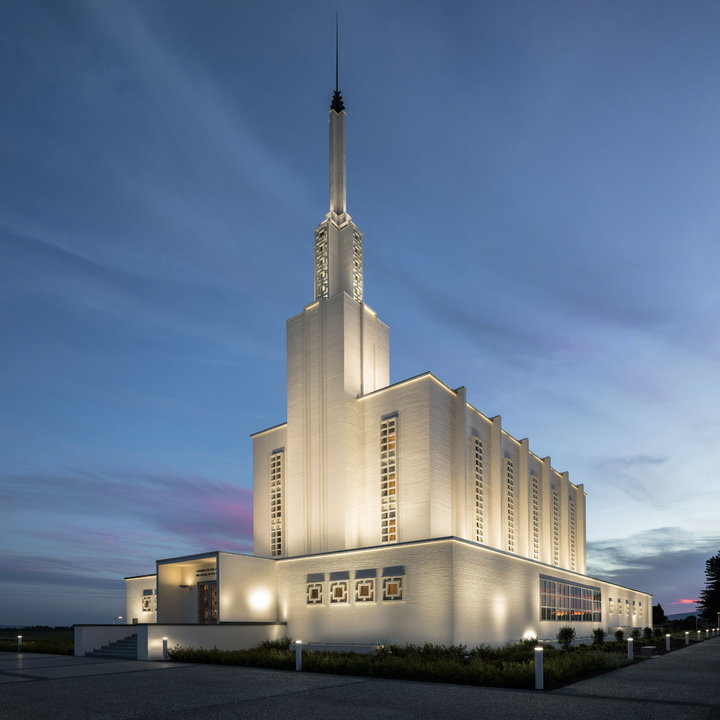 Situated atop a stately hill in the rural outskirts of Hamilton, the Hamilton New Zealand Temple overlooks the 86 acres it shares with the former Church College of New Zealand—a Church-operated school for students ages twelve to eighteen that permanently closed in December 2009 after 51 years of operation. At the base of the hill is a popular public visitors' center, surrounded by beautifully manicured gardens. Guides are available to answer questions and direct visitors to the numerous displays on site including a magnificent replica of the Christus statue. At Christmastime, the grounds are filled with a dazzling spectacle of lights and displays.

The Hamilton New Zealand Temple was the first temple built in the Southern Hemisphere and second built in Polynesia, following the Laie Hawaii Temple (1919).

The Hamilton New Zealand Temple is a sister building to the Bern Switzerland Temple.

The Hamilton New Zealand Temple was originally constructed with a single auditorium-style ordinance room equipped with motion-picture presentation of the endowment.

The original floor plan of the Hamilton New Zealand Temple featured 75 rooms on three levels. The basement housed the baptistry, offices, dressing rooms, dining rooms, kitchen, and laundry. There were 24 rooms on the main floor including the chapel, waiting rooms, entries, foyers, and general offices. The upper floor consisted of ten rooms including the single instruction room, the Celestial Room, and four sealing rooms.

The Hamilton New Zealand Temple features beautiful murals on the walls of its Celestial Room. (Only two other temples feature full Celestial Room murals: the Idaho Falls Idaho Temple and the Los Angeles California Temple. The corner pillars in the Logan Utah Temple Celestial Room portray a heavenly landscape, too.)

The Hamilton New Zealand Temple was dedicated about five months before the London England Temple, marking the first time that two dedications were held in the same year.

The Church College of New Zealand was dedicated six days after the dedication of the adjoining Hamilton New Zealand Temple.

The first stake in New Zealand was created the month after the dedication of the Hamilton New Zealand Temple in the city of Auckland, about 80 miles north of Hamilton.

For a time, the Hamilton New Zealand Temple offered overnight endowment sessions from Friday through Saturday to accommodate the many members who came on the weekend.

The Hamilton New Zealand Temple closed in 1993 for two months to replace wall coverings and furnishings. In 1994, the temple closed again for 9 months for a more extensive renovation that included installation of air conditioning and removal of asbestos.

In 1954, general authorities approved the construction of a temple for an undetermined location in the South Pacific. President David O. McKay assigned Wendell B. Mendenhall, president of the San Joaquin Stake in California, to investigate possible temple sites. While in New Zealand, President Mendenhall investigated available property in Auckland where the mission was headquartered. "Then one day I felt I should go to Hamilton to visit the college," he related. "While in the car on the way, the whole thing came to me in an instant. The temple should be there by the college. The Church facilities for construction were already there, and that was the center of the population of the mission. Then, in my mind, I could see the area even before I arrived, and I could envision the hill where the temple should stand. As soon as I arrived at the college and drove over the top of the hill, my whole vision was confirmed. In my heart I felt that the Lord had especially made this hill for his temple, everything, about it was so majestic and beautiful."

Two weeks later, President McKay arrived during a two-month tour of the Pacific including Fiji, Tonga, Samoa, American Samoa, Tahiti, New Zealand, and Australia. President Mendenhall was accompanied by three other brethren to greet the prophet, so no mention of the temple site could be made. The five of them drove to the Church college and farm lands on the outskirts of Hamilton. After stepping out of the car, President McKay called President Mendenhall to one side. "What do you think?" the prophet asked, referring to the distinguished hill. "What do you think, President McKay?" came the reply. He pronounced in an almost prophetic tone: "This is the place to build the temple."

Upon President David O. McKay's return to Church headquarters from his two-month tour of the Pacific, he recommended that the temple be constructed near the Church college in Hamilton, New Zealand, where the setting was ideal for a spiritual and educational center. That recommendation was approved by the First Presidency and Quorum of the Twelve Apostles on Thursday, February 17, 1955, after which the decision was made public.

President Ariel S. Ballif, president of the New Zealand Mission, presided at the groundbreaking services for the Hamilton New Zealand Temple at 2:00 p.m. on December 21, 1955. The event was held on the majestic 170-foot high hill where the temple would be constructed, providing a beautiful view of the Church college. The groundbreaking also served to commemorate the construction of two new buildings on campus: the David O. McKay Auditorium Building and the Matthew Cowley Memorial Administration Building. Over 600 people were in attendance, representing all of the districts in the mission (as no stakes had yet been organized). In his site dedicatory prayer, President Ballif called down the blessings of the Lord on those workers who would be involved in erecting the temple and college buildings and that the structures would be constructed quickly and used for the development of the lives of the people there.1

Prior to the dedication of the Hamilton New Zealand Temple, some 112,500 visitors toured the temple during a three-week open house held March 28 through April 19, 1958.

On April 18, 1955, President David O. McKay arrived in Hamilton where he, his wife, and accompanying authorities witnessed an animated performance in a large natural amphitheatre between the temple and the college. About eight thousand people witnessed the spectacle from the surrounding hillsides that featured a savage-looking individual in a beaded skirt and head ornament who threw a staff in front of the President McKay and a hatchet in front of Sister McKay. By picking up the items, they were assuring peace instead of war, which brought smiles to the fierce face. Elaborate performances by Maoris, Samoans, and Tongans followed. At the conclusion of the program, President McKay expressed his gratitude for the welcoming and interesting demonstrations.2

Six dedicatory sessions were held for the Hamilton New Zealand Temple—two each day from April 20–22, 1958. President David O. McKay spoke at each session and gave the dedicatory prayer. He prayed: "We dedicate the grounds upon which the Temple stands, and by which it is surrounded; the walks, ornamental beds, the trees, plants, flowers, and shrubbery that grow in the soil; may they bloom and blossom and become exceedingly beautiful and fragrant, and may Thy spirit dwell in the midst thereof that this plot of ground may be a place of rest and peace for holy meditation and inspired thought."

On July 23, 2018, the Hamilton New Zealand Temple closed for an extensive renovation project that included seismic strengthening, upgrades to electrical and mechanical systems, improvements to the floor plan, and replacement of all finishes and furnishings. Accompanying facilities were also upgraded including the parking lot, patron and missionary housing, and visitors' center.3

A three-week open house was held prior to the rededication of the Hamilton New Zealand Temple from August 26 through September 17, 2022. More than 55,000 guests toured the interior including media and dignitaries. Martin Gallagher, a former Member of Parliament and Deputy Mayor, shared his memories of the Latter-day Saints who built the temple in the 1950s: "Their families, in many cases, have come on to make huge contributions to our society at large. Genuinely, even though I am not a member of the Latter-day Saints faith community, I absolutely honor them."4

Elder Dieter F. Uchtdorf of the Quorum of the Twelve Apostles presided over the rededication of the Hamilton New Zealand Temple in three sessions on Sunday, October 16, 2022. He said of the occasion, "This is a day to remember, a rare and sacred spiritual day to write about and tell our families and posterity, a day of new beginning and celebration." President Russell M. Nelson participated from Salt Lake City by broadcast. He said when a temple is dedicated, it strengthens the Saints, adds light to the world, and lessens the power of the adversary.5

The historic painted concrete masonry on the exterior of the temple remained unchanged in the renovation. The blocks were manufactured on site by the original construction crew, most of whom were labor missionaries who donated their time.

Historically, an acid-etched glazing was present on the exterior. This historic glass type was restored during the renovation.

The existing steel and masonry fencing around the perimeter of the site was not changed during the renovation. The walkways and main entry plaza are finished concrete with concrete masonry pavers.

Most of the carpet in the building is a simple loop pattern woven in nylon in a soft green color. It is manufactured by Bentley Mills in California. The carpets in the celestial room and sealing room are a nylon-cut pile broadloom in a soft cream color, also woven by Bentley Mills. The wool area rugs in the lobby and bride’s room were designed by NWL Architects in Salt Lake City. The stone used in the flooring throughout the building is a light yellowish cream limestone called Butter Silk that was quarried in Palestine.

The patterns were derived from local Maori patterns used in weavings, bone carvings, and wood carvings. The design was done by NWL Architects in Salt Lake City, Utah.

The lights in the temple are a combination of metal and opal glass or crystal done in a clean mid-century style. The fixtures were designed by NWL Architects in Salt Lake City and were supplied by Ciana Lighting of Heber City, Utah.

The millwork and casework is made of Victorian Oak with a slightly tinted stain. It was created and installed by Fernlea Cabinetry & Joinery in Hamilton.

The original font was restored during the renovation. The font and oxen were made in Switzerland using the same molds as the Swiss Temple. The railings are decorative bronze following the historic railing patterns found in the temple. The railings for the stairs leading to the font are bronze with beveled glass panels, while the railing into the font itself is stainless steel.

The pattern for the door hardware is a stylized silver fern designed by NWL Architects in Salt Lake City and supplied by Sopersmac of New Zealand.

Most of the walls in the building feature a vinyl covering that will be durable and easy to maintain. Most are simple textures in creamy and gold colors. The walls in the instruction rooms have a stylized fern-like pattern reflective of local Maori patterns. The wall coverings are all standard products from mills in the United States. The Celestial Room walls feature a historic mural that was not removed during the renovation.

The majority of the ceilings in the temple are painted gypsum board on steel framing. Most ceilings are flat or have minimal stepping, which reflects the historicity of the original temple. In more sacred areas of the temple, there is a decorative paint pattern or simple gold linework on the ceiling with plaster moldings around the perimeter.