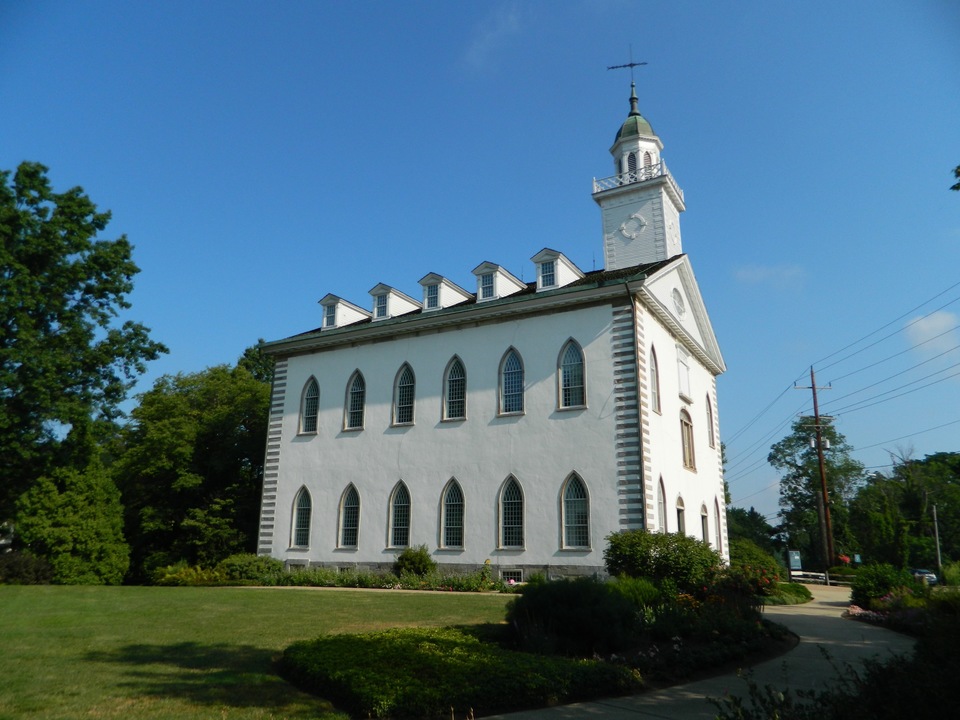 The Kirtland Temple stands on a bluff in northeastern Ohio, about 25 miles east of Cleveland, overlooking the beautiful Chagrin Valley. Owned and operated by the Community of Christ (the former Reorganized Church of Jesus Christ of Latter Day Saints), the Kirtland Temple is open for tours to members of all faiths. Several sites and buildings have been restored in Historic Kirtland by The Church of Jesus Christ of Latter-day Saints, which bring to life the story and the spirit of the early Kirtland Saints.

The Kirtland Temple was the first temple erected in this dispensation.

The School of the Prophets, a forerunner to temple worship, was established three years before the dedication of the Kirtland Temple. The school met in a room above the Newel K. Whitney Store.

The early Saints referred to the Kirtland Temple as simply the "Lord's House," as the term temple was not in general use at the time.

Log construction was proposed for the Kirtland Temple in early discussions.

The design for the Kirtland Temple was received by detailed revelation to the Prophet Joseph Smith and others. The temple included a lower hall for worship and an upper hall for education. Both featured pulpits on either end with initials representing priesthood offices.

During construction, the Kirtland Temple was guarded at night to protect the building from threatening mobs and vandals.

The Saints crushed glass and chinaware into the stucco applied to the exterior walls of the Kirtland Temple, which glittered in the sun.

At the dedication of the Kirtland Temple, the Saints experienced an outpouring of heavenly manifestations including visions, prophecies, the gift of tongues, and the appearance of angels. About that day, Joseph Smith wrote: "Brother George A. Smith arose and began to prophesy, when a noise was heard like the sound of a rushing mighty wind, which filled the Temple, and all the congregation simultaneously rose, being moved upon by an invisible power; many began to speak in tongues and prophesy; others saw glorious visions; and I beheld the Temple was filled with angels, which fact I declared to the congregation. The people of the neighborhood came running together (hearing an unusual sound within, and seeing a bright light like a pillar of fire resting upon the Temple), and were astonished at what was taking place."1

On Easter Sunday, April 3, 1836, during the Jewish Passover, the Lord appeared to Joseph Smith and Oliver Cowdery in the Kirtland Temple, accepting His house. Priesthood keys were then restored through three ancient prophets: Moses, the keys to the gathering of Israel; Elias, the dispensation of the gospel of Abraham; and Elijah, the sealing keys.

The ordinances received in the Kirtland Temple were only a partial endowment. The full endowment would not be received until the Saints settled in Nauvoo.

Two years after the dedication of the Kirtland Temple, the Saints had largely abandoned Kirtland, and the temple became the venue of both private worship and public function. The temple was later leased for many years as a public school.

In 1880, the Community of Christ reestablished ownership of the Kirtland Temple, and the building was restored as closely as possible to its original condition.