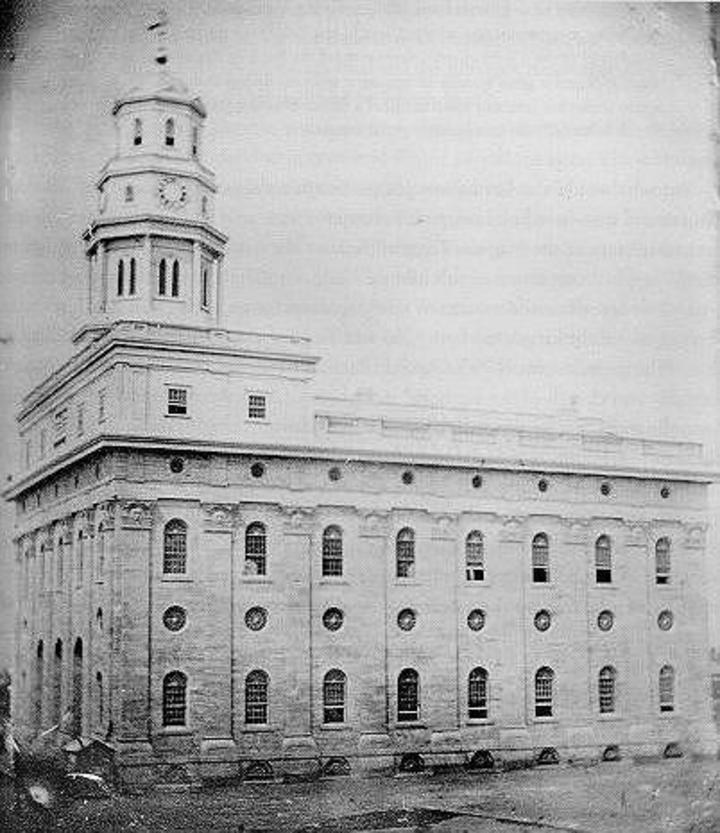 The original Nauvoo Temple, rebuilt in 2002 as the Nauvoo Illinois Temple, stood on a high bluff overlooking a bend in the Mississippi River. It occupied a city block bounded by Woodruff, Mulholland, Knight, and Wells streets. Just two years after its dedication, the Nauvoo Temple was tragically destroyed by arson fire in 1848, leaving only the charred exterior walls. In 1850, the walls were terribly damaged by a tornado, leaving the west facade to stand for a few years until the crumbling remnants were razed.

"I have seen in vision the splendid appearance of that building illuminated, and will have it built according to the pattern shown me." —Joseph Smith, Jr.

"I was in Nauvoo on the 26th of May, 1846, for the last time, and left the city of the Saints feeling that most likely I was taking a final farewell of Nauvoo for this life. I looked upon the temple and city as they receded from view and asked the Lord to remember the sacrifices of His Saints." —Wilford Woodruff

"The Lord has beheld our sacrifice: come after us." —Written by a group of Latter-day Saints on the wall of the assembly hall in the temple just before leaving Nauvoo

"Many were the blessings we had received in the house of the Lord, which has caused us joy and comfort in the midst of all our sorrows and enabled us to have faith in God, knowing He would guide us and sustain us in the unknown journey that lay before us. For if it had not been for the faith and knowledge that was bestowed upon us in that temple by the influence and help of the Spirit of the Lord, our journey would have been like one taking a leap in the dark. To start out on such a journey in the winter as it were and in our state of poverty, it would seem like walking into the jaws of death. But we had faith in our Heavenly Father, and we put our trust in Him feeling that we were His chosen people and had embraced His gospel, and instead of sorrow, we felt to rejoice that the day of our deliverance had come." —Sarah DeArmon Pea Rich

The Nauvoo Temple was the first temple built in Illinois.

The Nauvoo Temple is one of two latter-day temples to have been destroyed and rebuilt. (The other is the Apia Samoa Temple.)

The practice of baptisms for the dead was restored in this dispensation through the Prophet Joseph Smith in Nauvoo. Such baptisms were first performed in the Mississippi River until the baptismal font of the Nauvoo Temple was dedicated.

On May 4, 1842, the first full endowments of this dispensation were given in Nauvoo in the upper room of Joseph Smith's Red Brick Store, which was used as an endowment room until the Nauvoo Temple was completed. The Relief Society was organized there on March 17, 1842.

A series of private dedications were held as portions of the Nauvoo Temple were completed including a dedication of the basement and baptismal font on November 8, 1841, by Brigham Young; the attic rooms for ordinance work on November 30, 1845; the sealing altar on January 7, 1846; and the temple "thus far completed" on February 8, 1846, just prior to the Saints' exodus to the West.

On October 9, 1848, the Nauvoo Temple was deliberately set on fire and destroyed, apparently in an act to discourage the Saints who had recently fled to the west to never return to Nauvoo. A local newspaper reported: "The fire presented a most sublime spectacle. It commenced in the cupola, and as the flames shot up to the sky, they threw a lurid glare into the surrounding darkness. Great volumes of smoke and flame burst from the windows, and the crash of falling timbers was distinctly heard on the opposite side of the river. The interior of the building was like a furnace; the walls of solid masonry were heated throughout and cracked by the intense heat. The melted zinc and lead was dropping from its huge block during the day. On Tuesday morning the walls were too hot to be touched. The naked walls still stand, and if not demolished by the hand of man, for centuries may stand."1

In the spring of 1849, the Nauvoo Temple block was purchased by French Icarians, a religious communal group that had recently arrived in the area. They intended to refit the charred walls of the temple for a school and other community purposes. By the spring of 1850, they had made preparations for installing a new roof and floors. A steam mill was purchased, a saw mill was nearly finished, and a large shed was going up to shelter the carpenters.

In the midst of these preparations, on May 27, 1850, a tornado struck the temple site while eight men were working inside the temple remains. A Missouri newspaper reported: "[T]he masons were laying in the interior the bases of the pillars, when this frightful hurricane, the most terrible experienced in the country in many years, burst suddenly on the hill of Nauvoo, where lightnings, thunder, wind, hail and rain, seemed united to assail the building. The storm burst forth so quickly and with such violence that the masons, overtaken unawares in the Temple, had not time to flee before the northern wall, sixty feet high, bent down over their heads, threatening to crush and bury them up."2 The next morning, the Icarian community decided to bring down the damaged east and south walls of the temple because of the safety hazard they posed.

For several years afterward, all that remained of the Nauvoo Temple was the crumbling west facade. Joseph Smith III wrote that "the walls kept falling from time to time, bit by bit," until only the southwest corner remained. Ultimately, the City Council of Nauvoo advised that the remaining portion of the temple be razed, and the temple's destruction became complete. Of the years that followed, Joseph Smith III said: "[T]here was a gradual spoilation of the ruins of the Temple, to which I was a witness. The place became a veritable quarry and provided the materials with which many homes, wine cellars, and saloons in the town were built. At last the time came when the last stone was upturned from its resting place and taken away, and little remained to indicate the spot where once the magnificent and stately edifice had reared its proud head." 3

"And thou shalt make a plate of pure gold, and grave upon it, like the engravings of a signet, HOLINESS TO THE LORD."
—Exodus 28:36