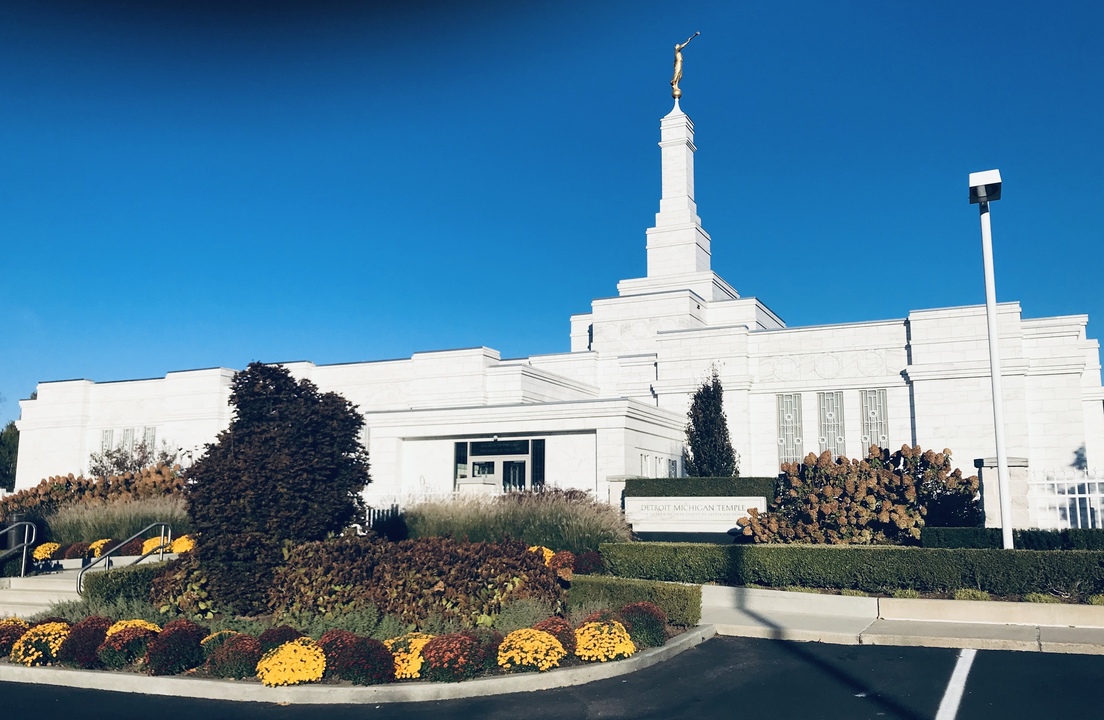 The Detroit Michigan Temple was the first temple built in Michigan.

When the day of dedication for the Detroit Michigan Temple arrived, so did a cold front that brought a frigid wind and occasional showers of freezing rain. "For the members, it's a warm day," Bloomfield Hills Michigan Stake President Thomas C. Bithell said optimistically. Pointing to the temple, he said, "There's lots of sunshine inside."

During the days of dedication, President Hinckley spoke with the Church News of the temple district's members: "They appreciate it very much. They have indicated that they're so deeply grateful for this sacred structure and we, too, are happy that it has been erected here and dedicated and that the work of the Lord now goes forward here in this part of the earth." President Hinckley also noted that Stephen Mack, a brother of Joseph Smith's mother, Lucy, "surveyed the first road through what became Detroit." Many members pointed out the road in front of the temple as the one Stephen Mack built. The Prophet Joseph Smith, his brother Hyrum and his father, Joseph Smith Sr., visited the Detroit area in 1834, and because of the location of the road and its relationship to the Prophet's uncle, "it would seem likely to me that they went by the temple site," President Bithell said.

The roadway running in front of the temple, eight-lane Woodward Avenue, is one of the Detroit area's major thoroughfares. It gives the temple good exposure to passers-by, but it is remains unobtrusive because of its well-landscaped parkway and location behind a large, grass-covered buffer.

The temple site in Bloomfield Hills was one of the last considered during the search for a suitable site. President Bithell, who was in charge of finding a site, explained that he considered property behind the stake center, but it wasn't selected because the temple would be hidden behind the meetinghouse, and the property to the north of the stake center was assumed to be too small. But after considering several properties near other meetinghouses, Pres. Bithell again looked at the tree-covered lot outside his office window and wondered about the northward property. It was measured "and it was just perfect," he said. He said the lot was part of the original eight acres purchased for Michigan's first stake center in 1952. Although selling the piece was often under consideration, it never happened.

The location is a great blessing to many members, but none more so than those who have lived in eastern Michigan since the area was in the Salt Lake Temple District. One of those is Harold Rice of the North Shores Ward, Bloomfield Hills Stake, who will be an ordinance worker in the new temple. He listed the temple districts he has been in since Salt Lake and the travel time required to drive to each: Washington, 11 hours; Chicago, 5 hours; Toronto, 4 hours; Detroit, 45 minutes. "And I've lived in the same spot for 50 years," he said. "We're thoroughly enjoying having this temple."1