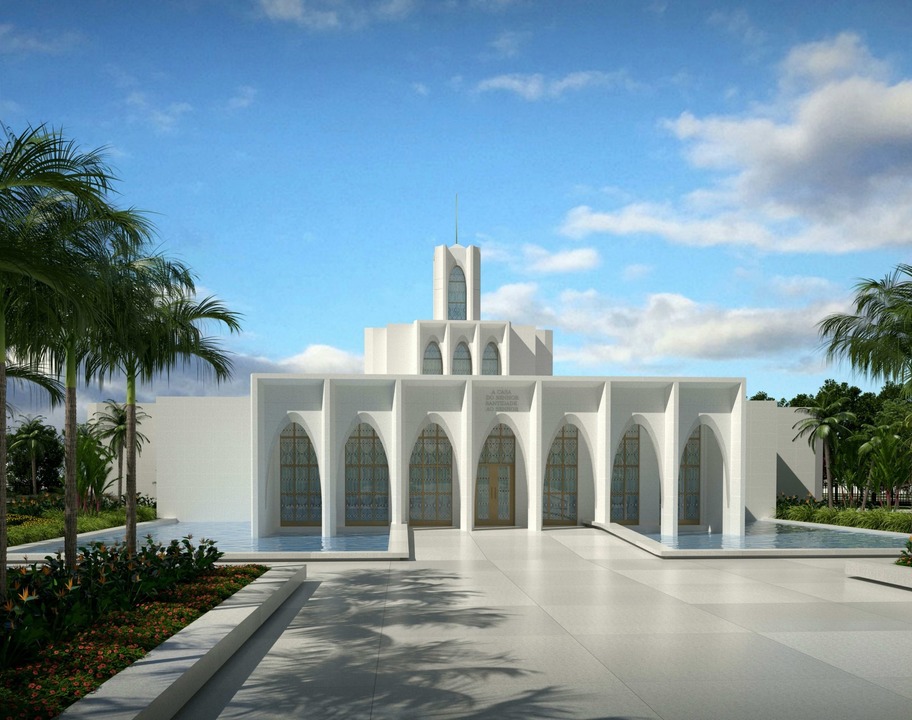 "Bless us so that we continue to strive to be good citizens who serve and bless our neighbors and to never forget the poor and needy," said Elder Adilson de Paula Parrella, president of the Brazil Area, in his site dedicatory prayer at the groundbreaking ceremony for the Brasília Brazil Temple held Saturday, September 26, 2020. Elder Parrella was accompanied by Elder Joaquin E. Costa and Elder Joni L. Koch of the Brazil Area presidency, along with Damares Alves, Minister of Women, Family and Human Rights in Brazil at the event. Due to social distancing guidelines, attendance was limited. The 25,000-square-foot temple will be located on a six-acre site near an arm of Paranoá Lake. Patron housing and a meetinghouse will also be constructed on site.1

On February 26, 2020, an official exterior rendering of the Brasília Brazil Temple was released to the public, featuring a single-level, 25,000-square-foot temple with numerous arches complementary to Brasília's famous architectural style. In addition to the temple, a patron housing facility and new meetinghouse will be constructed.

The site for the Brasília Brazil Temple is located in the northern section of the city near an arm of Paranoá Lake.

Brasília is Brazil's beautiful national capital, renowned for its unique architecture. More than 1.3 million members of the Church live in Brazil, more than any nation in the world other than the United States and Mexico. The Brasília Brazil Temple will bring the blessings of the temple closer to the thousands of members living in Brazil's vast interior. There are five stakes in the immediate Brasília area with five additional nearby stakes and more in the surrounding region.

The Brasília Brazil Temple will be the tenth temple built in the country of Brazil and the first built in the Federal District.