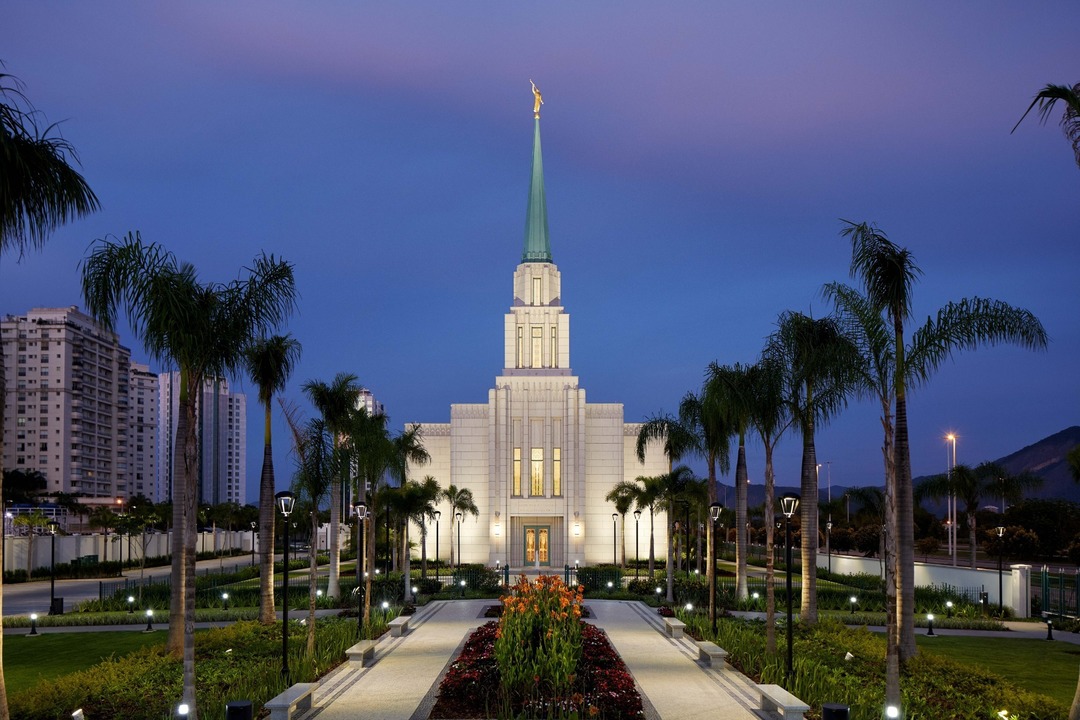 The Rio de Janeiro Brazil Temple is located next to a nature reserve on Avenida das Américas in the Barra da Tijuca neighborhood of Rio de Janeiro's West Zone. Barra is a beautifully modern development on the Atlantic Ocean that hosted most of the venues for the 2016 Summer Olympics. The temple stands across from a meetinghouse that was constructed at the same time. The two buildings are joined by a common plaza with a water feature, benches, and numerous trees and plants.

On Saturday, April 6, 2013, President Thomas S. Monson announced plans to construct the Rio de Janeiro Brazil Temple on the opening day of the April 2013 General Conference. A large concentration of Church members lived in the Rio de Janeiro region, but they traveled some 310 miles (500 km) to participate in temple work at the Campinas Brazil Temple.

Plans for the Rio de Janeiro Brazil Temple were submitted to the local government in late 2015, and various approvals were subsequently obtained. In November 2016, an environmental license was issued, which was required before construction could begin.

The groundbreaking ceremony for the Rio de Janeiro Brazil Temple was held on the same day as the groundbreaking ceremony for the Arequipa Peru Temple on March 4, 2017. Elder Claudio R. M. Costa, president of the Brazil Area, presided at the services. To prepare the site for groundbreaking, youth service projects were held to clear the land. "Today is a historic day for the Church in this city and in Brazil," said Elder Costa. "Rio de Janeiro is a wonderful city, a city that welcomes all with open arms like the Christ Statue."1

Invited guests and the general public were invited to tour the interior of the Rio de Janeiro Brazil Temple during a five-week open house held from Saturday, March 26, through Saturday, April 30, 2022. A media open house was held on Monday, March 21, followed by invited guest tours from Tuesday through Friday, March 22–25.

On the eve prior to the dedication of the Rio de Janeiro Brazil Temple, Elder Gary E. Stevenson of the Quorum of the Twelve Apostles met with the youth of the temple district to speak about the temple and other "fires of faith" that can help young people find their way on the path of life including scriptures, family, friends, leaders, the Children and Youth program, the For the Strength of Youth booklet, FSY conferences, priesthood quorums and classes, and the temple. He said, "Doing what you’re doing will prepare you for whatever the Lord has in store for you."2

Elder Gary E. Stevenson of the Quorum of the Twelve Apostles dedicated the Rio de Janeiro Brazil Temple in three dedicatory sessions held on Sunday, May 8, 2022. At the cornerstone ceremony, he said: "Christ is the cornerstone, and it is on this foundation that everything is built. Just as He is the center of each of us, Jesus Christ is the symbol of this beautiful city, the cornerstone of our lives and hearts." He prayed for Brazil in his dedicatory prayer saying, "May this country prosper in righteousness and eschew wickedness. Bless the members of the Church here to be a light unto this great nation, that their neighbors will see their good works and glorify Thee, our Father in Heaven. That Thy work may spread throughout this land."3

The Rio de Janeiro Temple is part of a larger Church complex that includes a full-size meetinghouse and shared parking. The buildings were designed to complement one another, with the temple being the premier structure. The temple was also designed to fit well with the surrounding architecture in Barra da Tijuca, with an Art Deco influence. Rio de Janeiro is considered the Art Deco Capital of South America.

It is fitting that the exterior of this temple’s concrete structure is covered with “Branco Ceará” granite quarried in northeastern Brazil. This is Brazil’s whitest and most uniform granite, and the same stone has also been used on several other temples, including the Recife, Campinas and Fortaleza Brazil temples and the Trujillo Peru temple.

The strong, simple, and symmetrical design of the exterior focuses on the entablature and window surroundings composed of carved stone representing the Art Deco arches motif. The beautiful single spire rises over 140 feet high and is topped by the gilded statue of the ancient prophet Moroni.

The site and landscape design derived from local horticulture and plants native to the region. In addition to shrubs, flowering perennials, vines and ground covers, there are 129 palms, 33 flowering trees, and 18 shade trees of numerous varieties and sizes. Architects selected trees and plants that would thrive in the local climate while meeting standards for maintenance and appearance. Interior walkways surrounding the temple and connecting to the adjacent chapel are built with stone pavers of Brazilian granite.

The fountain is constructed of Branco Ceará stone and white bronze nozzles. The fountain spray pattern recalls the fountain pattern found in the carved stone and the art glass patterns.

Design elements are finished with simple clean lines that evoke and reinforce a planar feel. The most notable among the contemporary design elements of the building are the Art Deco chandeliers and pendants, stylized railings in the baptistry and main stairwell, and expertly crafted millwork in carved column capitals and details around doors and windows. Decorative art painting is done in silver with cooler tone accents.

The window panels throughout the temple were designed jointly with GSBS Architects and Holdman Studios. The proximity of Rio de Janeiro to the ocean influenced the colors selected for the art glass, with shades of blue, aqua, and purple offset with soft gold. The patterns consist of geometric Art Deco Fountain motifs.

Brazil is known for its stone and the design team took great care to select finishes quarried in or available through Brazilian suppliers. The carpets come from Bentley Mills in California. The design in the blue carpet was influenced by the ocean, and carpet carvings in the celestial and sealing rooms was inspired by the fountain pattern found in the art glass windows.

Native Brazilian Jequitibá hardwoods are used throughout the temple. The designs are simple to reflect the clean modern style of the building and allow the natural beauty of the wood to shine. The recommend desk has metal details that were influenced by the Historic Bank of São Paulo building. The altars in the temple continue the Fountain motif from the windows and are painted wood with metal inlay.

The temple’s walls and corridors are adorned with familiar Latter-day Saint artwork along with original pieces with scriptural themes and native landscape scenes from Brazil.4

"To those who have received these blessings, I invite you to prepare yourselves to savor again the experience of being within the sacred premises of the holy temples of God and have the visions of life eternal open again to your hearts, minds, and souls."
—James E. Faust