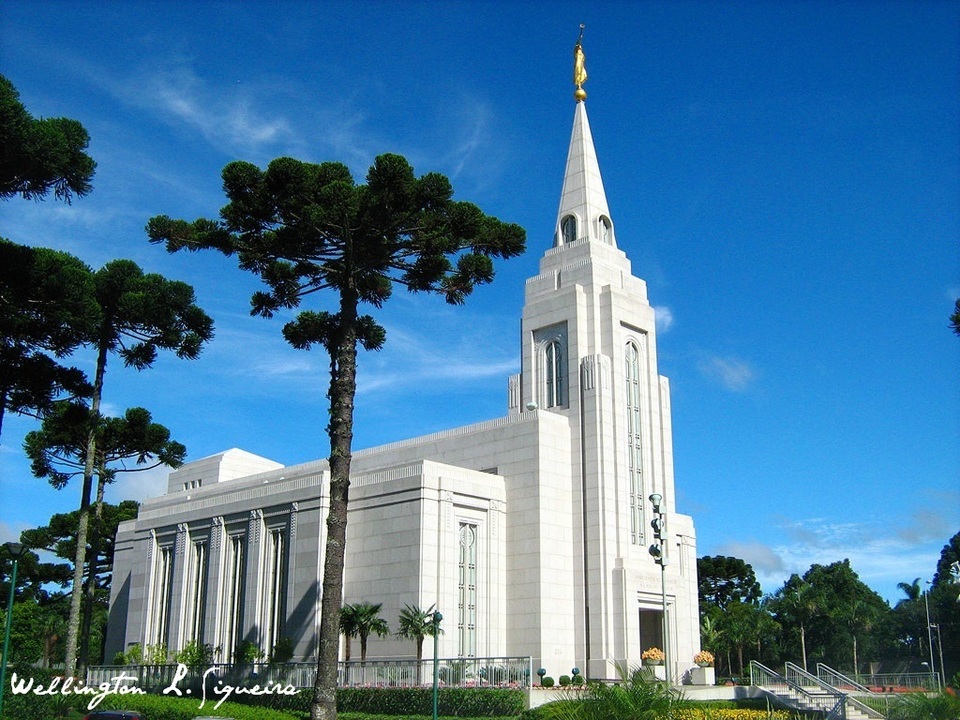 Surrounded by trees on a beautiful tract of land in the Campo Comprido district of western Curitiba, the Curitiba Brazil Temple is conveniently located next to the Unidade Saúde Campo Comprido bus stop near the Barigui Shopping Center. Decorating the exquisite grounds are a large water feature, gorgeous gardens, and numerous trees. The public is welcome to walk the grounds.

The Curitiba Brazil Temple was the fifth temple built in Brazil.

The first Brazilian stake outside of São Paulo was created in Curitiba in 1971.

The gold-leafed angel Moroni statue was installed atop the spire of the Curitiba Brazil Temple on January 11, 2008.

Over 42,000 visitors took the opportunity to tour the Curitiba Brazil Temple during its two-week public open house.

President James E. Faust served as a young missionary in Curitiba and later presided over South America as a general authority. President Gordon B. Hinckley planned to take Pres. Faust with him to dedicate the Curitiba Brazil Temple, but both passed away in the months preceding the dedication.

President Thomas S. Monson's trip to dedicate the Curitiba Brazil Temple was his first trip outside North America as president of the Church.

In 1953, at the dedication of the Ipomeia meetinghouse, President Spencer W. Kimball declared: "One day, in this region, there will be a temple of the Lord." Over 50 years later, fulfillment of that prophecy began when President Gordon B. Hinckley personally selected the site for the Curitiba Brazil Temple in 2004 during his travels to rededicate the São Paulo Brazil Temple.1

On February 16, 2005, Church authorities met with City officials including Mayor Beto Richa to announce the pending construction of the temple. They explained the significance of the temple for members in the entire region. In addition, they presented two Church programs: Helping Hands and the Perpetual Education Fund. The mayor expressed sincere enthusiasm for the service provided through Helping Hands, wishing that more organizations demonstrated the same zeal for volunteer service as does the Church. When presented with a statue which represents family ties, Mayor Richa said he would place it in his home as a reminder of his own family.2

To an audience of about 1,200, Elder Russell M. Nelson of the Quorum of the Twelve Apostles presided at the groundbreaking ceremony for the temple on Thursday, March 10, 2005. Also participating in the ceremonial dig was Vice-Mayor Luciano Ducci, who represented Mayor Beto Richa. In his remarks, Vice-Mayor Ducci referred to the groundbreaking as a beautiful gift for Curitiba, which celebrated its anniversary just 19 days later on March 29.3

The temple opened to the public for a two-week open house and was the occasion of numerous spiritual experiences. One account tells of a visitor who became increasingly anxious during his tour, almost running from the final room. Tour guides couldn't imagine the cause of his anxiety, but he came again the next day and explained, "I felt something in my heart that I had never felt before [that] filled me with happiness. I wanted my family to feel what I was feeling." He continued, "That's why I ran; I was in a hurry to tell my wife about this, and ask her to come back with me." He was accompanied this time by not only his wife but also his four children and his grandchildren. The missionaries identified his feelings as the Spirit and arranged to teach him. Of the over 40,000 who visited the temple, approximately 4,000 left comment cards and 2,000 requested missionaries.4

In an truly impressive display—compared to the opening ceremony of the Olympics by President Thomas S. Monson—4,330 Brazilian Saints took to the field of Curitiba's Arena da Baixada, backed by 1,700 voices, to present a cultural celebration the evening before the temple dedication. The program mixed music, dance, drama, gymnastics, scripting, costuming, direction, staging, and technology to tell the story of the Church from its founding in New York to the dedication of its 126th temple in Curitiba. When photographs of President James E. Faust and Elder Wm. Grant Bangerter were displayed during the program, the audience erupted in a tremendous cheer. The touching story of their discouragement and heart-felt prayers during their missionary service was related, which resulted in them feeling inspired that their work would bear fruit. Indeed it has!5

President Thomas S. Monson presided over the "long-awaited day" of dedication, beginning with the sealing of the cornerstone and ending with members lingering on the temple grounds, not wanting the day to end. Members traveled great distances to be in the presence of their prophet, filling the temple to capacity while services were transmitted to area stake centers. Julia Domingues Costa of the São José dos Pinhais Stake was among those infused with the spirit of the day. "These are tears of joy," she explained, shortly after an opportunity to shake Pres. Monson's hand. "I was so happy to be able to attend the dedication. It is really the House of the Lord. President Monson is a man of the Lord. He's our prophet, and I'm sure if we do our share in this house we will all be together with the Lord someday as brothers and sisters."6