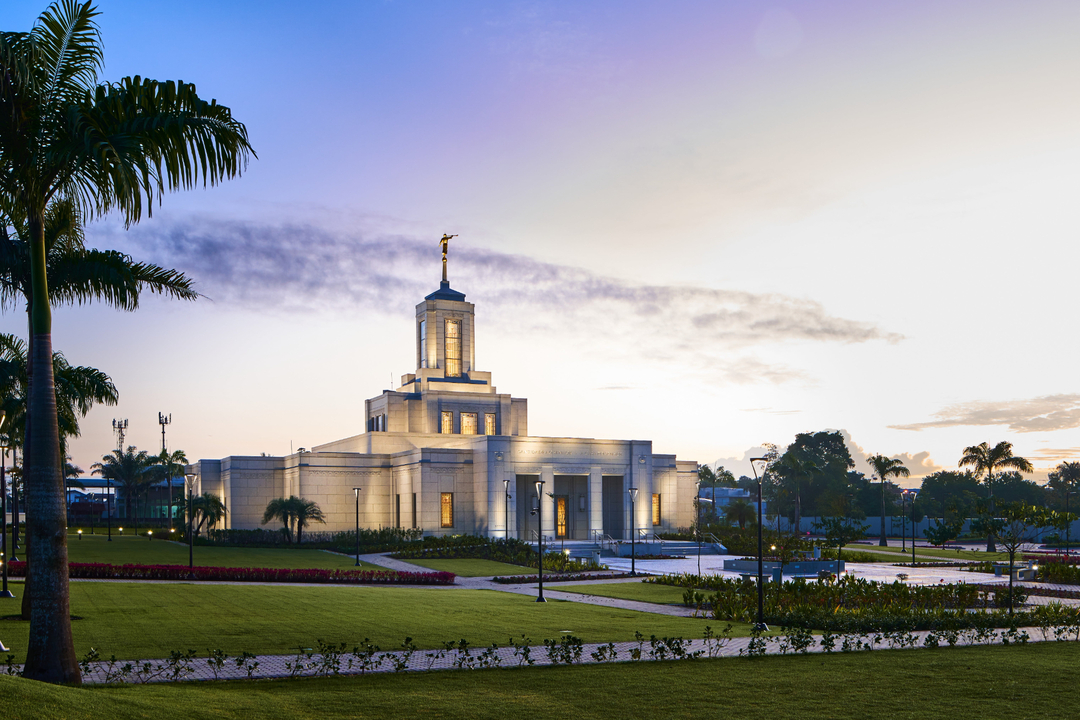 Anchoring a metropolitan area of over two million people, Belém is one of the most populous cities in Brazil. Known as the gateway to the Amazon River, the city stands on the banks of the Pará River, approximately 60 miles upriver from the Atlantic Ocean in northern Brazil. The Belém Brazil Temple is a beautiful landmark on Avenida Centenário, a major thoroughfare near the Val de Cans International Airport. A housing facility shares the extensively landscaped temple site that provides a large amount of green space for quiet strolls and peaceful contemplation.

The Belém Brazil Temple was the ninth temple built in Brazil.

The Belém Brazil Temple was announced in the 400th anniversary year of the founding of the city of Belém.

On April 3, 2016, President Thomas S. Monson stood at the Conference Center pulpit for his opening remarks at the Sunday morning session of General Conference. "Brothers and Sisters," he began, "before I begin my formal message today, I would like to announce four new temples, which in coming months and years will be built in the following locations." After naming the Quito Ecuador Temple and Harare Zimbabwe Temple, the Saints of Brazil rejoiced to hear the announcement of Belém, Brazil.1

In the years prior to the announcement, Church membership had grown appreciably in the city where there were five operating stakes with a total of seven stakes and two districts in the state of Pará. The Saints had previously belonged to the Recife Brazil Temple, which was serving over 80 stakes and districts throughout northeastern Brazil. Travel from Belém to Recife required a two-and-a-half hour flight or a grueling 1,200-mile journey by vehicle.

On August 2, 2019, an official rendering of the Belém Brazil Temple was published in a news release announcing the groundbreaking ceremony.

"May this work be a symbol of light and a representation of the love of Jesus Christ to all," said President Marcos A. Aidukaitis, president of the Brazil Area, in his site dedicatory prayer at the groundbreaking ceremony for the Belém Brazil Temple held on Saturday, August 17, 2019. Hundreds of Church members and guests gathered to the site to participate in the historic services including Church, civil, religious, and community leaders. For years, faithful members have looked forward to the day when a temple would be built in their midst, having previously participated in temple ordinances in the distant cities of São Paulo, Campinas, Recife, and most recently Manaus.2

The Belém Brazil Temple opened for public tours from Saturday, October 22, through Saturday, November 5, 2022. No tours were offered on Sundays. Elder Dale G. Renlund of the Quorum of the Twelve Apostles presided at the dedication of temple held in three sessions on Sunday, November 20, 2022.3

This single-story temple is clad in Brazilian granite, a feature in common with many other houses of the Lord in Brazil. Its soft, white appearance is a striking contrast to the beautiful green surroundings. The stylized motif found in the stone combines geometric elements inspired by local Marajoara indigenous pottery with the Victoria amazonica, a native water lily known for its beauty.

This water lily is also featured prominently in the art glass design. And the blue, green, yellow and pink color palette is a nod to the rainforest that covers much of the region. Brazilian landscape experts were consulted to identify which native species would best fit the design.

The center spire draws from local styles in historic downtown Belém. At 89 feet tall, the spire soars above the freeway that passes alongside the temple site.

The flooring features a national porcelain tile with a travertine stone border, a Brazilian brown stone accent, Arezzo, and a Crema Marfil Spanish stone base. The floor’s geometric design patterns link it with the wood motif.

A local craftsman shaped carpet carvings in the celestial and sealing rooms, and the entry rugs’ colors and patterns follow the design of the art glass.

A medium brown native wood is used throughout the temple millwork and uses the same motif displayed on the exterior stone.

Constructing structural walls for the temple and meetinghouse; roofing the housing buildings