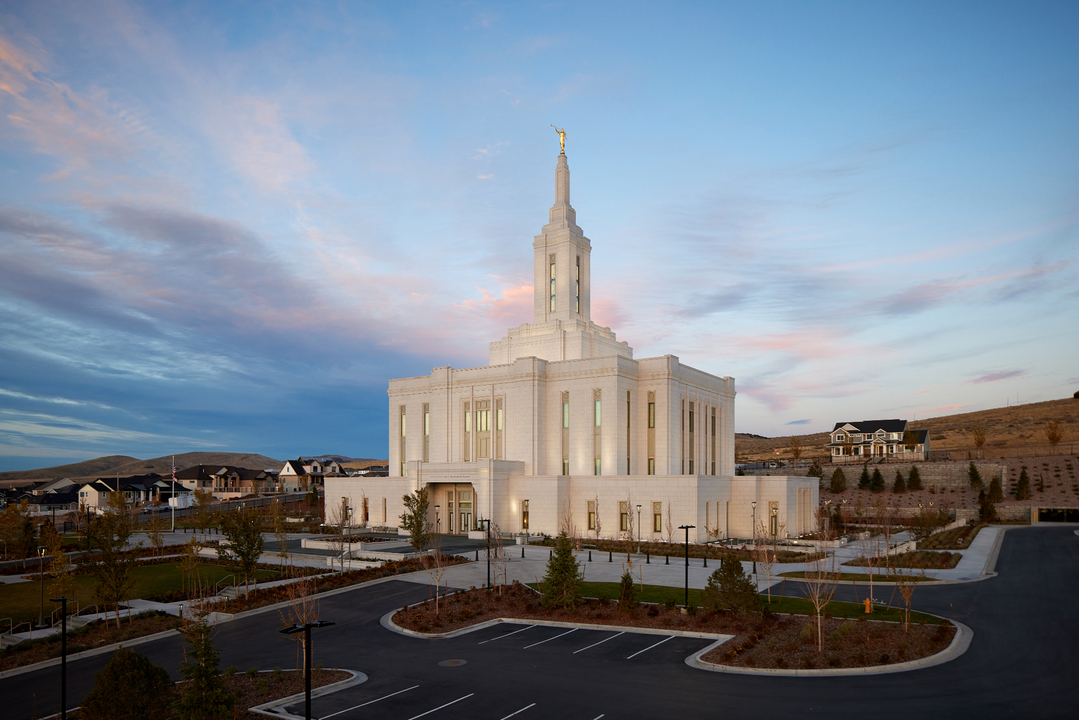 In an answer to many prayers, sunshine and beautiful blue skies accompanied the Pocatello Idaho Temple groundbreaking ceremony on Saturday, March 16, 2019, despite weeks of gray clouds and heavy snowfall. The opening prayer was offered by hometown hero, Taysom Hill, who is a quarterback for the New Orleans Saints but put on his jersey for the Latter-day Saints on this occasion. Elder Wilford W. Andersen of the Seventy presided at the ceremony and offered the dedicatory prayer. Church and community leaders, local developers, and numerous interfaith leaders were the first to turn the ceremonial shovelfuls of dirt.

On Tuesday, March 5, 2019, over 2,500 eager Pocatello-area youth descended on the temple site with shovels in hand to clear the ground of vegetation in preparation for the groundbreaking ceremony. With so many helpers, all of the weeds and sagebrush were pulled from the 12-acre site in less than 30 minutes.

On March 1, 2019, renderings of the Pocatello Idaho Temple and site plan were on display at a neighbor open house held at the stake center west of the temple site. The previous evening, representatives from Church headquarters held a briefing with local Church leaders and conducted interviews with the media.

On April 6, 2017, four days after the announcement of the temple, the property for the temple was annexed into the City of Pocatello as part of a larger land annexation.

On November 15, 2017, application for the subdivision where the temple would rise, known as Crestview Estates Division 2, was considered at a Planning and Zoning Commission meeting. Applicants included the Church, the developer, and the engineering firm. The nearly 29-acre subdivision was presented including the 11-acre temple site and 31 surrounding residential lots. A proposal to rename Ray Street to Monson Street was also included in the application. The change would mean that the streets bordering the temple site would be named Monson Street, Legacy Drive, Clearwater Street, and Andrew Street. The Commission unanimously recommended approval of the subdivision to the City Council.

On February 1, 2018, the City Council approved both the subdivision and the street name change. Construction of the subdivision infrastructure began the following month and concluded in the fall of 2018.

On October 11, 2018, a Church representative presented two variance requests at a Hearing Examiner meeting to allow construction of the temple. The first request was a variance from the height restrictions, and the second variance was a variance from the lighting standards. The Hearing Examiner approved both the height variance and the lighting variance with the condition that the nighttime floodlighting be turned off by 10 p.m. each night.

On January 30, 2019, plans were submitted for review to the City of Pocatello Building Department, and application was made for a building permit. Final approval was granted on February 12, 2019.

On September 7, 2018, the official rendering of the Pocatello Idaho Temple was released to the public, revealing a white three-story building with a multi-tiered central spire.

On June 22, 2017, state approval was granted for construction of a new I-15 interchange to be built north of the city, which will provide better access to the temple. Construction of the Northgate interchange began November 5, 2018 and opened on December 6, 2019. Construction of a master-planned development east of the interchange has begun. The Northgate District will be built on 20,000 acres and feature new neighborhoods, parks, trails, shopping centers, entertainment venues, and a major technology park employing 6,000 people.2

At the time of the announcement, there were approximately 450,000 members of the Church in Idaho—more than a fourth of the state's population of 1.7 million people—organized into 129 stakes. There were 11 stakes in the Pocatello-Chubbuck metro area with another 10 stakes located in the surrounding communities of American Falls, Arimo, Blackfoot, Grace, McCammon, and Soda Springs.

In 1930, when President Heber J. Grant announced that the next temple of The Church of Jesus Christ of Latter-day Saints would be constructed in Idaho, leaders from various stakes throughout the state urged that their respective communities be considered for the honor. Ezra Taft Benson, who was a counselor in the Boise Stake presidency, presented a particularly stirring argument for the state capital to be considered.4 In time, however, a hillside site was seriously investigated in the booming railroad town of Pocatello. The community's surrounding mountains made a beautiful setting for a temple in a city with excellent interstate transportation and a growing population—the second highest in the state. However, a depression-era economy had left the local government so poor, it would not pay to extend water and utilities to the west-bench location.5 In the meantime, the Chamber of Commerce in Idaho Falls, located 50 miles north of Pocatello, donated a prime parcel of land on the banks of the Snake River, bordering an LDS hospital. And that became the site of Idaho's first temple.

As the years passed, Pocatello experienced a series of economic setbacks, producing a local joke among members that the city was "cursed" for passing on the temple. Nevertheless, the hope never died for a House of the Lord to be constructed there. Decades after Idaho's first temple was constructed, a second temple was announced in 1982 for the state capital, the Boise Idaho Temple. In 1998, land on Pocatello's east bench was secured by the Church for the anticipated purpose of building a temple. However, it was the Rexburg Idaho Temple that was announced in 2003, two years after the announcement that Ricks College would become Brigham Young University–Idaho. And months later, the Twin Falls Idaho Temple was announced to serve members in the South Central region of the state. Pocatello Saints patiently waited through the perennial speculations and rumors. In 2011, the Meridian Idaho Temple was announced as the fifth for the state to serve the rapidly growing Boise metro area. Other communities near Pocatello also received temples including the Brigham City Utah Temple and the Star Valley Wyoming Temple. The Saints of Pocatello rejoiced in each new temple, grateful that faithful Saints would be spared difficult travel.

In 2017, Pocatello's long-awaited dream took one step closer to reality. The city had been placed on a long list of potential temple locations produced by the Temple Department that was presented to the prophet, President Thomas S. Monson. When Pocatello was mentioned, he stopped the presenters and said: "Pocatello will get a temple. The Saints there are well prepared, and it's time for them to have a temple."6 On April 2, 2017, President Monson himself made the announcement during the Sunday Morning Session of General Conference. Shouts of joy rang in living rooms throughout the valley, and tears of gratitude were shed. Pocatello would receive its temple.

During the five-week public open house of the Pocatello Idaho Temple, the number of guests who toured the interior of the building totaled 250,721.