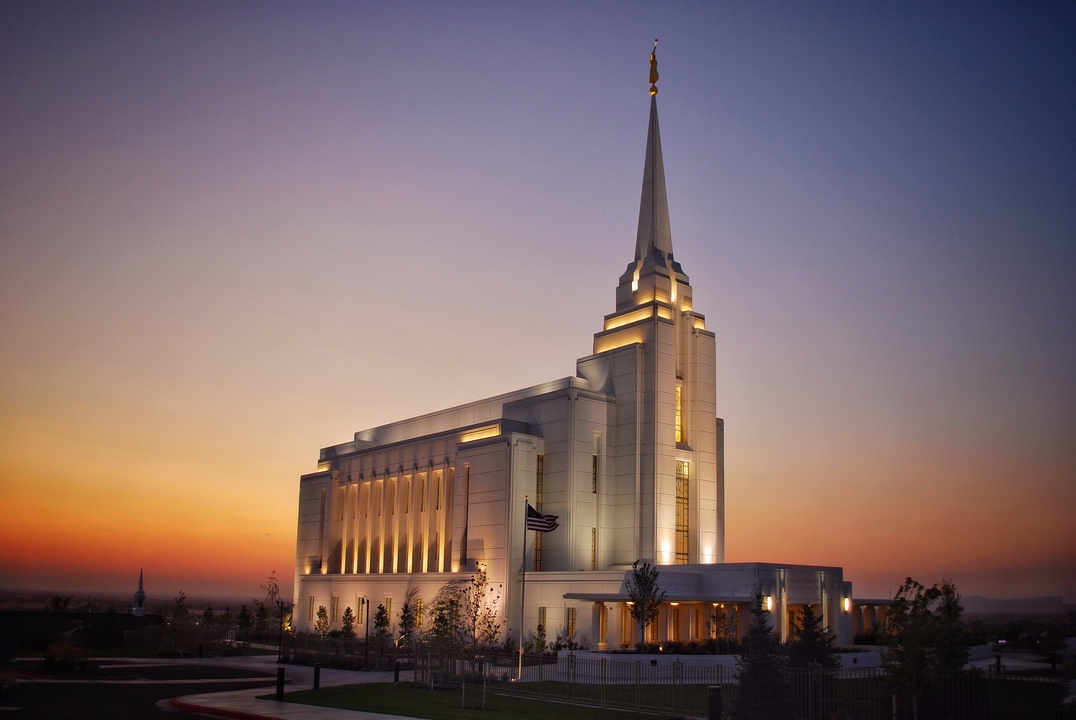 Adjacent to the Brigham Young University–Idaho campus, the five-story Rexburg Idaho Temple soars high above its hillside location—creating a striking landmark visible for miles along the Highway 20 corridor. It is the finest, most notable building in this rural community. West of the temple lies a beautiful garden area open to the public for quiet strolls or moments of reflection.

The announcement of the Rexburg Idaho Temple came three and a half years after the announcement that two-year Ricks College would become four-year Brigham Young University–Idaho.

While most temple groundbreakings are limited to invited guests, the groundbreaking ceremony for the Rexburg Idaho Temple was open to any and all who desired to attend. Over 8,000 people crowded on the field where the temple now stands.

A wheat motif, created by Utah artist Tom Holdman, is used throughout the Rexburg Idaho Temple including most of the 700 art-glass windowpanes. The wheat stalk symbolizes the widespread agricultural industry in the area.

The finest materials were used for this House of the Lord including wood imported from Africa and stone and tile from Israel.

The exterior walls of the Rexburg Idaho Temple are made of 637 precast panels from 45 different molds, including the retaining wall. The material is called China White—a white quartz finish (mined in Washington state) on concrete panels. A water-proofing compound allows dust to wash off in the rain, keeping the temple a radiant white.

Interest in the open house of the Rexburg Idaho Temple was so high that additional early-morning and evening tours were added to each day. Over 200,000 visitors toured the temple.

The Rexburg Idaho Temple dedication was delayed one week due to the passing of President Gordon B. Hinckley on Sunday evening, January 27, 2008.

President Thomas S. Monson was installed as the 16th president of The Church of Jesus Christ of Latter-day Saints on Sunday, February 3, 2008—the day originally scheduled for the dedication of the Rexburg Idaho Temple. He dedicated the temple one week later.

Latter-day Saints first began to settle the Upper Snake River Valley in 1879, following the completion of the Utah Northern Railroad. By 1883, under the direction of Thomas E. Ricks, the city of Rexburg was established, and just a year after that, Idaho's second stake—the Bannock Stake—was organized with headquarters in Rexburg. As was tradition at the time, a stake academy was also founded in 1888: the Bannock Stake Academy. And by 1923, the school had matured into a junior college, named Ricks College after Rexburg's founder.1

In June 2000, Rexburg received a major announcement from the Church that two-year Ricks College would become four-year Brigham Young University–Idaho by fall 2001. New construction gripped the quiet farming community as housing complexes seemed to appear overnight. By the end of 2003, the First Presidency made a second major announcement: Idaho's third temple would be built in Rexburg. Rexburg became Idaho's fastest growing city as its 17,500 residents in 2000 multiplied to 28,000 by the time the temple was dedicated in 2008.2

On Tuesday, June 28, 2005, Architectural Nexus applied for its building permit to begin preparation work for the temple site. Included in the application materials were building and site plans. The plans revealed a five-story, 57,504 square-foot building. The single steeple, set on the east side of the east-facing building, would rise 168 feet, topped by a gold-leafed statue of Moroni. A garden plaza would separate the temple from an adjacent stake center to the west, leaving only the temple and its landscaping visible from 7th South.3

Elder John H. Groberg of the Seventy, newly called as president of the Idaho Falls Idaho Temple, presided at the Saturday groundbreaking for the temple where over 8,000 people were in attendance. Attendance was open to any who wished to attend including members of other faiths. Elder Ronald J. Hammond, an Area Authority of the Seventy from Rexburg, noted, "As the ground opens and as the shovel breaks it and turns it, your spiritual senses will know immediately that something very, very significant is happening—something that at once disturbs the devil and blesses God's children on both sides of the veil."4

On September 21, 2006—the 183rd anniversary of the first appearance of the angel Moroni to Joseph Smith—a gold-leafed statue of the angel Moroni was installed atop the spire of the temple. Thousands of spectators gathered under rain clouds, making for a memorable Moroni raising. At the conclusion, cheers erupted from the enthusiastic onlookers.5

Reservations for the open house were snatched up in the first week after they became available, giving committee planners its first indication that its original estimate of 150,000 visitors was too low. Tour group sizes were regularly increased and tour times added to accommodate the overwhelming demand. Once tours concluded, over 200,000 visitors had viewed the interior of the edifice. To keep the open house running efficiently, over 10,000 volunteers willingly gave their time and talents including handing out over 10,000 cookies a day and 60,000 gallons of punch. Other responsibilities included leading tours, ushering, directing traffic, and putting foot coverings over visitors' shoes. Volunteers of all ages participated including a large number of eager BYU–Idaho students.6

The evening preceding the dedication of the temple, some 2,000 youth from the temple district's 17 stakes gathered in the Hart Auditorium on the BYU–Idaho campus to celebrate the area's heritage in a vibrant display of costume, music, dance, and multimedia. The celebration was broadcast to stake centers and other buildings on campus to accommodate the great number in attendance. Narration highlighted significant events from Upper Snake River Valley history including pioneer struggles, the founding of Ricks Academy, and the role of agriculture. The level and diversity of talent was outstanding.7

On the evening of January 27, 2008, one week before the scheduled dedication of the temple, news traveled across the globe of the passing of President Gordon B. Hinckley, who had intended to dedicate the temple. To accommodate Pres. Hinckley's funeral, the dedication ceremony was postponed one week. On the day of the originally scheduled dedication, President Thomas S. Monson was ordained the 16th president of the Church and assumed the task of dedicating the temple the next week as his "first official act" as president. Dense fog the morning of the dedication prevented his plane from landing in Idaho Falls as scheduled, so the plane was rerouted to Pocatello, and the final 80 miles of the trip was resumed by car. President Henry B. Eyring of the First Presidency and Elder David Bednar of the Twelve, both former presidents of Ricks College, planned to attend the dedication, but Pres. Eyring was prevented due to a broken ankle. The four dedicatory sessions were broadcast throughout the region to the thousands of members wishing to attend. In his dedicatory prayer, Pres. Monson declared, "May Thy faithful saints of this and future generations look to this temple as a sanctuary and a place of service to Thee and to Thy children."8