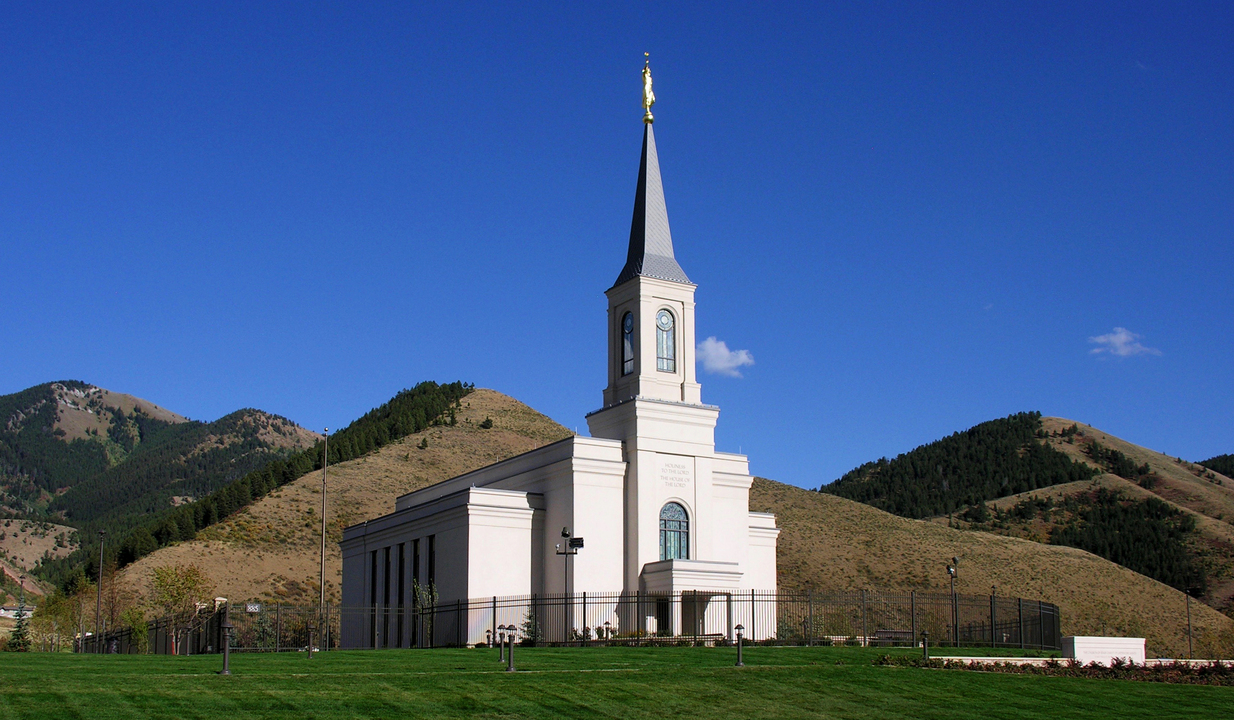 One ordinance room (stationary) and one sealing

The Star Valley Wyoming temple stands on a gentle rise overlooking Highway 89, just south of the community of Afton near the mouth of Hale Canyon. The classical design of the temple echoes architectural elements found in the historic Star Valley Tabernacle, located just a mile north of the temple. The buildings represent the spiritual heart and center of The Church of Jesus Christ of Latter-day Saints community in Star Valley.

The Star Valley Wyoming Temple was the first temple built in Wyoming.

When problems were encountered with the originally proposed location for the Star Valley Wyoming Temple at the base of Hale Canyon, the location was shifted west next to the highway. The contractor found the ground conditions at the new location to be ideal for the foundation, eliminating the usual need for extensive fill and compaction work.

Thousands of Church members and friends participated in the groundbreaking ceremony for the Star Valley Wyoming Temple on April 25, 2015. Many more joined by satellite and Internet transmissions. Elder Craig C. Christensen of the Presidency of the Seventy presided. Construction began the following Monday, April 27, 2015.

The placement of the angel Moroni atop the Star Valley Wyoming Temple took place April 25, 2016, exactly one year after the groundbreaking ceremony. The event was announced beforehand, allowing hundreds of spectators to gather and witness the raising.

Behind the recommend desk of the Star Valley Wyoming Temple is a stunning stained-glass depiction of Jesus Christ, which is refurbished piece originally created for a Presbyterian Church in New York City.

On May 8, 2012, the Afton Town Council unanimously approved a variance to permit the spire of the Star Valley Wyoming Temple to exceed zoning height restrictions. Temple renderings shown to the Council as possible representations included The Gila Valley Arizona Temple, Fort Lauderdale Florida Temple, Sacramento California Temple, and Calgary Alberta Temple. The exact design and orientation of the building would be determined in consultation with 15 surrounding land owners.1

On December 11, 2012, the Afton Planning & Zoning Board Chairman informed the Town Council that representatives from the design firm for the Star Valley Wyoming Temple contacted him to inquire about additional rules and regulations pertaining to roads, water, and sewer. It was determined that the Town Attorney would review the matter and respond to the firm.

At the Afton Town Council meeting in February 2013, it was stated that a meeting had recently been held with Church representatives regarding the infrastructure for the temple site. No additional information was available.

On March 10, 2015, plans for the Star Valley Wyoming Temple were presented to the Afton Town Council, and approval was granted for a 30-month building permit. Construction is anticipated to begin on Monday, April 27—two days after the groundbreaking ceremony—with construction expecting to last two years. "We are very grateful to the city and community for their support of the Star Valley Temple of The Church of Jesus Christ of Latter-day Saints," said President McKell Allred, chairman of the Star Valley Temple Groundbreaking Committee. "Tonight was another important step in the process as we look forward to the official temple groundbreaking on April 25."2

On May 25, 2012, the Church officially announced the location of the Star Valley Wyoming Temple as east of U.S. Highway 89 on the Haderlie Farm property in the town of Afton, south of Star Valley Medical Center and north of the Star Valley View Golf Course. The mayor of Afton, Loni Hillyard, said that members are "elated at the prospects of a temple in our valley." She feels certain the temple "will have a positive effect on [the] entire community." Local Church spokesman Jerry Hansen said, "We truly believe this new temple will be a great asset not only to members of the Church but also to the people of the surrounding community, who will benefit from the peace and beauty a temple brings."3

On April 30, 2012, Star Valley Independent reported that a letter from the Presiding Bishop to Mayor Hillyard had earlier confirmed the location of the temple. The letter proposed development of a portion of the site to construct a temple and requested a variance to the building height restriction of the zoning ordinance to accommodate a spire. "The actual temple is not too tall, it will just be the steeple," Mayor Hillyard said. "Our flight path maximum is 45 feet so they are going through this variance process. I do not anticipate a problem. It is so far up the hill away from the airport I don't think it will be an issue."4

The Star Valley Wyoming Temple was prophesied by Elder Moses Thatcher of the Quorum of the Twelve. Thatcher first came to the valley in the late 1870s, looking for a suitable location where colonizing Latter-day Saints could settle. Looking over the beautiful valley, he declared, "I hereby name this valley Star Valley because it is the star of all valleys." He later returned with Elder Charles C. Rich, a senior apostle, to dedicate the valley for the settlement of the Saints.

On July 3, 1894, Church officer George Goddard gave a report on his travels to Star Valley, as recorded in the Deseret Weekly. He referenced a prophesy given by Elder Moses Thatcher in his description of the temple bench: "A fine tract of bench land on the eastern portion of Afton will afford a beautiful site for a Temple hereafter to be built, as per prophesy of Elder Moses Thatcher. This bench lies at the mouth of Swift Creek canyon, from whence flows a large stream of pure water, flanked on either side by a park of beautiful swamp pines, many of which are more than 100 feet high."

During his opening remarks at the Saturday morning session of the October 2011 General Conference, President Thomas S. Monson announced plans for the first temple in Wyoming, to be constructed in historic Star Valley.5 The announcement drew an audible reaction from the Conference Center congregation who marveled at the news. "I think I'll dedicate that one," quipped the prophet. "There's good fishing up there!"

Grateful cheers and tears instantly filled the valley. "We were just as surprised as anyone," said President Mark Taylor of the Afton Wyoming Stake. "There have been a lot of well-wishers and residents who have already stepped forward and offered land and other donations to get the ball rolling." President Michael Allred of the Thayne Wyoming Stake commented, "I think it is important to note that this temple will not just be for members of our faith. This is for all residents of Star Valley and it will be a blessing to this area."6

The Church has a long history in Star Valley with the first Latter-day Saints of record arriving from England in 1858 to labor on the Lander Cutoff. By 1870, Church cattle were pastured in the valley, and in 1879, a directive was issued to colonize the Salt River Valley—renamed Star Valley the next year. Members were first organized into a branch of the Bear Lake Stake. In 1892, the Star Valley Stake was organized with 7 wards. The 140-foot Star Valley Tabernacle, which still stands in Afton, was dedicated on August 15, 1909, by President Joseph F. Smith. There are now two stakes of the Church in Star Valley: the Afton Wyoming Stake and the Thayne Wyoming Stake. These stakes currently belong to the Idaho Falls Idaho Temple District.

On August 14–15, 2009, the centennial celebration of the dedication of the Star Valley Tabernacle was held, beginning with 100 rings of a pioneer church bell and the shot of a cannon. A 70-voice Star Valley Tabernacle Choir initiated the celebration with a concert featuring special guest Tom Osmond, whose great-grandfather, George Osmond, Jr., was the first president of the original Star Valley Stake. An organ solo was also performed on a pipe organ acquired from the Idaho Falls Idaho Temple in 1987. Saturday began with a 10-mile bike-a-thon from the tabernacle stone quarry to the tabernacle. Other activities included a ceremonial flag-raising, patriotic concert by a Centennial Brass Band, and numerous indoor and outdoor festivities. A display in the tabernacle featured historic photographs, tools used in construction, and a video of historical and modern views of the tabernacle. The celebration ended with the unveiling of artifacts from a time capsule that had recently been discovered in the tower cornerstone.7

"As we come unto Christ and journey to higher ground, we will desire to spend more time in His temples, because the temples represent higher ground, sacred ground."
—Joseph B. Wirthlin