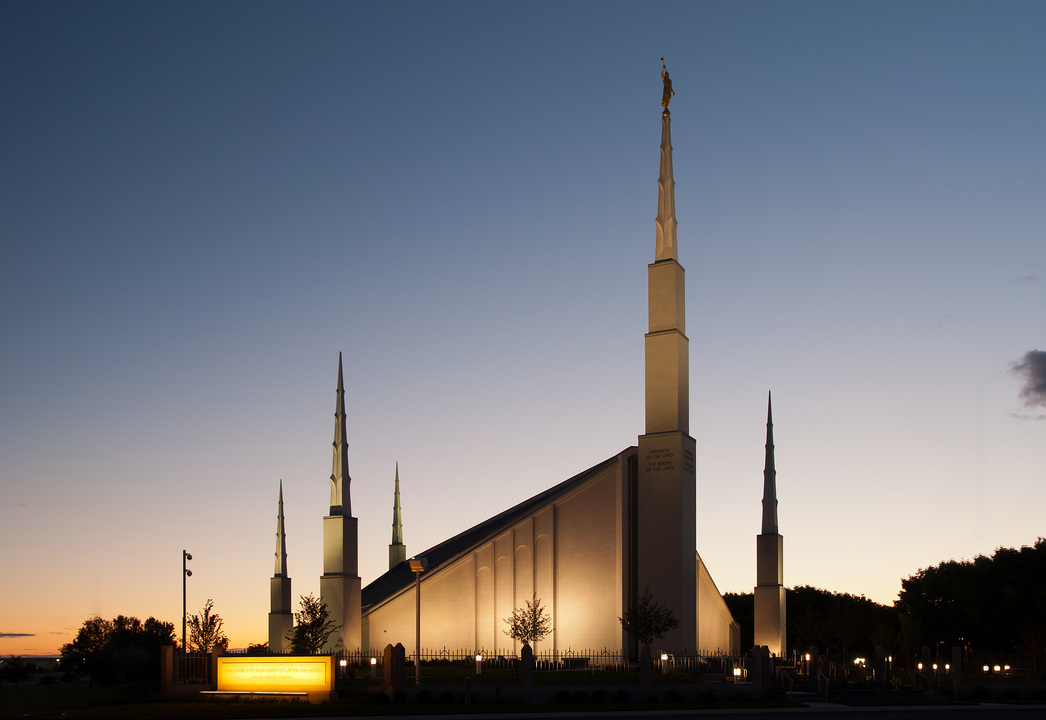 For travelers on Interstate 84, the Boise Idaho Temple is a landmark that cannot be missed. Positioned at the I-84 Cole Road Exit, the temple is characterized by its light granite exterior, large sloping roof, and six soaring spires. Adjacent to the north is a meetinghouse. The grounds of the temple are enhanced with a beautiful water feature and numerous mature trees.

The Boise Idaho Temple was the first six-spire temple built since the Washington D.C. Temple (1974) and the Salt Lake Temple (1893). The design, created to maximize efficiency, was adapted for 14 other temples built between 1984 and 1989.

The Boise Idaho Temple is a sister building to the Dallas Texas Temple and the Chicago Illinois Temple.

In 1939, President Heber J. Grant was invited to Idaho's capital where 15 prominent local businessmen offered to the Church any available site in Boise to build Idaho's first temple, but Idaho Falls was chosen due to the concentration of membership in Eastern Idaho. President Grant told the men that when membership increased in the Boise area, a temple would be built there.

On December 18, 1982, approximately 5,000 members huddled on the site of the Boise Idaho Temple to witness the groundbreaking ceremony where Elder Mark E. Petersen of the Quorum of the Twelve Apostles presided.

During a special preview, numerous state officials including Idaho Governor John Evans, Lieutenant Governor David Leroy, and Secretary of State Pete Cenarusa toured the interior of the Boise Idaho Temple. Also part of the group were 246 ministers of other faiths and their family members.

About 70,000 visitors were expected to tour the Boise Idaho Temple during its 19-day open house, but expectations were exceed when 128,716 people toured the building. The usual number of convert baptisms more than doubled the month following the open house; people even called the mission office asking how to get baptized.

The Boise Idaho Temple was dedicated in 24 sessions—more dedicatory sessions than had been held for any temple since the Salt Lake Temple.

The Boise Idaho Temple operated at 102 percent of capacity during its first year of operation—a demonstration of the remarkable dedication of the Saints of the temple district.

Due to its high level of use, the Boise Idaho Temple was closed for renovation and expansion just two-and-a-half years after its dedication. The temple reopened in May 1987 with additional dressing rooms and office space and a new baptistry and cafeteria.

On July 11, 2011, the Boise Idaho Temple closed for an extensive 15-month renovation that included a new baptistry entrance, removal of the cafeteria and clothing rental, expansion of the basement, new walls and trim work, raised ceilings, new finishes and furnishings, updated mechanical systems, and structural reinforcement. The landscaping featured new sidewalks (that now connect to the public sidewalks), stairways, benches, planters, and retaining walls; new plants, shrubs, and flowers; a beautiful reflecting pool encased in stone; and a new exterior lighting system. The pearl gray marble tile on the exterior was replaced with temple white granite because the adhesive used to attach the original tile began to seep through and change the appearance of the walls.

On February 16, 2012, a new gold-leafed angel Moroni was placed atop the eastern spire of the Boise Idaho Temple as part of an extensive renovation project. The cornerstone, which had been on the interior of the building since a 1987 expansion project, was quietly relocated to the northeast corner on the exterior of the temple on August 29, 2012.