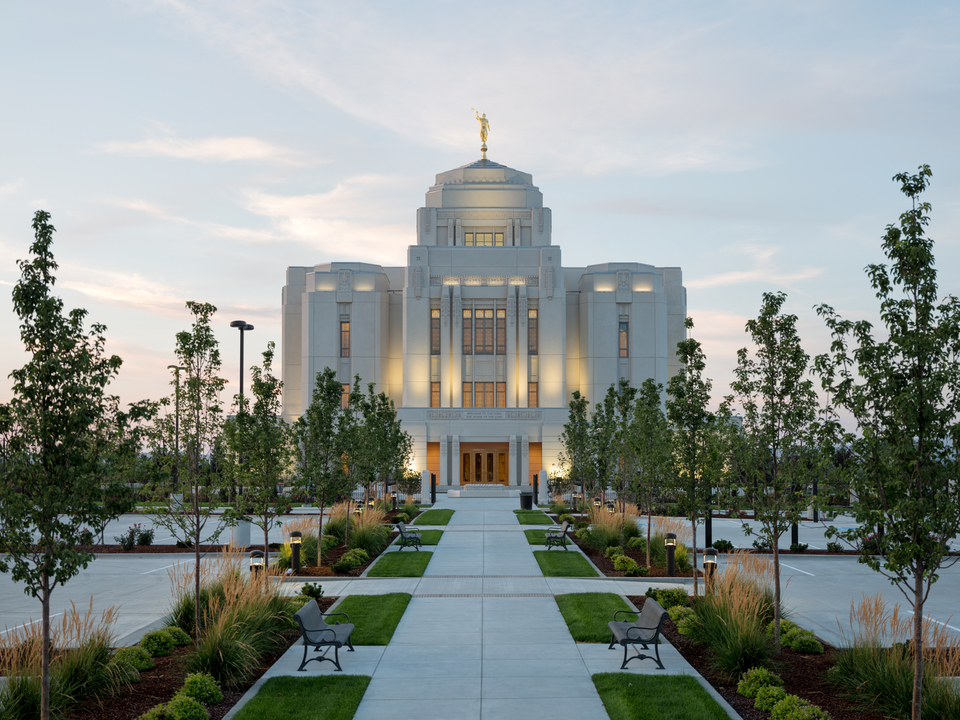 The beautiful Meridian Idaho Temple sits on the north end of the city along the Boise River and North Linder Road. The exterior design draws inspiration from the early temples of the Church including the Cardston Alberta Temple. A meetinghouse shares the temple site with a joint parking lot. The ample and well-manicured grounds are beautified by two large ponds and an expansive east lawn.

The Meridian Idaho Temple was announced during the Saturday Morning Session of the 181st Annual General Conference on April 2, 2011. Meridian was the third largest city and fastest-growing city in the state with a 115 percent increase in population from 2000 to 2010. During this time of rapid expansion, three additional stakes were organized in Meridian and four more in the surrounding communities of Nampa (the second largest city in the state), Kuna, and Middleton. It is located about 11 miles west of the capital city of Boise (the largest city in the state).1

On May 14, 2013, the official rendering of the Meridian Idaho Temple and site plan were released to the public in conjunction with a neighborhood meeting held as part of the government approval process.2 The design was a departure from the traditional towers and steeples of other temples, reminiscent of the Cardston Alberta Temple—the faith's first temple to be designed without a steeple or spire, though the Laie Hawaii Temple (based on the Cardston design) was dedicated earlier. The multi-level temple would be topped with a beautiful gold dome-like structure supporting a gold-leafed statue of the angel Moroni.

On August 8, 2013, the Ada County Planning and Zoning Commission approved the application for conditional use, master site plan, hillside development, private road, property boundary adjustment, landscaping, lighting, and signage approval for the Meridian Idaho Temple, an adjoining meetinghouse, and a utility building. The public hearing, which lasted four and a half hours, drew standing-room-only crowds and culminated in a 3-2 vote in favor of the plans with a restriction that nighttime lighting be limited to ground level after 10:00 p.m. The hearing first began on July 11, but it was tabled until the next meeting so that additional visuals representing the bulk, mass, and height of the temple as seen from the west and southwest could be produced.

On October 23, 2013, following a four-hour public hearing, the Ada County commissioners voted 2-0 to uphold the approval granted by the Planning and Zoning Commission for the Meridian Idaho Temple project. The hearing was scheduled after a resident appealed the commission's August 8 decision, saying that the temple would have an adverse impact on the continued enjoyment of her property. Nearly 60 people gave testimony, about 80 percent in favor of the temple.3

Elder David A. Bednar of The Quorum of the Twelve presided at the groundbreaking ceremony for the Meridian Idaho Temple on Saturday, August 23, 2014. He was accompanied by Elder Kent F. Richards, executive director of the Temple Department. Among the attending community and civic leaders were Meridian Mayor Tammy deWeerd, Eagle Mayor James Reynolds, and Ada County Commissioner Dave Cases. Elder Bednar encouraged those in attendance saying, "Let your gratitude continue long beyond this day, beyond the day of dedication, into the years when this temple will be a beacon and a light of the restored gospel of Jesus Christ."4

The 13-foot-6-inch statue of the angel Moroni was hoisted by crane to the top of the Meridian Idaho Temple on July 20, 2016. Once work began, a small crowd of onlookers gathered to watch and cheer.5

Nearly 6,000 youth from the 16 stakes of the Meridian Idaho Temple district gathered to Taco Bell Arena on the campus of Boise State University to celebrate the dedication of the temple through a musical cultural celebration, entitled "Be Strong, Steadfast, and Immovable" on Saturday, November 18, 2017. President Dieter F. Uchtdorf said, "Here in the wonderful Treasure Valley is a great treasure of young people of faith." The story goes that at the end of every rainbow is a pot of gold. "You are a much greater treasure than any treasure at any rainbow," he said. "You are the future of this community, of this area. You are the treasure of all those who live here: your own families, your own generations who passed before and who will follow, and for those who live in this beautiful area."6

President Dieter F. Uchtdorf, second counselor in the First Presidency, dedicated the Meridian Idaho Temple in three sessions on November 19, 2017. He said in his dedicatory prayer, "Bless all who attend this temple as patrons, workers, or in any other capacity that Thy sacred covenants and ordinances may be deeply anchored in their minds and hearts. May they know that the service they give is service unto Thee and may they find joy therein."