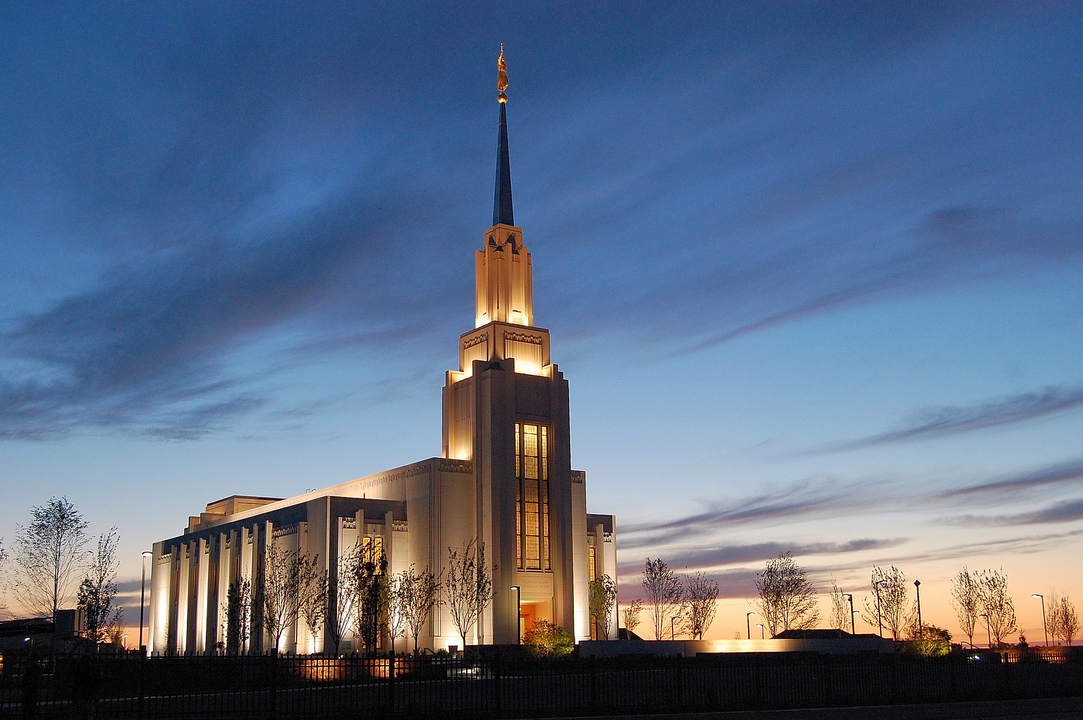 Situated just south of the Snake River Canyon in northeastern Twin Falls, the heaven-reaching spire of the Twin Falls Idaho Temple stands as the highest point in the region. Inspired particularly by the magnificent Shoshone Falls—just a 5-mile drive from the temple—the exterior design of this holy house incorporates a waterfall theme in its walls, its stained-glass windows, and its attractive landscaping including a pair of waterfall features at the temple's entrance. A meetinghouse, constructed at the same time, beautifully mirrors the temple to the west. The public is welcome to walk the temple grounds and to feel the peace inspired by this heavenly structure.

In 1996, the 14 stake presidents serving in the Magic Valley co-authored a letter to President Gordon B. Hinckley expressing their desire for a temple to be built in Twin Falls.

President Gordon B. Hinckley came to Twin Falls in June 2004 to select a site for the Twin Falls Idaho Temple among eight properties under consideration.

The former Candleridge Golf Course, located just south of the Snake River Canyon, was purchased as the site for the Twin Falls Idaho Temple. Of the 36 acres, just over 9 acres were retained for the temple and meetinghouse. The remainder was developed into residential lots.

A Syringa flower motif, created by Utah artist Tom Holdman, is used throughout the Twin Falls Idaho Temple including most of the 200 art-glass windowpanes with 12,000 pieces of glass. The Syringa is Idaho's state flower.

The finest materials were used for this House of the Lord including wood imported from Africa, granite from India, and stone from Montana.

The exterior walls of the Twin Falls Idaho Temple are made of 282 precast concrete panels with a quartz rock finish (mined in Washington state) that weigh up to 30 tons.

Ten thousand more visitors than anticipated toured the Twin Falls Idaho Temple during its five-week public open house for a total of 159,863.

On April 1, 1880, William C. Martindale received the assignment from Church leaders to leave the Tooele, Utah area to organize a branch of the Church in the Goose Creek Valley of southern Idaho. The first meeting was held just a few weeks later on Sunday, May 9, 1880, in a log cabin at Little Basin where 14 members were present. By 1881, the number of Latter-day Saints who had settled in Oakley and Little Basin increased to approximately 80 families, prompting the organization of the Cassia Ward. Elder Horton David Haight of Farmington, Utah, was called as the first bishop; he moved with his wife Louisa Leavitt Haight, who—though willing to serve wherever the Lord called her to labor—cried all the way to Oakley. As the population continued to increase so did congregations of the Church, leading to the creation of the Cassia Stake on November 19, 1887, Horton D. Haight being called as president. As additional stakes were created in succeeding years, the Cassia Stake was referred to as the mother of all stakes in south-central Idaho.1

By 1996, there were 14 stakes in the Magic Valley, and all the stake presidents were one in their desire for a temple in their midst. They co-authored a letter to President Gordon B. Hinckley requesting the First Presidency's consideration of Twin Falls for a temple. That desire was answered in June 2004, when President Hinckley met with Brent H. Nielson, president of the Twin Falls Idaho West Stake and great-grandson of Horton D. Haight, to choose a site for the Twin Falls Idaho Temple. Of the eight sites under consideration, President Hinckley chose the Candleridge Golf Course—a 36-acre parcel near the rim of the Snake River Canyon.2

The official announcement of the temple was delivered in the October 2004 General Conference. But even before the announcement was made, speculation of the temple's construction had run high when the Church's negotiations to purchase the Candleridge Golf Course had come to light that summer. The financially unprofitable course had already announced its intention to close on December 31, 2004, yet over 300 residents near the golf course produced a petition protesting the loss of the golf course to the temple, upset that their investments into homes next to a golf course would become investments into homes bordering a busy church. In response, the Church distributed printed materials, stating its intentions to work with neighbors in regard to traffic and parking when the time came to present plans to the city. Many other residents, both members and nonmembers alike, heartily welcomed the news—excited at the prospect of a fourth temple for Idaho.3

Plans for the temple, inspired by nearby Shoshone Falls, were unveiled on Thursday, October 6, 2005, at a press conference held in the former Candleridge Golf Course clubhouse. The stunning model on display showcased the white two-story temple, which would be capped with a gold-leafed angel Moroni atop a 153-foot spire—making it the highest point in the area. Also sharing the 9.1-acre complex would be a new one-story meetinghouse, over 300 parking spaces, and charming tree-lined boulevards and gardens. The Church, which went to great lengths to minimize the worries of neighbors, contracted with developer Ken Edmunds to subdivide the balance of the 36-acre plot to complement the existing neighborhood.4

The Twin Falls Planning and Zoning Commission approved the necessary permits for the building of the temple on November 8, 2005. The commission approved a special-use permit for a temple and a meetinghouse and also approved a variance for the temple to exceed the city's 35-foot maximum height limit. The commission's approval allowed the Church to move to the next stages of planning and to address parking concerns expressed by Commission members, who worried that the 300-space parking lot would be insufficient.5

Ground was broken for the temple on Saturday, April 15, 2006—the day before Easter Sunday. Presiding at the ceremony was Elder Neil L. Andersen of the Presidency of the Seventy, who himself was reared in Southeast Idaho. He honored the late apostle Elder David B. Haight, a native of Oakley, and shared the story of Elder Haight's parents' trip by buggy to wed in the Logan Utah Temple. "Our children and our children's children will not travel to the Twin Falls temple by buggy," said Elder Andersen, "but they, too, will remember their days in the Twin Falls temple. The temple is our solemn testimony to the immortality of the soul. We walk into the house of the Lord to be endowed there as the scripture says to be endowed from on high with power. This work that we commence today is a holy work. It will bless the city. We honor our neighbors, our kind neighbors, who have allowed us to worship as we believe."6

On Wednesday, May 30, 2007, a 13½-foot gold-leafed statue of the angel Moroni was set in place atop the single spire of the temple. Though efforts were made to keep news of the Moroni raising quiet, hundreds of spectators and cameras crowded the temple the day of the event eager to catch a glimpse of Moroni's ascent. Once the statue was in place and the crane pulled away, a spontaneous eruption of cheers and whistles filled the air. Seventeen-year-old Kelsee Nebeker said the installation of Moroni marked a milestone for the temple and for Twin Falls: "It just represents everything we have been hoping and waiting for."7

For five weeks preceding the dedication, the temple was opened to the public for tours of the interior. Tours commenced in the adjoining meetinghouse where visitors were shown an introductory video and then guided through the temple. Local stakes eagerly provided the 650 volunteers needed each day to conduct tours with responsibilities that included serving refreshments, directing traffic, and putting booties on the feet of all who entered the temple. The open house generated tremendous interest among friends of other faiths, who represented approximately 40 percent of the total visitors. Though 136,000 tickets had been reserved for tours, an additional 23,000 toured the building for a total of 159,863 visitors—10,000 more than had been planned for.8

The Saturday evening before the dedication of the temple, 3,200 Idaho youth were delighted to present a cultural celebration for their prophet, President Thomas S. Monson. Entitled Living Water, the celebration opened with a flurry of blue and white ribbons that turned the fairgrounds in Filer, Idaho, into a flowing river. Steven Tuft, who produced the program with his wife Susan, opened by saying, "In Magic Valley our physical lives depend upon mountain streams, irrigation wells and the Snake River. Our spiritual lives depend upon the living water from the Savior." The history of south-central Idaho was then told through music, voice, and dance, paying tribute to Native Americans, pioneers, European and Mexican immigrants, and even the Idaho potato. Alexandria Ackerman of the Filer Idaho Stake summarized her feelings this way: "Before living water was just a song we were singing.?Now it is like, wow, we have living water. You understand what it really means. It means more to you now that the temple is actually here."9

Throughout the weekend of the dedication, members felt the very personal love of a prophet, who often paused to shake hands and converse in his warm and cheerful tones. "Let them feel of Thy divine love and mercy," he asked in his dedicatory prayer. And indeed they did. Following the final dedicatory session, President Monson spent many minutes greeting the smiling Saints who lined the sidewalk from the temple entrance to his awaiting car. When he came upon Maria Eugenia Hernandez, he spoke to her in Spanish, even singing lines from a popular Spanish song with her. Maria was so deeply touched by the experience that for several minutes she could not speak because of her weeping and could not write because of her shaking hands. Pres. Monson's love was returned during his drive to the airport where families lined the roads holding signs that expressed such sentiments as these: "We love the scriptures." "We love the prophet." "We love the temple."10

"Though I live with it, this matter of temple construction is a thing of awesome wonder to me. We are trying to build in such a way and in such places across the world that these houses of the Lord may stand and serve through the Millennium."
—Gordon B. Hinckley