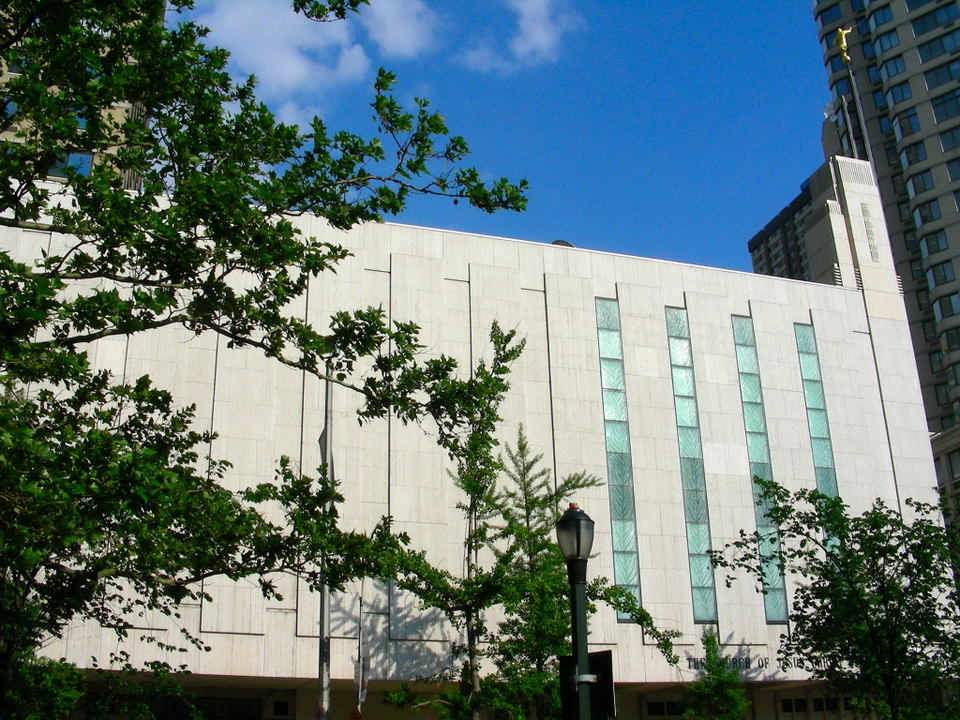 Located at the intersection of West 65th Street, Broadway, and Columbus Avenue, the Manhattan New York Temple stands among some of New York City's most prominent landmarks including Lincoln Center, home of the renowned Juilliard School, and Central Park. The temple proper occupies the top three floors of the edifice while the baptistry operates on the first floor; a meetinghouse spans the third floor, and the second floor houses a public affairs office and distribution center. From the lobby, there is a separate door to enter the temple inscribed Holiness to the Lord.

The Manhattan New York Temple was the third temple built from an existing building, following the Vernal Utah Temple (1997) and the Copenhagen Denmark Temple (2004). The temple is virtually a building within a building, which is completely soundproofed from the hustle and bustle of the City. The original building was a multipurpose stake center built in 1976.

The cornerstone of the Manhattan New York Temple is located within the multipurpose building but on an exterior wall of the temple.

The joint announcement of the Boston Massachusetts Temple and the White Plains New York Temple (later called the Harrison New York Temple) replaced the Church's previously announced plans to build a temple in Hartford, Connecticut, to serve both New York and New England.

President Gordon B. Hinckley read from his journal at a member meeting, testifying of the inspiration of the Lord in locating a temple for the New York City-area saints in Manhattan, noting that the efforts of the previous six years to build a temple in Harrison, New York, had repeatedly met the strong opposition of neighbors.

The fifth and sixth floors of the Manhattan New York Temple building closed on August 1, 2002, and demolition began on September 2, 2002, with construction starting the following spring.

Door handles shaped like the Statue of Liberty torch are found throughout the Manhattan New York Temple.

The Manhattan New York Temple received exceptional media coverage, including international coverage, largely due to its location in one of the most influential cities of the world.

The widely publicized public open house of the Manhattan New York Temple was attended by over 53,000 guests.

On Saturday, October 9, 2004, the figure of the angel Moroni was attached to the new steeple of the Manhattan New York Temple.

In a special regional conference held in New York City on March 24, 2002, President Gordon B. Hinckley told the attending congregation that he expected a temple to be completed in New York within two years. Less than five months later, the Church's announcement of a temple to be built in Manhattan made good on that promise.1

In the decade preceding the temple dedication, New York area membership increased dramatically, tripling to 42,000. The rapid growth was largely attributed to immigration and aggressive proselytizing in black and Latino communities.2

In a clever adaption, the Church gutted and soundproofed the upper and lower floors of its existing multi-function Manhattan building, located across from the Lincoln Center, to secure a location for the temple in the city. The original building was completed in 1976 during a transition period for the area from rough to ritzy. This multipurpose approach to temple building had already been successfully executed in Hong Kong where real estate costs are exorbitant.3

Over 53,000 visitors from all walks of life and religious backgrounds attended the 40-minute tour during the monthlong open house. Though some mild sidewalk protesting was seen in the form of anti-Church literature, public reaction was highly positive, and media coverage was worldwide.4

Prior to the temple dedication, a cast of 2,400 New York youth gathered at Radio City Music Hall to perform "A Standard to the Nations," a two-hour jubilee performance full of song and dance, which briefly illustrated the history of the Church in New York and recognized the cultural mix there. President Gordon B. Hinckley started the custom of asking young adults to participate in cultural arts programs to celebrate temple dedications as part of his quest to make church more engaging for youth. New York youth kept the tradition going, following the example of members in Alaska, Ghana, and Denmark, who performed before their temples' dedications.5

At the temple dedication, a time capsule was placed in the cornerstone filled with New York memorabilia including a commemorative gold-detailed white satin handkerchief patterned after a handkerchief Joseph Smith commissioned for the dedication of the Kirtland Temple. The capsule also contained a copy of the New York Times, a commemorative crystal, a set of LDS scriptures, sheet music, and more.6

Just two-and-a-half weeks before the temple's summer dedication, Church headquarters announced that it had revised the exterior design for the temple. New cladding would be attached to portions of the building's south and west sides, and a steeple topped by the angel Moroni would be added to the roof in the fall. On Saturday, October 9, 2004, hundreds of onlookers filled the streets of Manhattan to witness the placement of the 10-foot angel Moroni upon the temple's new spire.7