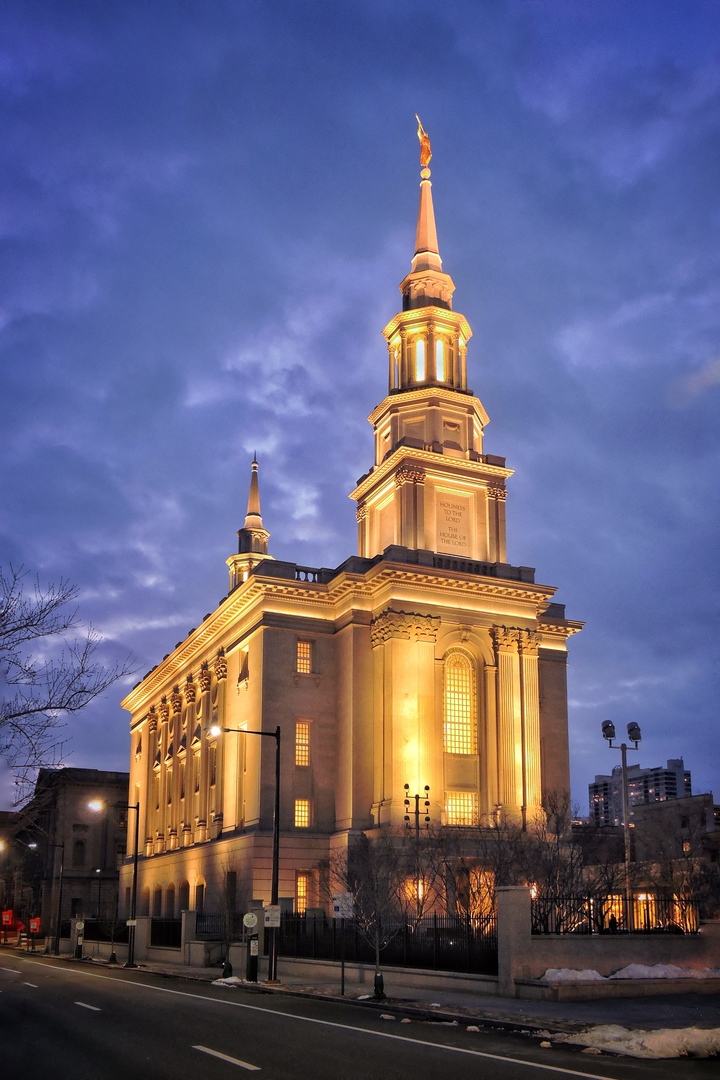 President Henry B. Eyring, First Counselor in the First Presidency, presided over the groundbreaking ceremony for the Philadelphia Pennsylvania Temple on Saturday, September 17, 2011—the 224th anniversary of the signing of the Constitution of the United States at Philadelphia's Independence Hall.1

In January 2010, Church officials met with top administration officials of the City of Philadelphia to review preliminary plans for the Philadelphia Pennsylvania Temple. Darrell Clarke, councilman for the 5th district, referred to the plans as magnificent. "I think it's important for the city of Philadelphia to have such a facility in the city, as opposed to the suburbs. I think the long-term benefits of bringing that many people—upwards of 400,000 visits per year to the city—is very significant."2

On Thursday, April 15, 2010, Councilman Clarke introduced a bill to the City Council to amend Section 14-1611 of The Philadelphia Code, entitled "Benjamin Franklin Parkway Controls." The proposed ordinance would exempt certain building features from being considered as part of the height of a building within a specified area subject to the Benjamin Franklin Parkway Controls, which would allow for construction of the preliminarily designed Philadelphia Pennsylvania Temple. The bill was referred to the Committee on Rules.3

On May 12, 2010, the Committee on Rules—a committee organized under the Philadelphia City Council—held a hearing to receive public comment on the ordinance, which would allow "monuments, belfries, cupolas, minarets, pinnacles, gables, spires, or ornamental towers not intended for human occupancy" to exceed the 125-foot height limit imposed on buildings subject to the Benjamin Franklin Parkway Controls up to a maximum of 209 feet. Following the hearing, the Committee unanimously recommended City Council approval, which would permit construction of the temple with double spires that reach just over 200 feet high.4

On May 18, 2010, the Philadelphia City Planning Commission added its endorsement to the zoning code amendment recommended by the Committee on Rules. Church spokesman Ahmad Corbitt explained to the Commission that three meetings with the community had already been held where the plans were explained; neighbors were supportive. He also noted that the spires will not reach the top of the cross of the Cathedral of Saints Peter and Paul across the Parkway.5

On June 3, 2010, the Philadelphia City Council voted unanimously to approve the height ordinance in its second and final vote, enacting the ordinance into law. The first vote was taken on May 20.

On June 7, 2010, interagency discord was plainly evident at a hearing where City Councilwoman Jannie L. Blackwell—chair of the committee on housing, neighborhood development, and the homeless—criticized the Redevelopment Authority (RDA) for taking legal action in an attempt to reclaim land in high-profile, Council-supported projects including the Philadelphia Pennsylvania Temple. "Why fight projects we support?" Blackwell asked RDA director Terry Gillen. The RDA brought legal action against Stephen Klein, who has development rights on the property, on grounds that he let the site sit undeveloped too long. Klein signed an agreement to sell the site to the Church on August 10, 2009.6

On August 2, 2010, Philadelphia Mayor Michael Nutter announced that construction of the Philadelphia Pennsylvania Temple would move forward at its Vine Street location near Logan Square. The fate of the project came under question when the RDA attempted to seize the property by suing the site's developer for letting the property remain undeveloped for too long. RDA officials then offered to drop the lawsuit if the developer would pay the agency 25 percent of the proceeds of the sale of the property to the Church. The mayor did not elaborate on how this dispute had been resolved, but he did express that the addition of the temple would make Benjamin Franklin Parkway "one of the most incredible boulevards anywhere in the world." Final site plans and architectural drawings, which may be available in September, still must go before the Planning Commission and City Council before final City approval is received.7

On September 8, 2010, Mayor Nutter announced the unpetitioned contribution of $300,000 from The Church of Jesus Christ of Latter-day Saints to Philadelphia's prisoner-reentry program, namely the Mayor's Office of Reintegration Services for Ex-Offenders (RISE). The program assists former prisoners to reenter society through schooling, job training, job placement, housing, drug and alcohol treatment, and "life coaches." Church leaders selected the program because "it fits with the mission of the Church." The month before, the mayor announced preliminary approval of the Church's plan to construct the Philadelphia temple. Renderings of the project have not been released, but the groundbreaking is expected to occur in late 2011 with completion anticipated in 2014.8

On September 21, 2010, the Philadelphia City Planning Commission approved an amendment to the Center City Redevelopment Area Plan, which would accommodate the Church's plans for facilities on Vine Street, including the temple.

On October 3, 2012, the Philadelphia Art Commission granted conceptual approval to plans to erect the Philadelphia Pennsylvania Temple. Commission Chair Sean Buffington requested that the applicants return with more clarity on the depth and richness of the building's façade, a better plan for the landscaping and stormwater use, a selection of alternate views of the building and its impact on its "very distinguished neighbors," and a more complete lighting scheme.9

On November 7, 2012, the Philadelphia Art Commission gave the design of the Philadelphia Pennsylvania Temple the final nod with two last-minute dissenting votes. At the meeting, the applicants presented additional details on stormwater management, lighting, façade materials, and landscaping as requested during their previous appearance before the Commission on October 3. One commissioner argued that honey locusts might be too lacy a choice for the building, and another commissioner voiced the opinion that while certain elements of the building were praiseworthy, the overall design was "too literal" in its classicism and imitative of its neighboring buildings. When the other commissioners were asked if they supported this opinion, no one responded. In the end, only these two commissioners voted "no" on the motion to approve the project.10

The granite-clad Philadelphia Pennsylvania Temple has been designed with architectural elements to complement the classic architecture exhibited in the neighboring buildings and throughout historic Philadelphia where the United States was founded in 1776. The spires, for example, are reminiscent of the clock tower on Independence Hall, and the period furnishings inside the temple will create an air of historic Philadelphia. Exquisite panes of stained glass will run the length of the building, which will be surrounded by a landscaped plaza featuring a reflecting pool and gorgeous gardens open to the public. Also on site will be a low-profile temple services building. Ample parking will be provided by an underground facility.

B. Jeffrey Stebar of the Atlanta office of Perkins+Will was selected as the lead architect of the Philadelphia Pennsylvania Temple. President Stebar is a counselor in the stake presidency of the Fayetteville Georgia Stake.

The Philadelphia Pennsylvania Temple will be erected in Center City Philadelphia on the site of a parking lot at the northeast corner of Vine Street and North 18th Street across from the Cathedral Basilica of Saints Peter and Paul and diagonal to beautiful Logan Square.11 Learn about the acquisition of the temple site.

The temple was originally to be a multipurpose building constructed at the northeast corner of North Broad Street and Noble Street, but contamination problems on the site—discovered after the purchase—prohibited the Church from using the entire parcel as planned. Church officials began combing the city for another suitable site and by May 2009, they had contacted Stephen Klein dba Logan Place Associates about his Vine Street property. On August 10, 2009, Klein signed an agreement to sell the property to the Church for an undisclosed sum.12

Late in 2010, the Church became the owners of the Vine Street property when sale of the parcel was finalized. Peter Kelsen, a Blank Rome attorney representing the Church on the project, indicated that the Church would quickly move forward with the necessary land and zoning approvals to allow ground to be broken. He noted that an opening is targeted for 2013.13

President Thomas S. Monson announced that the City of Brotherly Love would be home to Pennsylvania's first temple during his opening remarks of the 178th Semiannual General Conference. The temple was announced jointly with four other temple locations including Calgary, Canada; Córdoba, Argentina; Kansas City, Missouri; and Rome, Italy.14

Several significant events in Church history took place in Pennsylvania including much of the translation of the Book of Mormon and the restoration of priesthood authority. The Church was first established in Pennsylvania in 1839—growing to 450 members by October 1840. Membership fell following the migration of the Saints to Salt Lake but grew again as Mormon European emigrants arrived. Eventually the first stake was organized in 1960 with 1,100 members located in congregations in southeastern Pennsylvania, New Jersey, Delaware, and Maryland. Today there are nearly 48,000 members in Pennsylvania alone.15

Elder Jay E. Jensen of the Presidency of the Seventy unveiled the official rendering of the Philadelphia Pennsylvania Temple for the first time at a VIP event held prior to a Tabernacle Choir at Temple Square concert in Philadelphia's Mann Center on June 24, 2011.

Library, both located just west of the temple.

"It is in these holy houses that faithful couples enter into the ordinance of celestial marriage through which they become parties to the Abrahamic covenant."
—Bruce R. McConkie