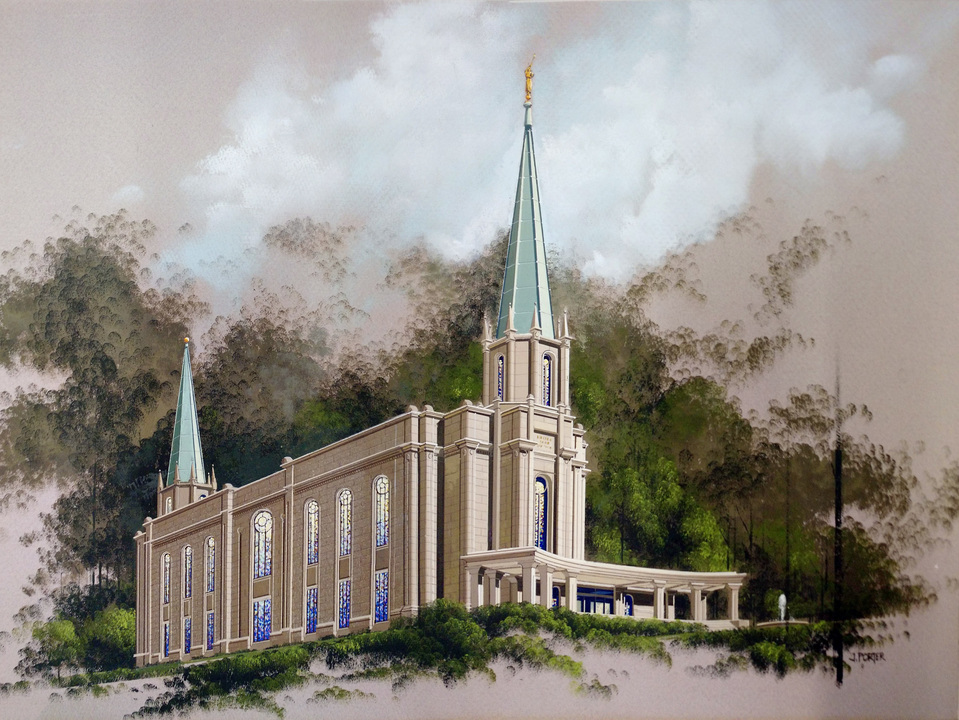 © The Church of Jesus Christ of Latter-day Saints. All rights reserved.

Mid-2000s, following the dedication of the Manhattan New York Temple (2004)

On September 30, 1995, during the priesthood session of General Conference, President Gordon B. Hinckley announced that plans for a regional temple in Hartford, Connecticut, which would serve the New York and New England areas of the United States, had been replaced with plans for two temples for the region in Boston, Massachusetts, and White Plains, New York—later designated Harrison, New York, in October 1999. "In other words," said Pres. Hinckley, "there will be two [temples] to serve the needs of the people where originally it was planned that one would do."1

On March 8, 1996, the Church purchased a beautifully wooded 24-acre site for the temple at the highly accessible intersection of Interstate 287 and Hutchinson River Parkway.2 The location of the site in Harrison was reflected in a name change made during a major renaming of many of the Church's temples to a uniform guideline in October 1999, making the White Plains New York Temple the Harrison New York Temple.3

Joseph Cannella chaired the Harrison Planning Board when the Church submitted its plans for the temple. He takes credit for the Church scaling down its project from 89,700 square feet to 56,000 square feet; removing a third floor; eliminating one steeple and four spires—swapping the 159-foot main spire for a 115-foot single spire; reducing the number of parking spaces; diminishing the proposed flood lighting; and agreeing to no visitors center, family history center, or pageant on the temple grounds.4

Revised plans called for a 44-foot-high temple, requiring the Church to make application for a variance to the 30-foot height limit imposed on the residences of that neighborhood. The request came before the Harrison Zoning Board of Appeals on Thursday, September 28, 2000. In a 5-2 vote, the Board denied the Church its variance, though the chairman suggested an alternative solution may be viable. While the Church met the ruling with disappointment, dozens of residents who staunchly opposed the building applauded the decision.5

On March 10, 2001, New York State Supreme Court Justice Peter Leavitt overturned the decision of the Harrison Board of Appeals, ordering a variance to be issued to allow construction of the temple. The Church's victory was short lived, however, as the Board countered by filing its own appeal.6 Despite the pending lawsuit, the Church attended a public meeting with the Harrison Town Board on June 11, 2001, requesting a special exception permit, which specifies how the temple will be used. Overwhelming opposition was expressed by neighbors including concerns over traffic, size of the building, height of the steeple, and nighttime flood lighting of the exterior.7

The town meeting launched eight months of wrangling between the Church and residents in the form of public hearings, four traffic studies, and environmental reports. Having exhausted its administrative options after its numerous concessions, the Church was left with no option but to file suit on December 17, 2001, accusing the town of infringing on freedom of religion and assembly.8

The spirit of compromise filled members of the Harrison Town Board, who unanimously voted on April 30, 2002, to approve a proposed settlement with the Church, when it became clear that the town would likely lose in court and spend millions of dollars if legal action were pursued. The agreement resulted in numerous additional concessions by the Church including reducing the building from 56,000 square feet to 28,400 square feet, dropping the number of seats from 200 to 100, lowering the height of the building from 44.7 feet to 34 feet and steeple from 115 feet to 105 feet, trimming the number of parking spaces from 198 to 135, paying for any damage to Kenilworth Road caused by construction, and refraining from building anything else on the property for 15 years after the temple opens.9

In August 2002, the Church announced its plans to build the Manhattan New York Temple inside an existing Church-owned building. Though the seven-year dispute in Harrison contributed to the decision, significant membership growth in the city was emphasized, as explained by Stake President Brent Belnap: "Growth in the five boroughs has been so great, that the logic of having a temple within easy access to public transportation in the heart of the city makes far more eminent sense."10

By January 2004, the Church had not indicated how the opening of the Manhattan temple later that year may affect its decision to build in Harrison, but James Staudt, a White Plains lawyer representing the Church, told The Journal News, "It will be built." He explained that the Church was working to connect the property to a sewer line on the other side of Hutchinson River Parkway—a complex, time-consuming project that had to be completed before the town would issue a building permit. Once completed, the church would move on to the next phase of construction, he said.11 After the Manhattan temple opened, however, activity at the Harrison site died down. By 2006, the Harrison New York Temple had been quietly removed from the Church's official list of announced temples. The decision to build a temple on this site would constitute a new announcement.