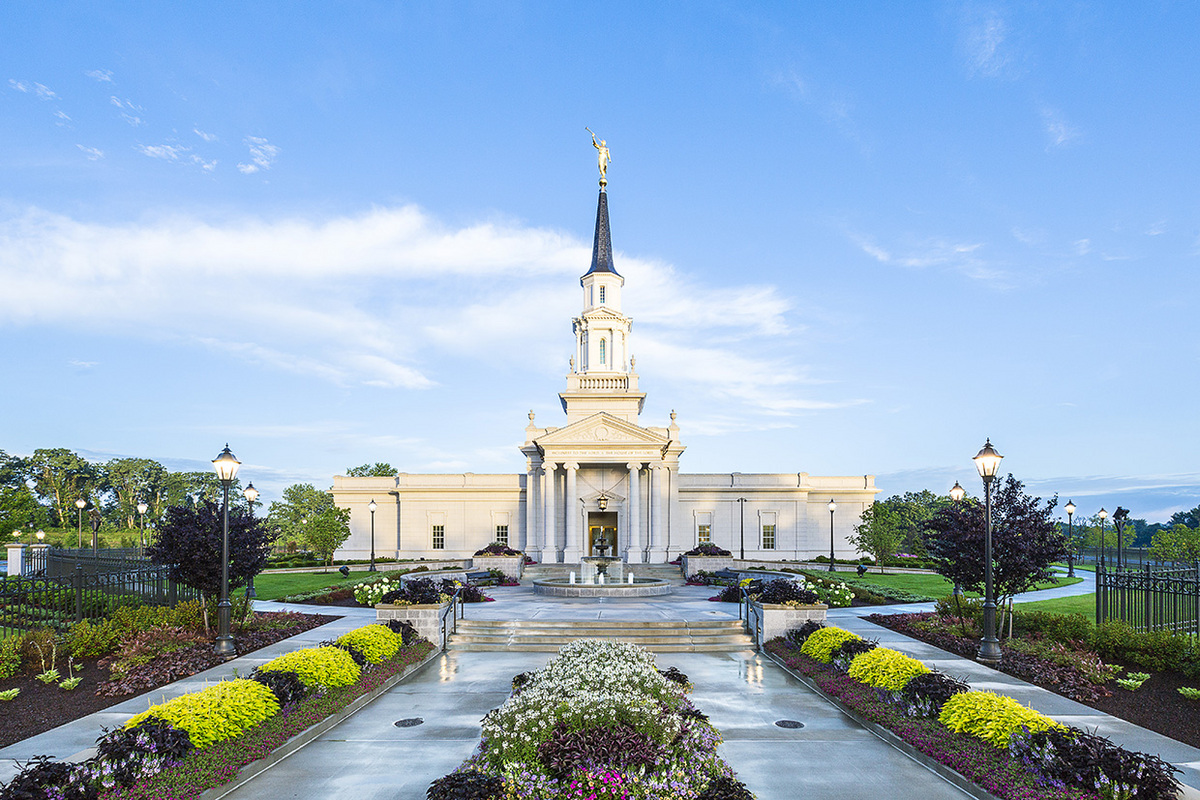 The Hartford Connecticut Temple stands on an 11-acre site at the corner of Farmington Avenue and Melrose Drive in Farmington, Connecticut—the birthplace and childhood home of Wilford Woodruff, the fourth president of The Church of Jesus Christ of Latter-day Saints. The white granite-clad temple features an entrance portico with Ionic columns and an elegant steeple rising to 115 feet. The design is reminiscent of the historic First Church of Christ Congregational church in Farmington, completed in 1772. The grounds are formally landscaped with colorful foliage and curving walkways and parking areas, enclosed by a low New England-style stone fence.

President Thomas S. Monson announced the construction of the Hartford Connecticut Temple in the opening session of the 180th Semiannual General Conference.1 Plans had been announced for a temple in Hartford at General Conference 18 years earlier, but it was decided three years later that two other temples would be built in its place—one to the north in Boston, Massachusetts and one to the south in White Plains, New York, later named the Harrison New York Temple. Plans for the Harrison temple were suspended following the dedication of the Manhattan New York Temple.

Peter Fishman, the former owner of the Hartford Connecticut Temple site, initially had reservations about the project until he was shown a rendering of the building and given an explanation of its purpose and operation. "[The Church is] proposing to build an incredibly beautiful, very New England-appropriate temple that is going to be a significant landmark in this town for hundreds of years." He added, "I've seen what it's going to look like and it's going to be glorious—like a museum. It's going to be really a fantastic building, exceptionally well-built."2

On Saturday, August 17, 2013, President Thomas S. Monson presided at the groundbreaking ceremony for the Hartford Connecticut Temple. About five hundred gathered at the site with thousands more watching by satellite broadcast in area meetinghouses. "Today is a special and sacred day as we bring to fruition the hopes and dreams of the Church members here and break ground for the Hartford Connecticut Temple," President Monson said. "Each [temple] stands as a beacon to the world, an expression of our testimony that God our Eternal Father lives, that He desires to bless us and indeed bless His sons and daughters of all generations."3

Some 1,100 young men and women from eight stakes expressed their excitement for the Hartford Connecticut Temple through song and dance at the youth cultural celebration held the evening before the dedication. President Henry B. Eyring was in attendance and told the youth "that this temple in Hartford is an important part of the marvelous work of Heavenly Father and His Beloved Son, Jesus Christ, to bring the light of the gospel into your lives and the lives of thousands of others."4

President Henry B. Eyring of the First Presidency presided at the dedication of the Hartford Connecticut Temple on November 20, 2016. In his dedicatory prayer, he said: "May this house be ever sacred to those who enter it and to those who look upon it. May it truly be a house of the Lord, a place of sanctification and holiness. May the influence of this house be extended into the families, the homes, the neighborhoods, and the communities of those who will come to this temple."5

During the Saturday afternoon session of General Conference on October 3, 1992, President Gordon B. Hinckley, First Counselor in the First Presidency, announced plans for a regional temple to be built in Hartford, Connecticut, to serve members in the New York and New England areas of the United States. Plans were also announced for a temple in Hong Kong to serve a large region of Southeastern Asia and for a second temple in Utah County to relieve the overburdened Provo Utah Temple—later identified as the Mount Timpanogos Utah Temple.6

Three years after the announcement, plans for the Hartford Connecticut Temple were replaced. President Gordon B. Hinckley explained in the priesthood session of General Conference, "After working for years to acquire a suitable site in the Hartford area, during which time the Church has grown appreciably in areas to the north and south, we have determined that we will not at this time build a temple in the immediate area of Hartford." Plans were then announced for temples in Boston, Massachusetts, and White Plains, New York. "In other words," he said, "there will be two [temples] to serve the needs of the people where originally it was planned that one would do. We have sites in both of these new locations."

To the members of Hartford who had joyed in the announcement of this temple, Pres. Hinckley said, "We apologize to our faithful Saints in the Hartford area. We know you will be disappointed in this announcement. You know that we, and your local officers, have spent countless hours searching for a suitable location that would handle the needs of the Saints in New York and New England. While we deeply regret disappointing the people in the Hartford area, we are satisfied that we have been led to the present decision, and that temples will be located in such areas that our Saints in the Hartford area will not have to drive unreasonable distances."7

On January 23, 2012, Church representatives made an informal presentation to the Town of Farmington Plan and Zoning Commission to discuss potential plans for construction of the Hartford Connecticut Temple on an 11-acre parcel at the corner of Farmington Avenue and Melrose Drive. Church architect Kerry Neilson noted that the search for an appropriate site had been underway for over a year, having investigated 20 different locations in the Hartford area before selecting Farmington. "The temple is a sacred building," Neilson said. "We consider it a house of the Lord." He explained that a temple differs from a church building where Sunday services are held in large meeting halls. Temples, rather, are reserved exclusively for sacred ceremonies and instruction given to small groups.

If the temple were approved, five houses along Farmington Avenue and the former Whitman Restaurant—a 12,000-square-foot facility with an 80-car parking lot—would be razed. In their place would be constructed the temple, a surface parking lot with over 100 spaces, a residence for the temple president (caretaker), and several acres of beautifully landscaped grounds. A new backage road called "New Town Road," connecting Bridgewater and Melrose, would also be constructed and regulated by traffic lights. Because the site is partially zoned commercial, a zoning amendment or rezoning would be required.8

On May 7, 2012, a team of representatives for The Church of Jesus Christ of Latter-day Saints—including a project manager, civil engineer, landscape designer, soil scientist, and others—presented plans for the Hartford Connecticut Temple to the Town of Farmington Inland Wetlands Commission. The proposed site for the temple was subject to the commission because of its proximity to the Farmington River and to various wetlands areas. Project Manager Kerry Nielsen informed the commission that the project would improve water quality and have no effect on the wetlands alluvial soils (those nearest the river.) "We build sites that are meticulously planned out and maintained," Nielsen said, noting that the Church would work to create a Farmington landmark. The commission tabled the item until its next meeting.9

On May 23, 2012, the Town of Farmington Plan and Zoning Commission held a public hearing to receive public input on a request to change zoning for the Hartford Connecticut Temple site from Business-Retail to R-30, which allows religious institutions, and a request for special permit and site plan approval. Dozens of residents attended the hearing where a two-hour PowerPoint presentation was given by lead architect Kerry Neilson, traffic engineer Fred Greenberg and civil engineer Ray Gradwell. The site plan presented featured the 25,000-square-foot temple, 2,260-square-foot temple president residence, and 753-square-foot service building. Stone and concrete pathways would wind through generously landscaped grounds.

Following the presentation, four residents rose to speak, posing various questions including estimates on the final height of the spire and the building's elevation above the flood plain. Just one resident voiced concern with the project, saying it would contribute to the traffic on already congested Route 4; commissioners echoed the sentiment. Neilson responded that the Church plans to incorporate a left-turn lane on both the eastbound and westbound sides of Farmington Avenue near Melrose Drive. An access road connecting Melrose Drive and Bridgewater Road is also proposed, which would give two additional entry points. Greenberg reassured residents and the Commission that the impact on traffic levels would be negligible with peak levels occurring on Saturday, not weekdays. The temple would be closed on Sundays and Mondays. No vote was taken by the Commission, which would occur at a later date.10

On May 24, 2012, the Town of Farmington Inland Wetlands Commission resumed its review of the proposed plans for the temple site. The commission unanimously approved the project with the following conditions: (1) revise the western landscape yard to show a more varied plan that enhances the wildlife value of the adjacent wetland, final plan to be approved by Planning staff; (2) the applicant shall submit an Integrated Pest Management Plan prior to issuance of a building permit; (3) to the greatest extent possible, imported soil shall be similar composition to existing soils on the site; (4) at least 75% of the plant species on the total landscape plan shall be native to the area; (5) a reverse slope bench shall be incorporated into the berm to the south of the proposed road; (6) a conservation easement shall be established around the wetland near the southwest corner of the property and along the western landscape yard to provide linkage and buffering for the adjacent offsite wetlands; final boundary to be approved by Planning staff and shown on site plan, and shall be marked with pins and medallions as per the zoning regulations and Town's model conservation easement document; (7) no snow stockpiling shall be allowed in the parking area nearest maintenance building and the southwest detention basin, or in the detention basin itself.11

On June 19, 2012, the Town of Farmington Plan and Zoning Commission resumed a public hearing to receive input on the Hartford Connecticut Temple project. Church architect Kerry Nielsen began with a summary of the project and provided additional information as requested by the commission at the previous meeting. "We're hoping that we've done a good enough job, a favorable job, of addressing your concerns," Nielsen said. Some citizens were not satisfied, however, and expressed fears of increased traffic on already-congested Route 4. After taking these comments into consideration, the commissioners unanimously approved the request to change zoning for the site from Business-Retail to R-30 and to grant a special permit and site plan approval for construction of the temple, its associated site improvements, and a new public road.12

On October 25, 2012, the deed transferring ownership of the Hartford Connecticut Temple site from Waterside Ten to The Church of Jesus Christ of Latter-day Saints was recorded.