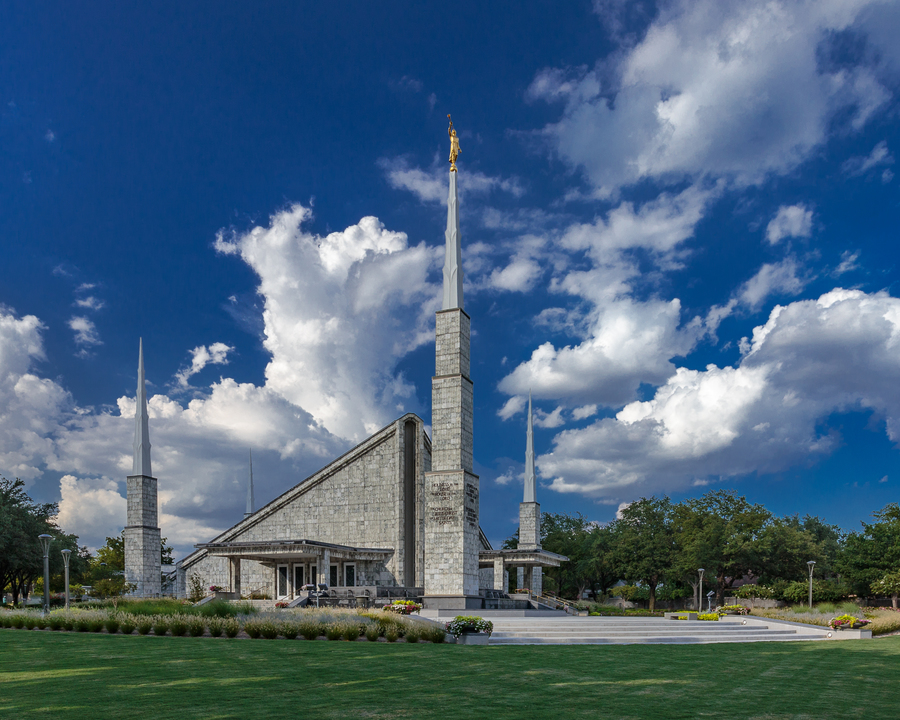 The six spires of the Dallas Texas Temple rise among the mature trees of a wooded residential area in northern Dallas. The dramatic spires coupled with the large sloping roof of the temple draw the eyes heavenward, indicative of the building's holy purpose. Trimmed hedges and vibrant flowers are highlights of the beautifully tended grounds.

The Dallas Texas Temple was the first temple built in Texas.

The Dallas Texas Temple is a sister building to the Boise Idaho Temple and the Chicago Illinois Temple.

The invitation-only groundbreaking ceremony for the Dallas Texas Temple was attended by about 90 guests including Regional Representatives, stake presidents, and their wives.

During the 20-day public open house of the Dallas Texas Temple, approximately 88,000 visitors toured the interior of the building.

At the dedication of the Dallas Texas Temple, President Gordon B. Hinckley noted that there were many larger and more expensive buildings in Texas but that the temple was the most significant of all in the Lone Star State.

The Dallas Texas Temple closed in 1987 for remodeling that added an additional 22,749 square feet, accommodating an additional ordinance room, a cafeteria, expanded laundry facilities, and a larger relocated baptistry.

A renovation of the Dallas Texas Temple grounds was completed in June 2006. The monument sign was relocated outside the decorative fence, and fence itself was altered along the front side of the property. The entry plaza was enlarged, and stairs were added to create better access to the grounds. The water feature was replaced with a cascading fountain while flower beds were made larger and replanted. Several walkways were widened with added lighting and sitting areas.

Excitement ran high at the announcement of the Dallas Texas Temple. In Tulsa, Oklahoma, for example, temple recommend interviews tripled, and Laurels began making plans for a trip to perform baptisms for the dead. In Corpus Christi, members started committing to attend the temple, and the youth were elated. Members of the Shreveport Louisiana Stake contributed two-thirds more than requested to the construction fund.1

The announcement had a much different effect among local Bible Belt religious leaders who held a negative view of the Church. The news sparked alarm and profound opposition. As the temple progressed, however, opened its doors to the public, and then took its place in the community, many leaders took the opportunity to re-evaluate their feelings toward the Church. Because of the temple, negative feelings were softened and misconceptions corrected.2

At the groundbreaking of the Dallas Texas Temple, President Gordon B. Hinckley said, "I feel today in this great state, and all this vast territory, there is no building of such tremendous significance as will be the building we begin this day." The private ceremony was attended by about 90 area leaders including Regional Representatives, stake presidents, and their wives. Also speaking was Elder Jacob de Jager of the First Quorum of the Seventy. As a convert to the Church, he testified of the great happiness and peace he has found in his life through participation in temple ordinances.3

Throughout construction of the temple, members readily answered the call to serve. The contractor was pleasantly surprised at the turnout of several hundred members in response to a request for clean-up help. Others, like sisters in Harlingen who lived far from the temple, contributed knitted goods. A widow who was asked to donate twenty dollars gave one hundred dollars instead saying: "This is money I've been saving to go to the temple in Salt Lake City, but I'll contribute it to the building fund and go to the temple here."4

Of the more than 88,000 visitors to the open house, about 56 percent were nonmembers—many having been invited by missionary-minded members. Visitors valued their experience, expressing appreciation for the Church and its efforts. Indeed, less than a week after the open house concluded, one visitor had already been baptized; several others followed.5

Ordinance work in the Dallas Texas Temple has been performed for historical figures of special significance to the citizens of Texas. For example, work was completed in 1986 for those involved in the tragedy at the Alamo on March 6, 1836. In addition, work for 1,500 "Trail of Tears" Choctaw Indians was performed in the temple.6

"When you come to the temple you will love your family with a deeper love than you have ever felt before. The temple is about families."
—Richard H. Winkel