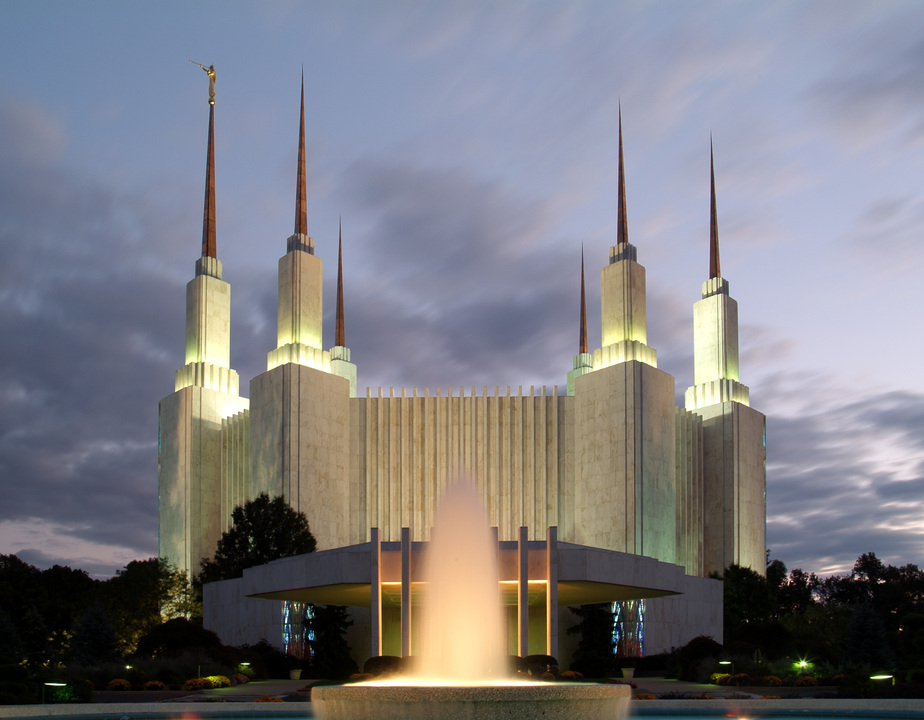 On March 3, 2018, the Washington D.C. Temple closed for an extensive renovation project. The temple's mechanical and electrical systems will be upgraded, and all finishes and furnishings will be refreshed. A minor addition to the exterior will house stairs and a new elevator system. Changes will also be made to the grounds. The temple is anticipated to reopen in 2021, following a public open house and rededication ceremony. The visitors' center will remain open during the entire renovation, and the annual Festival of Lights will still go on display in December.1

Standing on sprawling grounds about 10 miles north of the United States Capitol, the gold-spired Washington D.C. Temple is a well-known landmark along the Capital Beltway in Kensington, Maryland. The beauty of this soaring edifice is enhanced by a reflection pond near the visitors' center and a spouting water feature at the temple entrance. Sharing the 52-acre wooded site are the Washington D.C. Stake Center and the beautiful Washington D.C. Temple Visitors' Center, which hosts numerous interactive exhibits, a breathtaking reproduction of the Christus statue, and regular lectures and concerts throughout the year. Admission is free. At Christmastime, the grounds are set aglow during the Festival of Lights, which offers nightly concerts, a live nativity scene, and international nativity sets.

A free temple shuttle, funded by donations, is offered to patrons and visitors traveling between the Metro and the Washington D.C. Temple.

The Washington D.C. Temple was the first temple built in the Eastern United States (and in Maryland).

The Washington D.C. Temple was the first temple to feature six spires since the construction of the Salt Lake Temple, which inspired the design.

Soaring to a height of 288 feet, the Washington D.C. Temple is the tallest temple in the Church.

Avard T. Fairbanks was one of nine sculptors who presented models for the Washington D.C. Temple angel Moroni. The 18-foot tall statue was cast in bronze, then covered with gold leaf. Moroni holds the gold plates in his left hand and a trumpet in his right. Fifteen-foot replicas of the statue were used on the Jordan River Utah Temple, Seattle Washington Temple, and México City México Temple.

Under the general direction of Church Architect Emil B. Fetzer, four architects collaborated on the design for the Washington D.C. Temple: Fred L. Markham, Henry P. Fetzer, Harold K. Beecher, and Keith W. Wilcox. Of the many design concepts submitted to the First Presidency, Brother Wilcox's design was selected.

The exterior of the Washington D.C. Temple is faced in white Alabama marble, symbolizing purity and enlightenment, which is shaved to 5/8 of an inch in some areas to allow a soft glow of sunlight to pass into the interior during the day.

Beautiful stained glass runs the length of the end towers of the Washington D.C. Temple with rich, vibrant reds and oranges giving way to more translucent blues and violets and finally white. The windows represent the unbroken progress toward the divine available in the gospel and the purity that enters one's life as he rises above earthly cares and reaches heavenward.

Eight bronze medallions—symbolizing creation, mortality, and the degrees of glory—are featured on both the gates and the doors of the Washington D.C. Temple. Sculptor Franz Johansen, a member of the Church, depicted the Big Dipper and North Star, the earth, the planets, the moon, the stars, the sun, concentric circles representing eternity, and seven concentric pentagons representing the seven dispensations.

The main lobby of the Washington D.C. Temple features a striking 30-foot-long mural depicting the Second Coming of Jesus Christ. An image of the temple itself is incorporated into the mural.

The seven floors of the Washington D.C. Temple represent the six days of creation and the day of rest.

Following the completion ceremonies for the Washington D.C. Temple, in which a time capsule was placed in the northeast corner of the building, President Spencer W. Kimball conducted the largest press conference in the Church's history.

The highly successful public open house of the Washington D.C. Temple was attended by 758,328 guests including special guest Betty Ford—wife of then-U.S. President Gerald Ford. These tours resulted in over 75,000 missionary referrals.

General authorities spoke at each of the ten dedicatory sessions for the Washington D.C. Temple. All of the Church's general authorities were in attendance except for two: Elder Alma Sonne, Assistant to the Council of the Twelve, and President Milton R. Hunter, First Council of Seventy.

For a time, the Washington D.C. Temple offered overnight endowment sessions from Friday through Saturday to accommodate the many members who came on the weekend.

"Just as the Salt Lake Temple took 40 years to build, stone by stone, you are building a virtuous life, step by step."
—Mary N. Cook