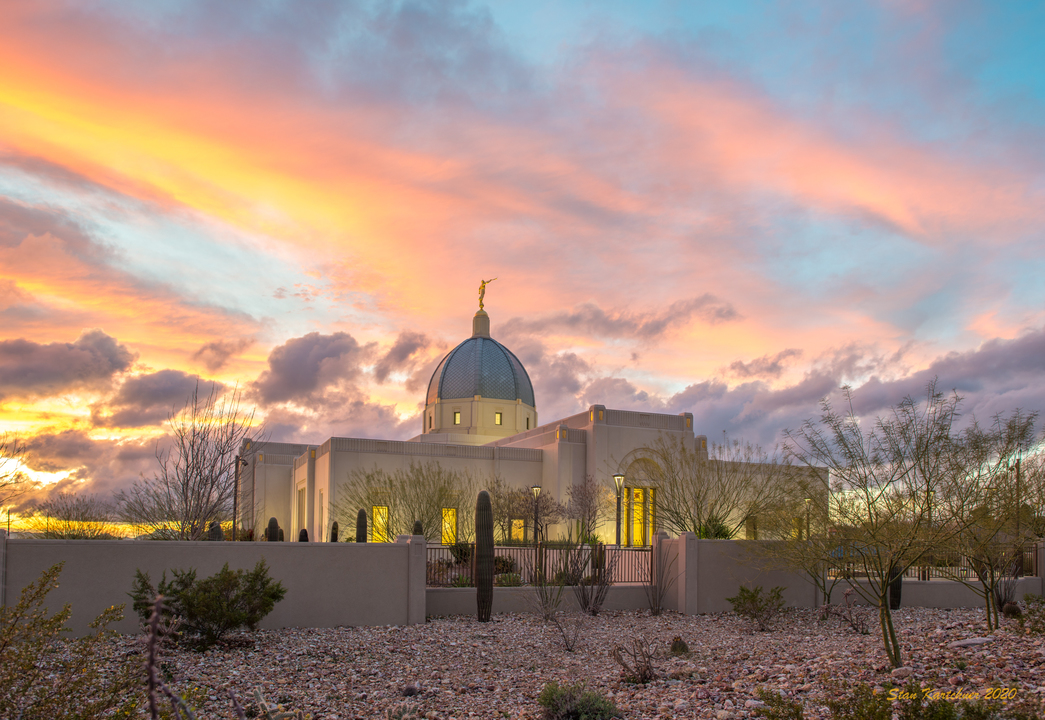 The Tucson Arizona Temple stands in the scenic Catalina Foothills north of Tucson in Arizona's Sonoran Desert. Influenced by its natural surroundings, the temple grounds are landscaped with red cactus flowers, ocotillo plants, and prickly pear cacti punctuated with small patches of grass near the gathering areas. A unique feature of the temple is the blue central dome, constructed of a zinc-based tile imported from Germany and capped by a lantern and a gold-leafed statue of the angel Moroni.

On October 6, 2012, President Thomas S. Monson announced plans for a temple to be built in Tucson, Arizona—the second largest city in the state—during his opening remarks of the 182nd Semiannual General Conference. There were approximately 400,000 members of the Church in Arizona.1

In February 2013, a Church project manager submitted preliminary plans to Pima County to propose making Church-owned property in the Catalina Foothills, where East Ina Road curves into Skyline Drive, the site for the Tucson Arizona Temple. The 7-acre site was purchased by the Church in 2010, and a residence to the north was subsequently acquired. The documents included surveys and environmental studies plus site and floor plans that used a rendering of a two-story, 34,000-square-foot mission-style building to represent the Tucson Arizona Temple. Plans proposed a 260-space parking lot with large areas of natural desert open space to provide a buffer for the surrounding neighborhood. No rezoning was required for the site, as it was already zoned to allow religious buildings.2

The Tucson Arizona Temple was originally designed with a 95-foot steeple, which would have required a special permit. However, plans were altered, and the steeple was replaced with a dome—reminiscent of the famous dome that crowns Italy's Florence Cathedral—that did comply with Pima County planning and zoning regulations.

President Dieter F. Uchtdorf, second counselor in the First Presidency, presided at the groundbreaking ceremony for the Tucson Arizona Temple on Saturday, October 17, 2015. Services were broadcast live to area meetinghouses in English and in Spanish. In his site dedicatory prayer, President Uchtdorf said, "We have come together with joyful hearts and with a feeling of overwhelming gratitude to participate in the groundbreaking for a house of the Lord. Please help us as we not only dedicate this piece of land but also rededicate our lives to Thee and Thy purposes as we prepare for the time when this new temple will be completed in all its beauty."3

A crowd gathered to watch the ascent of a 9-foot gold-leafed statue of the angel Moroni to the top of the Tucson Arizona Temple on Thursday, July 7, 2016. Family and friends of the construction crew were there and others arrived who wanted a closer look of the milestone event.4

More than 112,000 people toured the Tucson Arizona Temple during a three-week open house held June 3–24, 2017. Participants viewed a video and toured the interior of the sacred building including members of the local government and clergies.

On the evening before the dedication of the Tucson Arizona Temple, some 2,100 youth gathered to Kino Veterans Memorial Stadium to present the history of the Church in Arizona through song and dance in a cultural celebration themed "The Time is Now." President Dieter F. Uchtdorf encouraged the youth, "Start your own personal legacy in the church of Jesus Christ and in the gospel of Jesus Christ. Trust Him, because He loves you. He will help you wherever you go. He is your friend. He will give you direction and help whenever you need it."

On Sunday, August 13, 2017, the Tucson Arizona Temple was dedicated in three sessions by President Dieter F. Uchtdorf, second counselor in the First Presidency. In his dedicatory prayer, he asked God to accept and bless the temple: "Wilt Thou accept this Thy holy house as the gift of our hearts and hands. Wilt Thou honor it with Thy presence. May Thy Holy Spirit dwell here always and be felt by all who come within its portals. May a mantle of holiness come upon this sacred edifice. May it stand as a beacon of everlasting truth and light and as an invitation to come unto Thee."5

"For thou knowest that we have done this work through great tribulation; and out of our poverty we have given of our substance to build a house to thy name, that the Son of Man might have a place to manifest himself to his people."
—Doctrine & Covenants 109:5