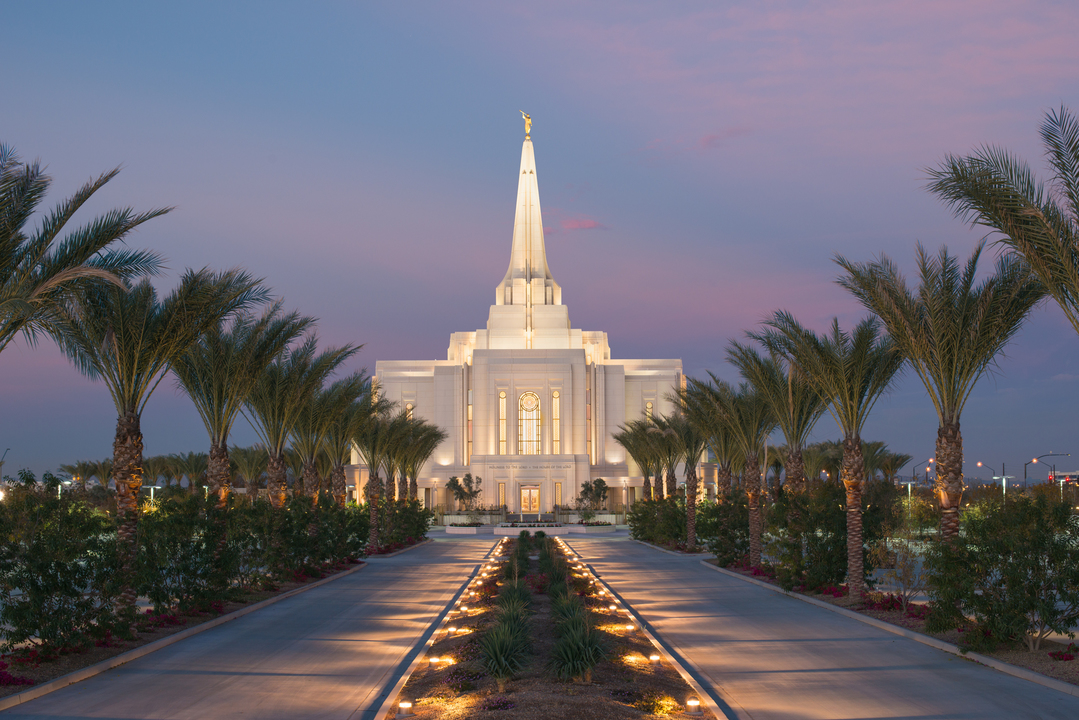 On May 15, 2012, hundreds of spectators gathered to the Gilbert Arizona Temple to witness the raising of the gold-leafed angel Moroni statue atop the single central spire. Numerous students, who attend a grade school across the street from the temple, gathered in the school parking lot that day with their families. As Moroni began his flight, a large group of middle school students created a spiritually poignant moment as they broke into song, singing the Primary favorite I Love to See the Temple.1

On Saturday, November 13, 2010, Elder Claudio R. M. Costa of the Presidency of the Seventy presided over the groundbreaking ceremony for the Gilbert Arizona Temple where thousands crowded on site to witness the first ceremonial shovelfuls of dirt. The temple is expected to be completed in approximately two years.

On Monday, September 22, 2008, just under 5 months from the time the Gilbert Arizona Temple was announced, Church representatives met with Town staff in a pre-application meeting to discuss the approval process for construction of the temple and a future meetinghouse.

On Wednesday, August 5, 2009, legal representative for the Church, Paul Gilbert, presented preliminary plans for the Gilbert Arizona Temple to the Town of Gilbert Planning Commission. He apologized that a final design review package had not yet been submitted and explained: "This temple is going to be a very unique temple. It won't follow the typical pattern and paragon that has been used in many of the other temples. It's designed to be a very special temple and, therefore, it is taking longer to do the details on coming forth with the building and what it will look like." He reassured the Commission, however, that the final design would be submitted "very shortly." For illustrative purposes, the Draper Utah Temple was used on the preliminary site plans.2 Overseeing the design is Gregory B. Lambright of Architekton—an architectural firm located in Tempe.3

The Planning Commission (watch video) discussed three requests put forth for a 21-acre parcel on the southeast corner of Greenfield and Pecos Roads that would permit construction of the 180-foot Gilbert Arizona Temple and a future adjoining meetinghouse. The requests included (1) a Minor General Plan Amendment to change the land use classification from Residential to General Commercial, (2) an ordinance to change the zoning from Single Family to General Commercial with a Planned Area Development Overlay, and (3) a use permit to allow a Large Scale Religious facility within a General Commercial zoning district. No formal action was taken by the Commission at this study session.4

The proposed PAD modifications—many of which stemmed from burial of unsightly utility lines—also included modifications intended to beautify the temple site including parking-lot-shielding berms, a 6-to-8-foot perimeter view fence, meandering pedestrian sidewalks, a collector street center median, and possible roundabout. The Church offered to shoulder the entire expense of the costly utility line project, an act which was heartily commended by Commissioner Chad Fuller.5

On Wednesday, September 2, 2009, the Planning Commission (watch video) held a hearing on the Gilbert Arizona Temple project. Public comment was made by just one citizen, who spoke in favor of the project. Following the hearing, the Commission carried motions recommending to the Town Council approval of the requested Minor General Plan Amendment, zoning classification change, and Conditional Use Permit (view staff report). Concept drawings presented to the public showed a temple with a single central spire rising 180 feet high with beautiful circular gardens flanking the north and south sides. A circular feature was also shown on the east side (or front side) of the temple, which terminated a strip of landscaping that stretched the length of the parking lot.6

On Tuesday, September 29, 2009, the Gilbert Town Council (watch video) unanimously passed the Minor General Plan Amendment, zoning classification change, and Conditional Use Permit necessary to permit construction of the temple. Nearly 70 citizens filed to speak in favor of the project, and no one filed to speak in opposition of the project. Although the design of the temple had not yet been finalized, concept drawings presented at the hearing helped to illustrate the height of the building, which was the main focus of the presentation by Paul Gilbert, legal representative for the Church. He defended the proposed height of the building and spire as consistent with nearby facilities—most notably the Mercy Gilbert Medical Center—and with other temples of The Church of Jesus Christ of Latter-day Saints, noting that it is an important expression of religious devotion, a symbol of reaching to heaven.7

On December 28, 2009, the deed transferring ownership of the temple site to the Church was recorded in the Maricopa County records.

On June 10, 2010, final plans went before the Town of Gilbert Design Review Board for preliminary evaluation of the development of a temple, accessory structure, and future meetinghouse. The five-level temple is described as 82½ feet tall with a spire reaching 195 feet, capped with a golden angel Moroni. The highly detailed ivory exterior will feature high quality pre-cast concrete and stone accentuated with fine rustications and beautifully crafted art glass windows. The floor plan includes a sub-basement for mechanical equipment; a basement for the baptistry; a first floor for the entry, dressing rooms, and administrative offices; a second floor for the chapel and endowment rooms; and a third floor for sealing rooms, waiting rooms, and a child care center. The wrought-iron fenced grounds will include fountains, shaded plazas, and lush landscaping featuring 10 kinds of trees, 5 palm varieties, and 24 species of shrubs, groundcovers, and vines with trellises, arbors and pergolas placed throughout the site.8

On July 15, 2010, the Town of Gilbert Design Review Board voted to approve plans for the Gilbert Arizona Temple. Approval was made subject to some minor changes that do not affect the overall design. Construction of a meetinghouse was also approved, which would likely be built within two to four years. The two structures will share a 658-car parking lot.9

The joint announcement of The Gila Valley Arizona Temple and Gilbert Arizona Temple was the first temple announcement made by President Thomas S. Monson after he became president of the Church in February 2008. "It is my personal priority to make sure members of the Church have access to the blessings of the temple," said President Monson. "It is here where members learn of their divine origin and destiny; where they are strengthened spiritually as individuals and as families. Temples are sanctuaries from the storms of life."10

During the month-long public open house of the Gilbert Arizona Temple, 407,020 guests toured the facility. Local media covered the event including a 30-minute prime-time special produced by one news station.

President Thomas S. Monson presided at the dedication of the Gilbert Arizona Temple, but at his request, the prayer in the first dedicatory session was offered by President Henry B. Eyring, first counselor in the First Presidency.