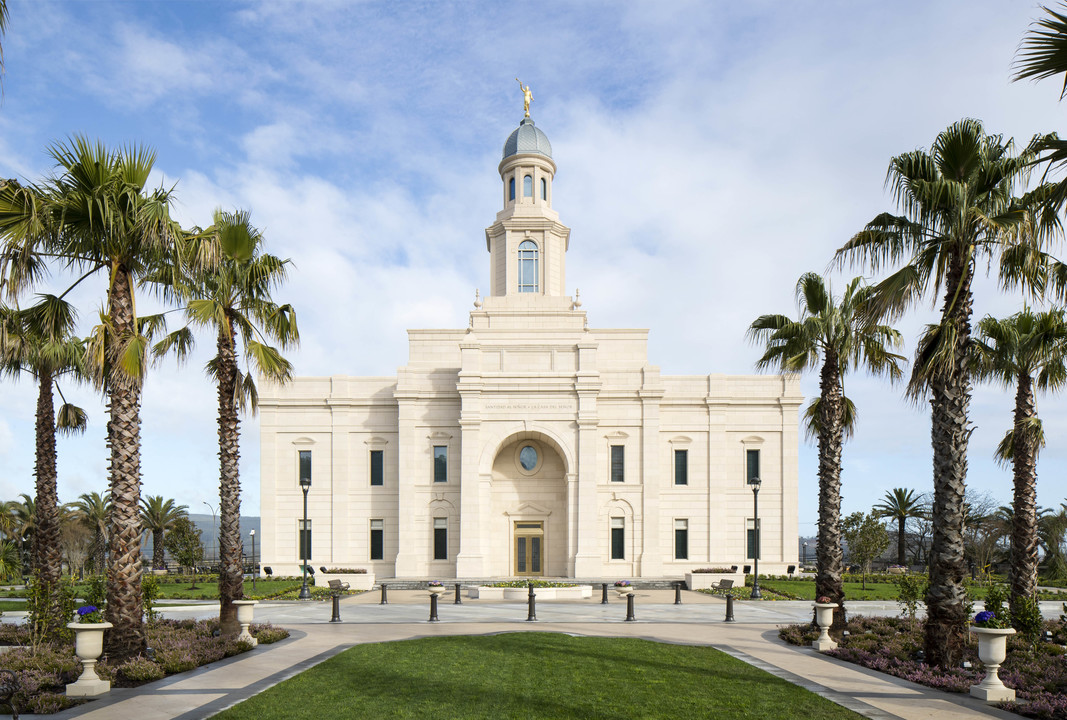 The Concepción Chile Temple is located in the residential development of Quinta Junge in a beautifully forested area next to the Biobío River. The temple is a breathtaking landmark, especially at night, on Avenida Pedro de Valdivia—the major thoroughfare that carries traffic through the south side of the city toward Southern Chile. An on-site patron housing facility provides a place for long-distance travelers to sleep during their stay. The lush, leafy grounds feature numerous palm trees and colorful flower gardens.

The Concepción Chile Temple was the second temple built in the country of Chile, following the Santiago Chile Temple (1983).

On February 27, 2010, a massive 8.8 earthquake struck off the coast of Chile just 62 miles north of Concepción, producing a a tsunami and a blackout that impacted 93 percent of the nation's population. In consideration of the high risk of seismic activity, the Concepción Chile Temple was constructed on a floating foundation. Such a foundation makes a 10-magnitude earthquake feel like a 2-magnitude earthquake to someone inside the temple.

The main window in the Celestial Room aligns with the setting sun as it drops behind the Biobío River, creating a heavenly atmosphere from late evening until sunset. As patrons are bathed in the natural light, the symbolism of the Celestial Kingdom, which is compared to the glory of the sun, feels even more real.

On October 3, 2009, Chilean Saints could not hold back their tears, cheers, and hugs of gratitude when President Thomas S. Monson announced the Concepción Chile Temple during the Saturday morning session of General Conference.

The Chilean news publication El Sur first broke news of the location for the Concepción Chile Temple on December 16, 2009, when it reported that a 2.5-acre site in Quinta Junge had been acquired by the Church as a portion of the property intended for the temple. A major apartment complex was already under construction on site with 40 percent of the apartments sold. As a result of the purchase, the housing contracts were cancelled and the partially constructed buildings were removed, leaving an empty field for several years until construction of the temple began.

A building permit was issued for the temple and its associated structures on January 25, 2013. Several lots had been combined to form the parcel for the temple complex. Later that year, another single-family home was acquired, which was razed in January 2015. The lot made the final addition to the temple property.

The official rendering for the Concepción Chile Temple was first publicly presented at priesthood leadership meetings held in the Concepción region in 2013. A member of the First Quorum of the Seventy revealed the rendering on April 17, 2013. And on November 10, 2013, Elder Jeffrey R. Holland of the Quorum of the Twelve Apostles presented both the exterior rendering and renderings of the interior, showing the artwork that was inspired by the Chilean landscape.

For several months prior to the groundbreaking for the Concepción Chile Temple, members organized service projects at the temple site to clear and prepare the land.

The groundbreaking ceremony was held on Saturday, October 17, 2015, with Elder Walter F. González, president of the South America South Area, presiding. The proceedings were broadcast live to area meetinghouses. "The temple is a place of instruction, revelation and covenants," said Elder González. Temples can help people understand their purpose in life and why things happen, he explained. "The temple can help us say, 'I am a disciple of Christ.'"1

During the month-long public open house of the Concepción Chile Temple, more than 83,500 guests were received, as noted by Mayor Alvaro Ortiz, who praised the Church as a good member of the community. "It extends its arms into places the state can't go…and totally makes a difference in neighborhoods that need it most." Regarding the temple, he said: "This temple is significant for the church and for Concepción, the most important city in southern Chile. It’s important to us to have it here."

The day before the dedication of the Concepción Chile Temple, President Russell M. Nelson met with more than a dozen local community leaders at the temple site to express his gratitude. Jacqueline Van Rysselberghe, a former mayor of the city, said: "It's an enormous honor to have this temple in our city." She added: "I have found that members of the Church are always willing to come forward and serve other people. The beauty of this temple represents the beauty of the souls of the Church's members." That evening, President Nelson spoke to a gathering of 1,500 young men and young women at a youth devotional, which was broadcast to 28,000 youth in the temple district.2

President Russell M. Nelson dedicated the Concepción Chile Temple on Sunday, October 28, 2018, as the 160th operating temple of The Church of Jesus Christ of Latter-day Saints. He was accompanied by Elder Gary E. Stevenson of the Quorum of the Twelve Apostles. "Today just felt absolutely heavenly," said Elder Stevenson in an interview following the dedication. "It was punctuated by the spirit and the people and their preparation spiritually."3

As with many of the significant religious and secular 19th century building of Chile, the design of the Concepción Chile Temple is neoclassical with subtle French detailing. The temple is capped with a dome, as are most Chilean religious buildings. Precast concrete has been used on the exterior walls, simulating the faux limestone stucco used in other historic architecture of the region.

The Biobio region of Chile experiences high seismic activity with massive earthquakes ranging from 7.8 to 8.8 every 20-30 years. This required significant attention during the design process. A state-of-the-art base isolation system was incorporated. There are 22 “pendulum” type base isolators supporting the temple, allowing it to move 30 inches (75 cm) in any direction, for a total displacement of 60 inches (150 cm). There are also eight “vicious dampers” (2 per corner) acting as shock absorbers to slow the rate of building movement down during a seismic event. Flexible connections were also used for all utilities.

The landscape design takes cues from classic gardening, with a plant palette focuses on native Chilean species. There are 96 palm trees on the site, including many Chilean Palms which were originally found on the site, and have been preserved and incorporated back into the gardens. Several Araucaria (Chilean Pine) were also saved and re-established in the new landscaping. Views to the nearby Biobio River are highlighted with elevated pathways on the west side of the temple.

Motifs of the Chilean national flower, the Copihue, are found on various details throughout the temple. They can be seen in the art glass panels, flooring, and bronze railing details. The Copihue flower is found throughout southern Chile, primarily in the rain forest regions.

The art glass throughout the temple reflects traditional patterns as well as the Copihue flower. Colors used in the art glass are gold, green and lapis lazuli blue. The beautifully designed windows fill the grand stairway and other areas with light.

The Chilean national stone, deep blue lapis lazuli, is used in the baptistery font design and in the stone floor details. Lapis Lazuli is mined in the Andes Mountains of Chile. This semi-precious stone is an elegant accent skillfully incorporated in the detailing throughout the project.

The principle stone used in flooring is Beige St Michel limestone, quarried and carved in Portugal. The accent stone is composed of Crema Marfil marble, quarried and prepared in Spain. Highlight accents are of native Chilean Lapis Lazuli. Custom carpets, including hand carved pieces, have been crafted in California, New Zealand, and Thailand.

Details in the temple’s trim and moldings were inspired by classical design. The principle hardwood is Sapele Mahogany from Africa, which was prepared in Argentina.4