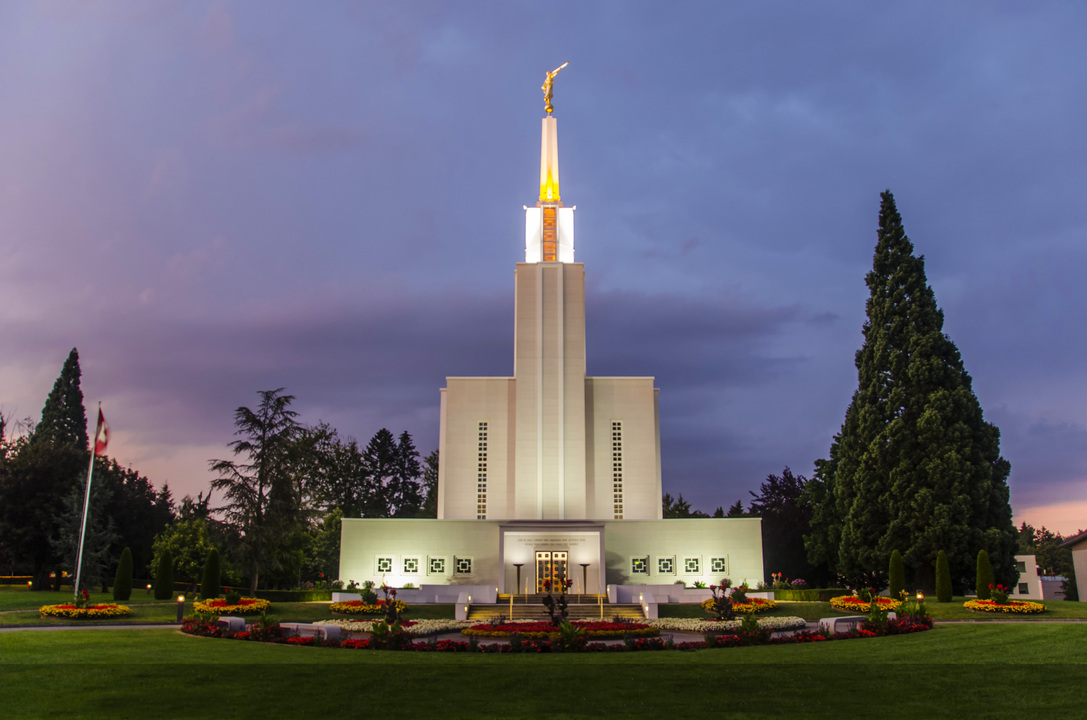 Situated in the village of Zollikofen, the Bern Switzerland Temple stands on a gently sloping hill at the edge of a well-tended national forest. To the south is the capital city of Bern, the meandering Aare River, and the famed Swiss Alps. The temple is easily accessible—just a four-minute walk from the Zollikofen railroad station and street car terminal.

The Bern Switzerland Temple was the first "overseas" temple built by the Church.

The Bern Switzerland Temple was the first temple to use film presentation of the endowment ceremony.

The Bern Switzerland Temple was the first temple where English would not be the predominant language.

The Bern Switzerland Temple was originally named the Swiss Temple.

The Bern Switzerland Temple is a sister building to the Hamilton New Zealand Temple.

The Bern Switzerland Temple was originally constructed with a single 250-seat, auditorium-style ordinance room equipped with motion-picture presentation of the endowment.

President David O. McKay dedicated the Bern Switzerland Temple in the first of ten dedicatory sessions on September 11, 1955, at 10:00 a.m.

In 1992, the Bern Switzerland Temple was formally rededicated following an extensive remodeling project that completely updated the interior and added additional endowment and sealing rooms.

In 2005, a statue of the angel Moroni was added to the spire of the Bern Switzerland Temple in commemoration of its 50th anniversary.

The Swiss Mission was created on November 24, 1850. Elder Lorenzo Snow of the Quorum of the Twelve, who had been laboring as a missionary in Italy for several months, set apart one of his companions, Thomas B.H. Stenhouse, as the mission's first president.1

Prophecies of international temples were made as early as August 1906, when President Joseph F. Smith visited Zurich, Switzerland, and predicted that "the time would come when temples to the Most High would be built in various countries of the world." Only four temples were in operation at the time—all in Utah.2

President Heber J. Grant pronounced a similar prophecy in 1923 at the dedication of the temple in Cardston, Alberta: "I have no doubt in my mind that temples of the Lord will be erected in Europe, none whatever. How soon that will come I do not know. It will not come until the spirit of peace has increased among the people of Europe." World War II ended in Europe in 1945, and the temple was dedicated just ten years later.3

President David O. McKay approved a site for the temple in the summer of 1952 and placed President Samuel E. Bringhurst of the Swiss-Austrian Mission in charge of procuring the property. Investigation disclosed 30 heirs with interest in the property, resulting in time-consuming negotiations. During a sleepless October night, President Bringhurst felt there may be a reason for the delay. He held a mission-wide fast for a resolution, and the property was withdrawn the next day. Although a little disappointed, the decisive action was a wonderful testimony to all.

President Bringhurst rejoined his real estate agent and found three more sites, though one became unavailable soon after. "I prayed earnestly for guidance," he wrote, "and accompanied by Mrs. Bringhurst, drove back to decide between the remaining two properties. The one considered choice number two the day before, now seemed to be more desirable?.[As] we walked over it, all doubt seemed to leave and we felt certain we were on the site the Lord wished for the first European temple." After purchasing the site, it was learned that the elevated portion of the previously desired site was being taken for a state highway.4

In the fall of 1953, President McKay gave a special charge to Gordon B. Hinckley: "I want you to find a way to present the temple instruction in the various languages of Europe while using a minimum number of temple workers." The monumental task had a two-year time limit and was to run concurrent with his responsibilities in the Missionary Department. Tremendous study and prayer lead to his recommendation that the sacred ceremony be filmed in its various languages, leaving the challenge of production. The priesthood assembly room of the Salt Lake Temple was temporarily converted to a production studio. A full year was required to produce the film in English, followed by new casts and translations for 7 additional languages.

Once production was finally finished, transportation of the sacred films became the next concern. In Basel, the customs agent asked Brother Hinckley what the small drums he carried contained. "Church film and lectures," he responded. The agent explained that the films must be transported to Bern for approval by the federal film board. Sensing he should not draw undue attention, Brother Hinckley reluctantly surrendered the canisters. A day of fasting and pleading followed. Early Monday, Brother Hinckley and President William F. Perschon of the Swiss-Austrian Mission reported to customs. In the federal film board office, the officer in charge directed a number of questions. Later, President Perschon reported that "a friendly understanding seemed to come over [the officer]." In unusually cooperative manner, the papers were stamped and films released without anyone seeing a frame or hearing a word.5

To accommodate those who had traveled long distances, temple ordinances commenced at 5:00 a.m. the day following the dedication. By 9:00 p.m., 22 sessions had been held for 900 members including 79 living endowments, 17 living couple sealings, and 21 living children-to-parents sealings.6

In 1990, the temple was closed for extensive remodeling and refurnishing, reopening 2½ years later following an open house and rededication. Dozens of languages surrounded the reopening events, yet a sense of unity prevailed in the temple where children of God experienced His peace together, despite ethnic background, country of citizenship, or political view. One such juxtaposition was a bus of 42 Croatian and 7 Slovenian members from divided Yugoslavia who sat together as one in Christ. Those members who traveled the farthest were assigned to the last day of rededicatory services, enabling them to perform ordinance work the next day.7

On September 7, 2005, a statue of the angel Moroni was installed atop the Bern Switzerland Temple in honor of the 50th anniversary of the first temple in Europe. A commemorating conference convened in a nearby stake center three days later, presided by Elder Bruce C. Hafen of the Seventy, a descendant of Swiss convert John G. Hafen. Faith-promoting stories were recounted of the bold and historic events leading to the dedication of the temple—a milestone moment in the internationalization of the Church.8