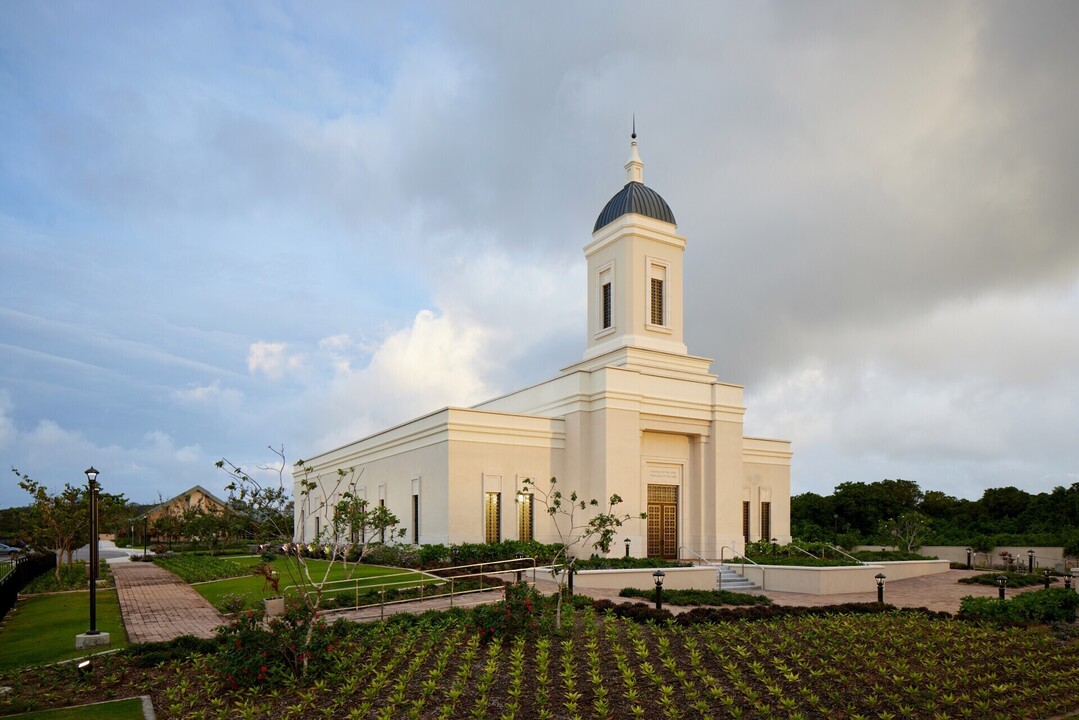 The cream-colored walls and stately tower of the Yigo Guam Temple rise over Marine Corps Drive (Guam Highway 1) at its intersection with Milalak Drive in the northern village of Yigo where the Andersen Air Force Base is located. A meetinghouse stands behind the temple, housing a distribution center and an arrival center for the convenience of members and patrons. The grounds are full of tropical plants and trees in the plentiful garden spaces.

The Yigo Guam Temple was the first temple built in the Micronesia islands (and in the territory of Guam).

The first stake in Guam was organized on December 12, 2010, by Elder L. Tom Perry of the Quorum of the Twelve Apostles.

The Yigo Guam Temple was built on the site of an existing meetinghouse. The church building was demolished to make way for the temple and a replacement meetinghouse.

The groundbreaking ceremony for the Yigo Guam Temple was held on the same day as the groundbreakings for the Praia Cape Verde Temple and the San Juan Puerto Rico Temple.

The Yigo Guam Temple was among a pioneering group of temples designed to offer more flexibility in temple spaces. Near the dressing areas, small enclosures function as both name booths and initiatory booths. Elder David A. Bednar further explained, "For example, the new temple in Guam has two rooms that can function as instruction rooms or sealing rooms, depending on what is needed on a given day. That flexibility allows for the right ordinances to be available at the right time for Church members."1

On October 7, 2018, President Russell M. Nelson announced plans to construct the Yigo Guam Temple at the October 2018 General Conference. It would be the first temple constructed in the islands of Micronesia. The temple would be a tremendous blessing to Church members in the western Pacific who belonged to the Manila Philippines Temple, located about 1,550 miles (2,500 km) west of Guam.

On February 1, 2019, the official exterior rendering for the Yigo Guam Temple was released to the public. It depicted a two-toned exterior with a domed steeple rising over the entrance.

On Saturday, May 4, 2019. Elder Yoon Hwan Choi, president of the Asia North Area, presided over the groundbreaking ceremony for the Yigo Guam Temple. "Temples are not just buildings," he said. "A temple is a university for us to learn how to return to Heavenly Father." Elder Kazuhiko Yamashita asked the audience, "What will you engrave in your heart today to celebrate the groundbreaking of the Yigo Temple?" He answered, "I engrave in my heart my commitment to serve the Lord."2

Prior to the dedication of the Yigo Guam Temple, guests were welcomed during an eleven-day open house that was held from May 4–14, 2022.

A youth devotional was held the day before the dedication of the Yigo Guam Temple. Elder David A. Bednar and his wife, Susan, participated in a group discussion with youth from Guam, Palau, Saipan, Yap, Pohnpei, Chuuk and Kosrae. "Please always connect the Savior to the word 'temple,'" said Elder Bednar. "Everything starts with Christ. Then come the covenants and ordinances, and the covenants and ordinances are received in the temple."3

Elder David A. Bednar dedicated the Yigo Guam Temple on May 22, 2022. He said at the cornerstone ceremony, "We come to the temple to receive and review the covenants and ordinances for the express purpose of having them written in the fleshy tables of our hearts." In his dedicatory prayer, he blessed members with gifts saying, "We especially are grateful for the faithfulness of Thy Saints from this temple district and from all around the world—and for their tithes and offerings that have made the construction of this temple possible. Please bless them, Father, and open the windows of heaven and shower down upon them every needful gift."4

The design of the Yigo Temple is deliberately simple and understated. While the form is reminiscent of religious and community buildings in the region, the temple retains the essence of local vernacular with hints of proportions derived from the ancient latte stones found in the area. This is subtly expressed by the piers or front flanking columns of the entry. A latte is comprised of two stones—the shaft stone, called the “haligi,” and the rounded capstone, called the “tasa.” Remnants of these latte stones come from the Chamorro culture, which was spread across Guam, Saipan, Rota, and Tinian.

The form of the temple features an end-tower over the front entry facing east. There is a beautiful blend of a natural Portuguese limestone called Moleanos, which accents the lower watercourse as well as the window and door surrounds and the parapet details. This gives the temple a clean, contemporary style with classical proportions. A beige hand-troweled stucco makes up the body of the temple and blends nicely with the limestone.

Decorative grillwork provides pattern, interest, and shadow-play on the windows of the temple. Zinc-coated metal roofing covers the dome on top of the spire.

Located on the northeastern portion of the island of Guam, the temple is adjacent to Anderson Air Force Base and is surrounded by lush tropical trees. The landscaping also includes more than a hundred shade and flowering trees as well as hundreds of decorative shrubs.

Like the exterior, the temple interior is simple and restrained. Design elements are based on a traditional approach. Decorative paint and restrained use of art glass provides a simple play of organic leaf patterns to accent the ordinance rooms.

Hard surfaces of tile and stone are used throughout the temple. Beautiful area rugs soften key spaces but can be removed easily for cleaning and will avoid the potential for moisture retention that would occur in fully carpeted spaces.

The baptistry incorporates a unique, artist-designed, three-dimensional bas-relief panel depicting the oxen in this room. The font is unique, providing an intimate experience for those participating.5

"And daily in the temple, and in every house, they ceased not to teach and preach Jesus Christ."
—Acts 5:42