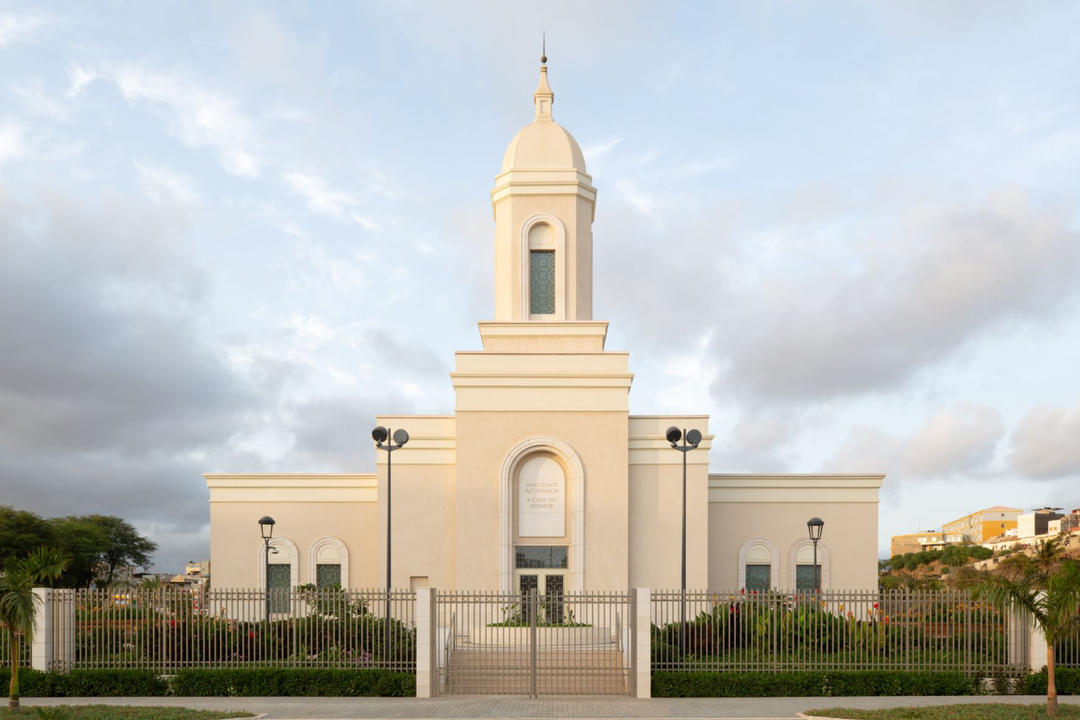 The Praia Cape Verde Temple stands in the national capital city in the old town center known as "Plateau," adjacent to the National Library of Cape Verde on the east side of Avenida Cidade de Lisboa in the Tahiti Chã de Areia neighborhood of Praia. A meetinghouse shares the temple site, surrounded by formal grounds teeming with tropical plants and flowers. A lovely circular planter sits at the entrance doors, and gathering plazas flank either side of the building.

The Praia Cape Verde Temple was the first temple built in the Macaronesia islands (and in the country of Cape Verde).

The first stake in Cape Verde was organized in Praia on April 29, 2012, by Elder Erich W. Kopischke, president of the Europe Area.

On October 7, 2018, President Russell M. Nelson announced plans for the construction of the Praia Cape Verde Temple during his closing remarks at the 188th Semiannual General Conference. Since 1994, when Elder Dallin H. Oaks dedicated the ten-island nation not far from where the temple would be built, Church membership had grown significantly in Cape Verde where some 14,700 Latter-day Saints were organized into three stakes and two districts. A temple in Praia would make the sacred ordinances of the temple an attainable blessing for Church members who belonged to the Madrid Spain Temple district and would soon be transferred to the Lisbon Portugal Temple district.1

On February 8, 2019, the official rendering of the Praia Cape Verde Temple was released to the public. It depicted a two-toned exterior with a domed steeple rising over the entrance, reflective of local architectural styles.

On Saturday, May 4, 2019, Elder Paul V. Johnson, president of the Europe Area, presided at the groundbreaking ceremony for the Praia Cape Verde Temple. He explained the significance of the construction of a temple in the country: "For Cabo Verde's faithful sons and daughters the blessing of having a temple of the Lord in their own country is a powerful reminder of the Lord's promise in the Book of Mormon that He remembers His children upon the isles of the sea."2

On the eve of the dedication of the Praia Cape Verde Temple, Elder Neil L. Andersen of the Quorum of the Twelve Apostles delivered a three-fold message to the youth of the temple district: "We love you. We need you. We promise you." The devotional was held in the new meetinghouse next to the temple where two earlier meetings had been held that day. A meeting with the full-time missionaries of the Cape Verde Praia Mission was held in the morning, and a meeting with the long-time local (or "pioneer") members was held in the afternoon.4

The Praia Cape Verde Temple was dedicated by Elder Neil L. Andersen of the Quorum of the Twelve Apostles on Sunday, June 19, 2022. At the cornerstone ceremony, he said that "in the records of heaven, this is one of the most important days for Cabo Verde in the whole history of the world." He blessed the island country in his dedicatory prayer saying, "Finally, Father, we pray for this beautiful Republic of Cabo Verde. May this temple bring a richness of blessings to all the country. May the light of this temple be a reminder to all that Thou art our Father, that we are Thy sons and daughters, that Thy Son is our Savior and Redeemer, and that our lives have great purpose. As the waters of the sea border this land, may Thy Spirit surround these islands, Santiago, São Vicente, Santo Antão, Fogo, Sal, São Nicolau, and all others, and may Thy restored gospel grow and expand."5

"Let us truly be a temple-attending and a temple-loving people….Let us make the temple, with temple worship and temple covenants and temple marriage, our ultimate earthly goal and the supreme mortal experience."
—Howard W. Hunter