Preparing for public open house beginning 1 December 2022; scheduled to be dedicated on 15 January 2023 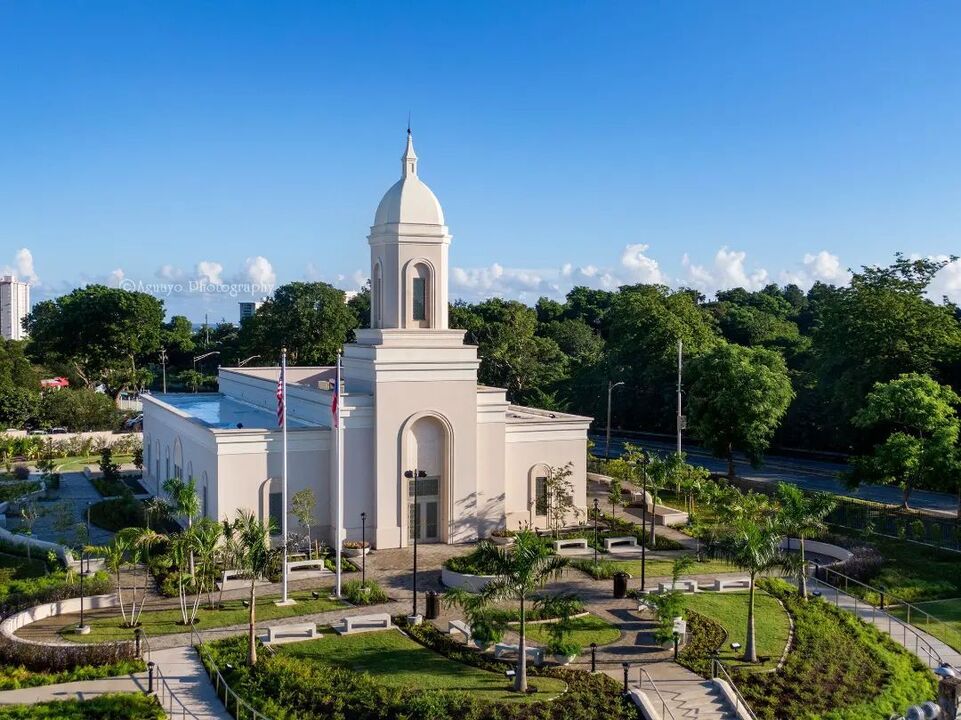 The First Presidency has announced that the public open house for the San Juan Puerto Rico Temple will be held from Thursday, December 1, through Saturday, December 17, 2022, with no tours held on Sundays. Elder D. Todd Christofferson of the Quorum of the Twelve Apostles will dedicate the temple in three sessions on Sunday, January 15, 2023. The dedicatory sessions will be broadcast to all congregations in the future temple district.1

Elder Walter F. González, president of the Caribbean Area, presided at the groundbreaking ceremony for the San Juan Puerto Rico Temple on Saturday, May 4, 2019. "Without a doubt," he said, "this is a day to remember, a day that we will keep in our memories and in which the longing of so many brothers and sisters of this beautiful Island of Enchantment becomes reality." Elder González encouraged the Saints to build the temple first in their hearts.2 President Wilfred Rosa, president of the San Juan Puerto Rico Stake, spoke to a visibly touched congregation as he recognized the sacrifices of the Saints who have longed for a temple in their own country. "I'm happy because we can finally hear the sound of the coquí (frog) when we leave the House of the Lord," he said.3

On January 20, 2019, the Trujillo Alto Ward chapel was permanently closed for demolition.

The official rendering of the San Juan Puerto Rico Temple was publicly released on January 12, 2019. The rendering depicts a domed spire that will rise over the temple entrance, honoring the Spanish colonial architecture found throughout historic Old San Juan including the iconic defensive castle known as Castillo San Felipe del Morro or simply "El Morro."

The San Juan Puerto Rico Temple and an ancillary building will be constructed on the site of the existing Trujillo Alto Ward chapel next to the Expreso Trujillo Alto highway, providing good access and a central location to the San Juan metropolitan area. The property has long been a hub of Church activity on the island, as the building just west of the chapel once housed the offices for both the Puerto Rico San Juan Mission and the Caribbean Area. The building is now part of an educational complex known as The School of San Juan.

The Caribbean's third temple was announced for the island of Puerto Rico by President Russell M. Nelson on October 7, 2018, just over a month after President Nelson traveled to the island for a member meeting held at the Coliseo de Puerto Rico arena. During his remarks, he expressed his admiration for the Puerto Rican Saints who gave service and remained faithful during the awful months that followed the devastation of Hurricane Maria in September 2017. Puerto Rican member Anali Ojeda said, he "taught us today that we could find peace during difficult times through Christ." She emphasized, "That's how we overcame this past year, through Christ."4

The San Juan Puerto Rico Temple will make regular temple attendance a reality for Puerto Rican Church members and spare them the time and expense of traveling by plane to the Santo Domingo Dominican Republic Temple. There are over 23,000 Latter-day Saints on the island organized into five stakes.5

The San Juan Puerto Rico Temple will be the third temple built in the Caribbean, following the Santo Domingo Dominican Republic Temple (2000) and the Port-au-Prince Haiti Temple (under construction).

"Each [temple] stands as a beacon to the world, an expression of our testimony that God, our Eternal Father, lives, that He desires to bless us and, indeed, to bless His sons and daughters of all generations."
—Thomas S. Monson