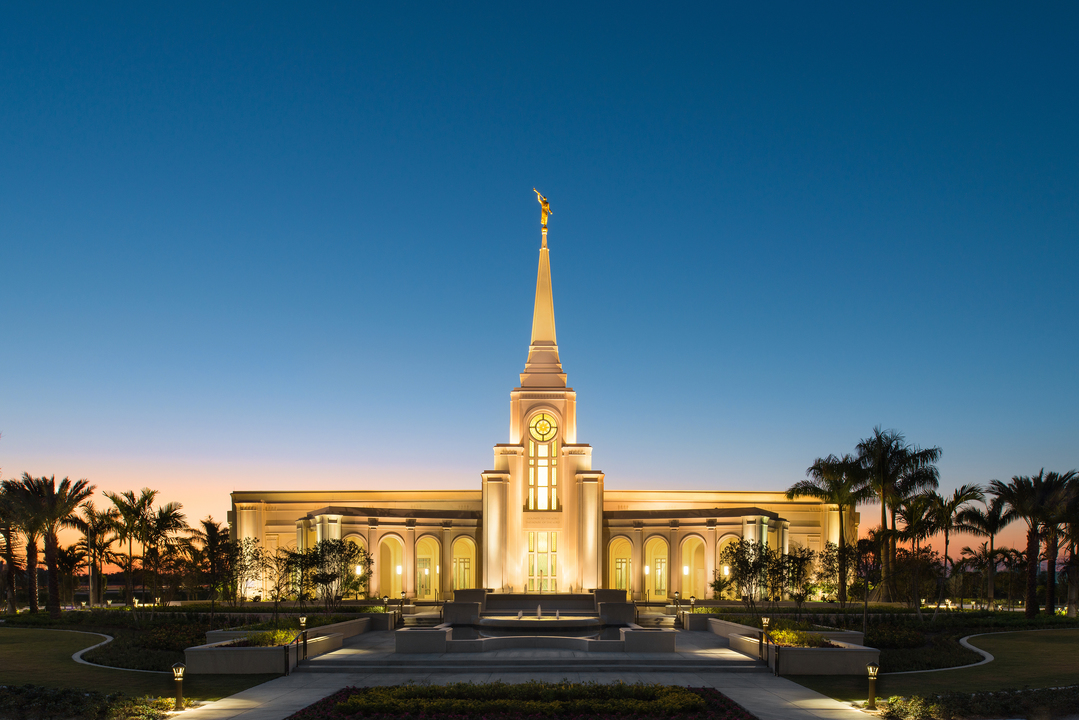 On October 24, 2012, the construction of the Fort Lauderdale Florida Temple reached a major milestone with the installation of the angel Moroni statue atop the spire.

In May 2010, Church representatives submitted a master planned site plan to the Town of Davie for the Fort Lauderdale Florida Temple and a bordering 13-lot residential development of one-acre equestrian lots named Shotgun East Estates.

On June 10 and 14, 2010, public participation meetings were held for neighbors living within a 1,000-foot radius of the property. Discussion focused on the operation of the temple, clarifying that it would not be a "worship center" and that there would be no school, daycare, restaurant, or lodging facilities on site. Traffic concerns were allayed as attendees came to understand that the temple would function for small-scale ceremonial and educational activities only—a welcomed contrast to the previously proposed middle school for the site. The main concern was height and lighting of the temple spire so that it did not appear to loom over the community. The Church agreed to prepare a site line view from the middle of the adjacent Riverstone development.

On October 27, 2010, plans were presented at the Board of Commissioners Meeting of the Central Broward Water Control District. This organization reviews proposed drainage and retention plans and gives approval prior to final site plan approval.

In reviewing plans for the project, staff offered the following recommendations: (1) Change the proposed 6-foot high masonry wall to a fence material that is consistent within the rural lifestyle, green or black chain-link fence. (2) Relocate the house of worship building as far to the west as possible, and relocate all proposed bodies of water at the eastern portion of the site, as far as possible from any existing residential use. (3) Utilize the code provision that allows up to 25 percent grass parking for houses of worship in order to reduce the amount of concrete surface areas. (4) Remove the sidewalk adjacent to both drop-off areas; it appears to be in conflict with both pedestrian and vehicular movement patterns. (5) Add features to the utility building consistent with the architectural. (6) Relocate one Bischofia, two pond apple trees, four existing live oaks and five queen palms onto the Latter-day Saints Temple development. (7) Meet the specified conditions for proposed drainage easements within the residential lots.

On November 9, 2010, plans were presented to the Town of Davie Site Plan Committee. A motion carried to recommend project approval subject to the following comments: (1) that this is subject to staff recommendations numbers one, four, five, and seven (above), and in lieu of recommendation number six, the applicant will mitigate to the tree fund; (2) on the residential plan, on lot number one, there would be no driveways closer than 125-feet from the eastern property line of lot number one, and there will be no driveways on lots 13 and 10 onto the main entrance road, but the driveways will access off the cul-de-sac street; (3) a landscape island will be installed in each cul-de-sac with landscaping to be determined by staff and applicant subject to the restrictions which may be placed on it by the utilities on the cul-de-sacs; (4) on the temple site, there will be no lighting on the building above 52 feet and all lighting will be subject to Code and Night Sky Ordinances; (5) the applicant will add sidewalk textured materials to connect the sidewalks and the driveways; and (6) the applicant will relocate the sidewalk that leads to the drop-off area to the landscape island which is south of that sidewalk.

On January 26, 2011, the Town of Davie Planning & Zoning Board was presented the plat for Shotgun East Estates and held a public hearing on three requests submitted by legal representatives, John D. Voigt and C. William Laystrom, and by current owner, GL Homes of Davie Associates IV, Ltd. The requests included (1) the vacation of the plat recorded by GL Homes on December 10, 2003, (2) the rezoning of the residential portion of the property from Community Facility to Agricultural District, and (3) a variance to increase the maximum allowable building height from 42 feet to 116 feet to accommodate the temple spire.

On February 16, 2011, the Town Council (view video) considered numerous requests related to the approval of the temple and Shotgun East Estates:

During the public hearing, a resident of the Riverstone development kindly reminded Church representatives of commitments made to the neighborhood including traffic routing, maintenance of the empty land, and lowering the steeple from 115 to 100 feet. A member of the Council commended the Church for its cooperation, which had made the neighborhood very happy. As a gesture of good will, the Church agreed to purchase and install a streetlamp at the roundabout entrance to the neighborhood within 60 days. The ordinances were approved without dissent, and the mayor said with a smile, "Welcome to Davie!"

On March 2, 2011, final Town Council approval for the Fort Lauderdale Florida Temple was received at a public hearing where a vacation ordinance and rezoning ordinance were given a required second reading. These ordinances had been approved at their first reading on February 16, 2011, along with numerous other related requests.

On April 7, 2011, a Special Warranty Deed was recorded by Broward County, which officially transferred ownership of the temple site from G.L. Homes of Davie Associates IV, Ltd. to the Corporation of the Presiding Bishop of The Church of Jesus Christ of Latter-day Saints.

The Fort Lauderdale Florida Temple is a 28,000-square-foot building described in application materials as "an interpretation of Neoclassicism with arches, columns and a steeple." The temple will feature a sun and palm tree motif with beautiful murals in the first-stage endowment room, inspired by local landscapes.

On Sunday, May 30, 2010, the location of the Fort Lauderdale Florida Temple site was disclosed at special stake firesides held in South Florida as a 30-acre triangular parcel in Davie, located at the south end of SW 154 Avenue (Shotgun Road), just north of the interchange of Griffin Road and Interstate 75. The Robbins – Vista View Trail borders the property along Shotgun Road, accommodating leisure activities to and from the site and providing access to numerous parks and other trails.

The prior developer of the site had platted the parcel as Shotgun East, which was approved by the Town Council on February 5, 2003, for a 240,000-square-foot middle school. Broward County code requires developers to provide for the educational needs of the future residents of their developments. So, when GL Homes of Davie Associates IV, Ltd. platted nearby South Post Plat, a 308-unit development, compliance with the code came in the form of platting Shotgun East, rezoning the land from A-1 (Agricultural) to CF (Community Facility), and executing a use agreement with the Town of Davie to restrict use of the site to a public school.

By 2009, the School Board had yet to devise plans or secure funding for the school, and the Church had come forward as an interested buyer in the property. Therefore, in accordance with the terms of the contract, the owner opted to deliver a Notice of Termination to the School Board on October 30, 2009, and to pay the required educational impact fees so that the property could be sold to the Church. An amendment to the use agreement was delivered to the Town of Davie requesting that the use restriction be removed, CF zoning be retained for the temple, and A-1 zoning be reinstated for the residential development.

On October 3, 2009, President Thomas S. Monson announced that Florida's second temple would be built in the area of Fort Lauderdale in southeastern Florida. The new temple will serve members living in South Florida and the Bahamas. Members in this region currently travel to the Orlando Florida Temple to participate in the Church's highest ordinances.1

The Fort Lauderdale Florida Temple was named the ENR Southeast's "Best Projects" award winner for 2014 in the Cultural/Worship category.