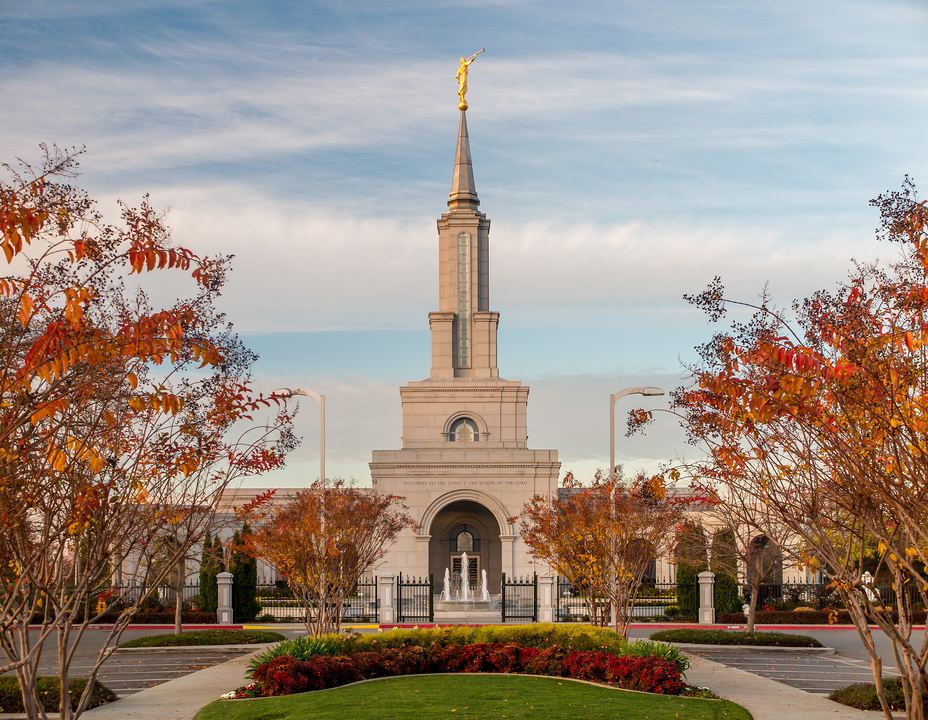 The Sacramento California Temple shares a large parcel of Church-owned property with a meetinghouse in the Folsom California Stake overlooking Lake Natoma. Located off Highway 50 in Rancho Cordova, 20 miles east of Sacramento, the site was once owned by Aerojet General Corp. for use as a recreational center. During a large downsize of the company in 1971, the Church acquired the 47 acres where a chapel was built onto the existing gym and other areas converted to classrooms. It provides for numerous church activities including sand volleyball, picnics, camping, and ward group activities. The beautiful piece of property is on a hill overlooking the foothills of the Sierra Nevada Mountains. The majestic oak trees surrounding the site create a serene natural setting.

The public open house of the Sacramento California Temple was attended by 168,367 visitors.

Having made the drive to the Oakland California Temple for many years, northern Californians were elated to receive the announcement that a temple would be built in their state capital of Sacramento. Excitement turned to speculation as members awaited the announcement of a site location. Suspense was put to rest 8 months later, on Friday, December 21, 2001, when the First Presidency disclosed the Rancho Cordova site.1

Plans for Sacramento originally called for a larger temple, but those plans changed in the fall of 2002 when the decision was made to adapt the successful floor plan used for the recently constructed Redlands California Temple and Newport Beach California Temple. The change in size reduced the estimated maintenance costs to approximately 1/10 the original costs.2

On August 14, 2003, the 11-member Rancho Cordova Community Planning Advisory Council voted unanimously to recommend the county's approval of the proposed temple. Before casting his vote, council member, Frank McCarthy, expressed his support for the Church, which is willing to clean up "the ugliest stretch of Highway 50." Opponents, on the other hand, feared the adverse effects of illuminating the building at nights (5 a.m. to dawn and dusk until 11 p.m.), specifically the 131-foot spire, which the Church agreed to lower 20 feet from its originally proposed 151-foot spire. Members of the Lake Natoma Community Task Force said the spire would negatively impact views; others claimed that the lighting would attract birds, causing them to fly endlessly around the spire until possibly colliding with the building. Proponents noted that the nearby lighted Folsom Automall and the car lights along Highway 50 would far outdo the proposed lighting of the temple. Principal engineer, Brian Everett, explained that a precedent on area lighting was set when the automall was constructed. "The temple's light will not flash, blink nor glare," he said, explaining the controls that would restrict excess light. Church members pointed out the community benefits of temples, which attract visitors and increase revenues for local businesses.3

Sacramento County adopted a Negative Declaration for the Use Permit, which dismissed the requirement to prepare an Environmental Impact Report. The declaration was open for public comment during a review period that began October 24, 2003, and ended November 13, 2003. The Use Permit was a request to allow operation of the existing meetinghouse and to add the 17,500-square-foot temple, distribution center, and two caretaker residences.4

On March 22, 2004, the County of Sacramento Project Planning Commission approved the Use Permit for the temple in a unanimous 3-0 vote.5 The three Commissioners (two of the five being absent) heard extensive testimony from both proponents and opponents of the project. Arguments centered on the Commissioners' concerns over the steeple's height, mass, and lighting. County staff noted that within the county zoning ordinances, no height limit is imposed on church steeples. Satisfied that opponents did not demonstrate a basis for imposing such a limit, no change to the temple was requested. The Commissioners were similarly pleased by a photograph of the soft, nighttime lighting used by the Redlands California Temple. To ensure that the illumination would not be switched for harsher lighting in the future, however, the Commissioners asked whether the Church would agree to a maximum-illumination clause (4 foot-candles max. on the building and 9 on the steeple) as condition for approval of the Use Permit. The Church agreed. At the conclusion of discussion, the feeling among those present was that of appeasement.6

President Gordon B. Hinckley presided at the groundbreaking ceremony held on Sunday, August 22, 2004. He was joined by local LDS politicians including Congressman John Doolittle and Mayor "Rocky" Rockholm. The ceremony was broadcast via closed-circuit television to numerous meetinghouses throughout northern California.7

"The Lord is in his holy temple, the Lord's throne is in heaven: his eyes behold, his eyelids try, the children of men."
—Psalms 11:4