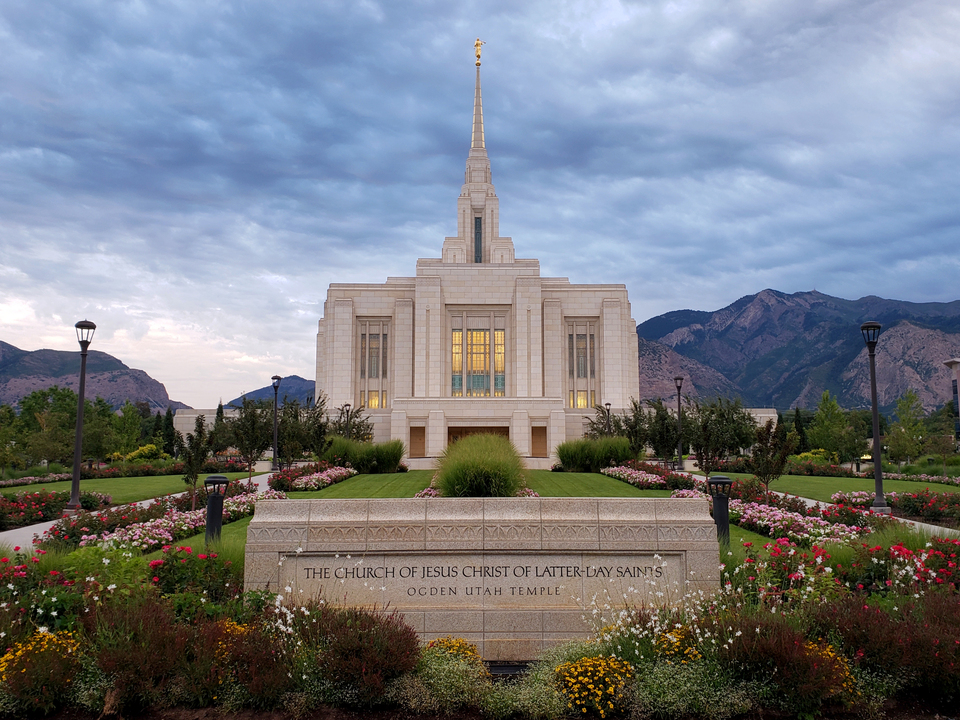 Granite, quarried and fabricated in China

The Ogden Utah Temple serves as a religious centerpiece to downtown Ogden where it occupies an entire city block on Washington Boulevard (US Highway 89). The historic Ogden Tabernacle, completed in 1956, shares the temple block and holds the distinction of being the last tabernacle built by the Church. The temple grounds are beautified by large water features, mature trees, and colorful landscaping.

The Ogden Utah Temple was the fifth temple built in Utah and the second built along the Wasatch Front.

The Ogden Utah Temple was the first temple dedicated in the state of Utah, as the four previous temples were dedicated in Utah Territory over 78 years earlier.

The Ogden Utah Temple is one of only four temples with six instruction rooms. (The other three temples are the Provo Utah Temple, the Jordan River Utah Temple, and the Washington D.C. Temple.)

The Ogden Utah Temple was originally named the Ogden Temple.

The announcement of the Ogden Utah Temple and Provo Utah Temple was prompted by a statistic computed in the mid-1960s that 52 percent of all ordinance work was performed in three temples: the Logan Utah Temple, the Manti Utah Temple, and the Salt Lake Temple.

The original design for the Ogden Utah Temple included a gold-leafed statue of the angel Moroni atop a gold-colored spire. The statue was eventually eliminated from the design, though one was added over 30 years after its dedication.

Ground was broken for the Ogden Utah Temple on the 96th birthday of President David O. McKay. He passed away just 4 months later. The temple was subsequently dedicated on the second anniversary of his passing.

At the dedication of the Ogden Utah Temple, President Harold B. Lee finished the remaining one-third of the dedicatory prayer when President Joseph Fielding Smith became too weak from standing so long.

The efficient design of the Ogden Utah Temple ushered in an era of accelerated endowment work. During its first full month of service, the temple outperformed the four other operating temples in Utah combined.

On November 18, 2002, an angel Moroni statue was added to the Ogden Utah Temple, 30 years after its dedication, as part of an exterior renovation project. The spire—originally colored gold—was painted a brilliant white to lend distinction to the statue. The landscaping was completely redone including replacement of the floodlighting, upgrade of the water features, and modification of the parking.

On February 17, 2010, the Church held a news conference to announce that the Ogden Utah Temple would undergo a complete renovation, transforming the existing structure into a beautiful new east-facing, stone-clad temple with art glass windows. Elder William R. Walker, executive director of the Temple Department, said: "We hope these improvements will not only better serve Church members but also add to the beauty of downtown Ogden for all to enjoy." The announcement came just 3½ months after the passing of Church architect, Emil B. Fetzer, who designed the original building.

The Daughters of Utah Pioneers Museum, originally built as the Weber Stake Relief Society Hall in 1902, was transported from the Ogden Utah Temple grounds on January 24, 2012, to a new permanent location on a half-acre, city-donated site at the corner of Lincoln Avenue and 21st Street—one block west of the temple, which was undergoing renovation. The Miles Goodyear Cabin was also relocated with the museum.

The Ogden Utah Temple was rededicated in 2014 after a three-and-a-half-year renovation project that architecturally transformed its exterior appearance. While much of the interior layout remained the same, some rooms were reconfigured, and all of the auxiliary systems and interior design were replaced. The adjacent tabernacle was also refurbished and altered including the removal of its spire, lending more prominence to the temple. All landscaping was redone, featuring two beautiful water features on the east and west sides of the temple. The above-ground parking structure was replaced with surface and underground parking.

"And I, Nephi, did build a temple; and I did construct it after the manner of the temple of Solomon…and the workmanship thereof was exceedingly fine."
—2 Nephi 5:16