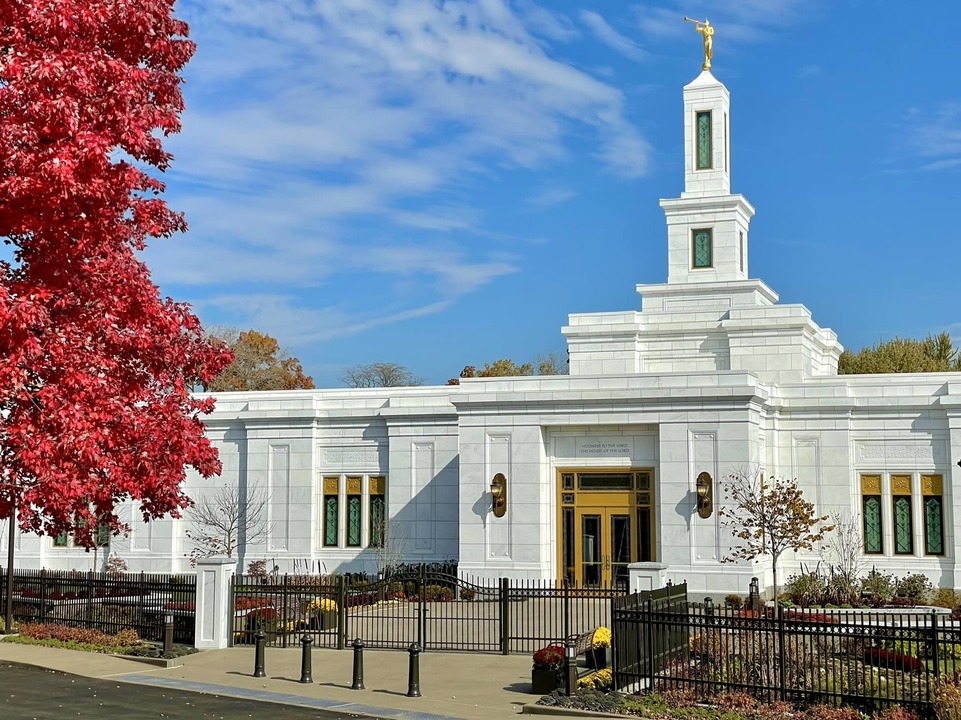 An open house has been announced for the newly renovated Columbus Ohio Temple, beginning with a media day on Monday, April 24, followed by tours for invited guests from April 25–28, 2023. Public tours will be held from Saturday, April 29 through Saturday, May 13, 2023 with no tours held on Sundays. President M. Russell Ballard of the Quorum of the Twelve of the Apostles will preside at the rededication on Sunday, June 4, 2023. Dedicatory sessions will be broadcast to all units in the temple district at 9:00 a.m., 12:00 noon, and 3:00 p.m.1

On August 15, 2020, the Columbus Ohio Temple closed for extensive renovation. During the closure, patrons in the temple district are encouraged to attend the Indianapolis Indiana Temple and Detroit Michigan Temple.

The Columbus Ohio Temple is located 150 miles south of Kirtland, Ohio, where the restored Church of Jesus Christ dedicated its first temple in 1836. The temple stands in a wooded area of western Columbus adjacent to a meetinghouse in the Columbus Ohio Stake. The beautiful white Vermont marble facing on the exterior was quarried near Sharon, Vermont, the birthplace of the Prophet Joseph Smith.

The Columbus Ohio Temple was second temple built in Ohio, following the Kirtland Temple (1836), which is no longer owned or operated by The Church of Jesus Christ of Latter-day Saints.

Ownership of the temple site has ties to Julia Clapp Murdock, a devoted member who lived in Kirtland at the time of Joseph Smith. On April 30, 1831, Julia passed away after giving birth to twins on the same day that Emma gave birth to twins who died shortly after birth. Julia's husband asked the Prophet and Emma to care for the twins, feeling he was unable. The gesture helped softened Emma's sorrow. Julia's father, Orris, was a member of Sidney Rigdon's congregation, who eventually became embittered toward the Church and left New York for Ohio accompanied by his brother, Abner Clapp. Upon their arrival, Abner purchased the land where the temple now stands. Records indicate he was the land's first owner, and as far as can be ascertained, he did not share his brother's animosity toward the Church.2

Shortly after construction began on the Columbus Ohio Temple, the floor plan was altered to include an additional room where patrons who had traveled long distances could eat and change clothes before presenting themselves at the recommend desk. This feature was included in the design of subsequent temples, starting with the Spokane Washington Temple.

The Columbus Ohio Temple closed on August 15, 2020, for an extensive renovation that altered the experience appearance of the temple changed a few aspects of the interior layout.

On December 9, 2021, the angel Moroni was reinstalled on the steeple of the Columbus Ohio Temple during renovation. The statue, which had originally faced east, was rotated to face southwest over the temple entrance.