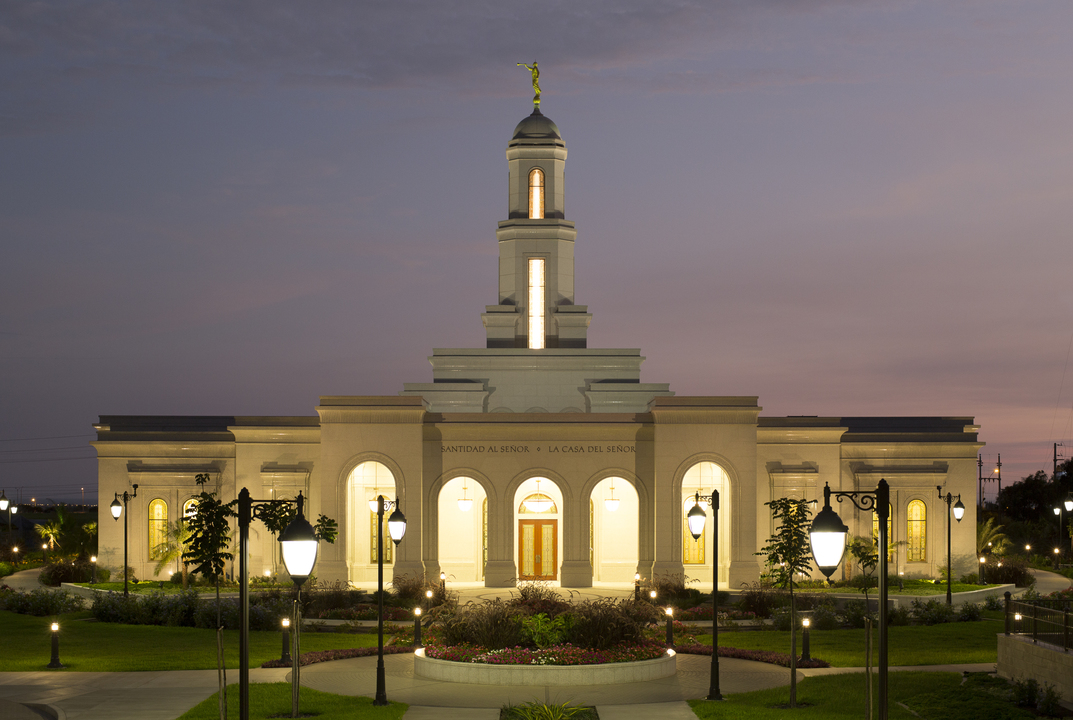 The Trujillo Peru Temple is located on a large parcel of ground adjacent to the beautiful Campo Eterno cemetery on the highway to Huanchaco, just east of the famous ruins of Chan Chan—the largest Pre-Columbian city in South America (20 square miles), designated a World Heritage Site in 1986. An accommodation center shares the temple site, providing a place for traveling patrons and workers to freshen up before entering the temple and to stay overnight. Land has also been set aside for a future meetinghouse.

The Trujillo Peru Temple was the second temple built in the country of Peru, following the Lima Peru Temple (1986).

The Trujillo Peru Temple was originally to be constructed on the site of the stake center for the Trujillo Peru Primavera Stake. The building was to be razed and replaced with the temple. The location later changed following the acquisition of the Campo Eterno site.

The Trujillo Peru Temple was announced in a news release from the First Presidency dated December 13, 2008. It stated, "We are confident that this will be a blessing to the many faithful Saints in this and surrounding areas who have had to travel long distances to enjoy the blessings of the temple. We commend the Saints for their devotion and faithfulness, and are thankful for the blessings that will come to them through the construction of this new temple." The temple would serve more than 88,000 members in the region.1

Peru's only operating temple, which was serving 116 stakes and districts, was dedicated in Lima by President Gordon B. Hinckley in January 1986. Members in Trujillo traveled 9 to 10 hours by bus to attend the temple, which was exceptionally busy on Saturdays. Buses arrived from all over the country full of patrons, who contentedly waited outside the temple—sometimes for hours—for their turn to get inside to participate in sacred ordinance work.2

On September 14, 2011, Elder Rafael E. Pino, president of the South America Northwest Area, presided over the groundbreaking ceremony for the Trujillo Peru Temple. He was accompanied by his wife and his two counselors, Elder Juan A. Uceda and Elder W. Christopher Waddell, and their wives. Elder Pino said, "The beginning of this construction project can represent a time for us to construct our lives based on the teaching of the Lord, Jesus Christ,"3

A public open house was held for the Trujillo Peru Temple from Friday, May 8, through Saturday, May 30, 2015. Visitors had the opportunity to learn about the importance of temples to members of the Church and to tour the beautiful interior rooms of the building.

On Saturday, June 20, 2015, the Coliseo Gran Chima sports arena filled with hundreds of youth on the eve of the dedication of the Trujillo Peru Temple for a cultural celebration that honored the Incan history and culture of Peru in a colorful event that pleased the eyes and ears with traditional folk dances and music. "I bring you the greetings and love of President Thomas S. Monson, our dear prophet," said President Dieter F. Uchtdorf. "He would love to be with you tonight—and when I return I will tell him what a wonderful experience I had with you."4

President Dieter F. Uchtdorf, second counselor in the First Presidency, presided over the dedication of the Trujillo Peru Temple on Sunday, June 21, 2015. He prayed, "Wilt Thou bless the leaders and the people of this nation for their friendliness to Thy church. We pray for all in this land who have an opportunity to hear and ponder the message of the restored gospel of Jesus Christ. Please touch their hearts and lives with Thy goodness. Hasten the miracle of conversion among these great and good people."5

"Each holy temple stands as a symbol of our membership in the Church, as a sign of our faith in life after death, and as a sacred step toward eternal glory for us and our families."
—Russell M. Nelson