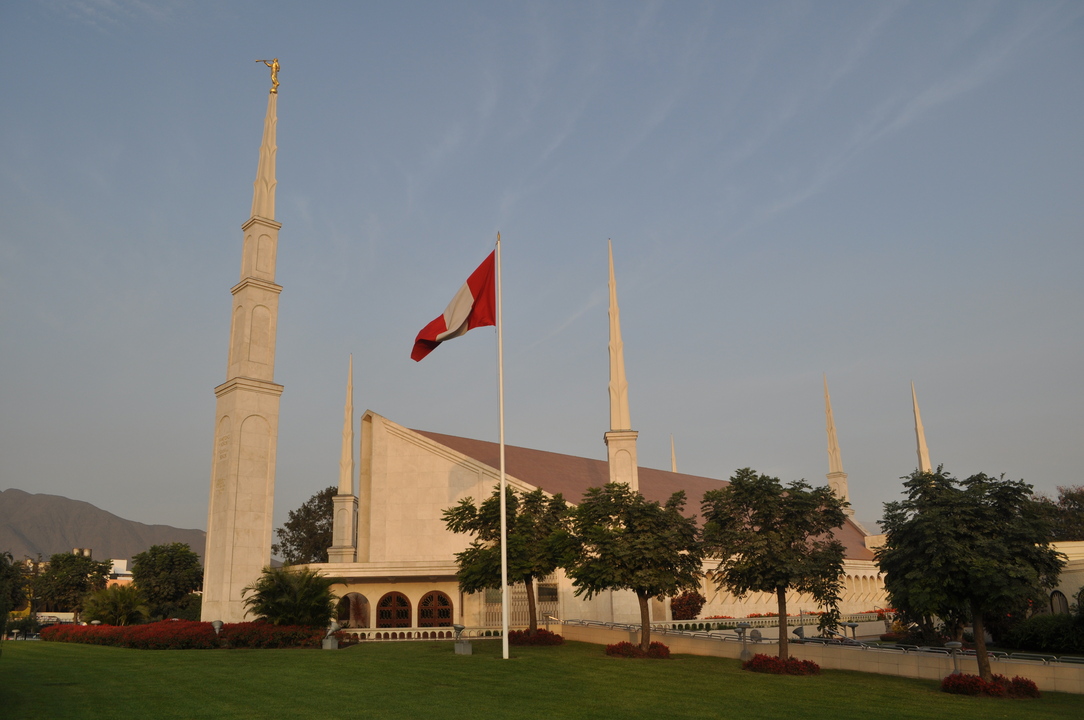 Situated in eastern Lima in the upscale district of La Molina, the Lima Peru Temple, accentuated by six statuesque spires, rises resolutely above heavily traveled Avenida Javier Prado. The spacious grounds of the temple are thoughtfully landscaped to create a peaceful haven for waiting patrons or anyone seeking refuge from the worries of the world. An accommodation center shares the grounds, offering living quarters, a cafeteria, and a family history center. The Peru Missionary Training Center is also located in La Molina, just a short drive from the temple.

The Lima Peru Temple was the third temple built in South America, following the São Paulo Brazil Temple (1978) and the Santiago Chile Temple (1983), and the first built in Peru.

Lima, Peru, has the largest number of stakes of any city in South America.

Over 24,500 visitors toured the Lima Peru Temple during its open house period, which was extended three days due to the high level of public interest.

After touring the Lima Peru Temple, the wife of the mayor of La Molina commented, "If heaven really exists, today I have visited a little piece of that heaven."

The Lima Peru Temple was dedicated just one week before its South American sister building, the Buenos Aires Argentina Temple, which has since been remodeled to include two additional wings.

The Lima Peru Temple was dedicated by President Gordon B. Hinckley, under the direction of President Ezra Taft Benson, over three days in eleven dedicatory sessions.

The dedicatory prayer of the Lima Peru Temple makes several references to the Book of Mormon prophet Lehi, including the memorable passage: "Surely father Lehi has wept with sorrow over his posterity. Surely he weeps today with gladness, for in this holy house there will be exercised the fullness of the priesthood to the blessing, not only of those of this and future generations, but also to the blessing of those of previous generations."

Two years after the dedication of the Lima Peru Temple, the 11 stakes in the city were reorganized over the weekend of January 30–31, 1988, to create 7 new stakes, for a total of 18. Elder M. Russell Ballard presided over the reorganization, which took place in six conferences attended by more than ten thousand members of the Church.

From 1988 to 1990, attendance at the Lima Peru Temple tripled, marked by an increase in weekday sessions from three a day to eleven a day.

Saturdays, holidays, and special occasions are the most heavily attended days at the Lima Peru Temple where as many as 35 sessions have been conducted in a day.

During a renovation in 2013, a new north-facing angel Moroni was installed atop the main spire of the Lima Peru Temple, which also faces north. Although the previous angel had faced east, the new angel was allowed to remain as fitted by the contractor after being reviewed by a visiting apostle.

"A temple is a place in which those whom He has chosen are endowed with power from on high—a power which enables us to use our gifts and capabilities—to bring to pass our Heavenly Father's purposes in our own lives and the lives of those we love."
—David B. Haight