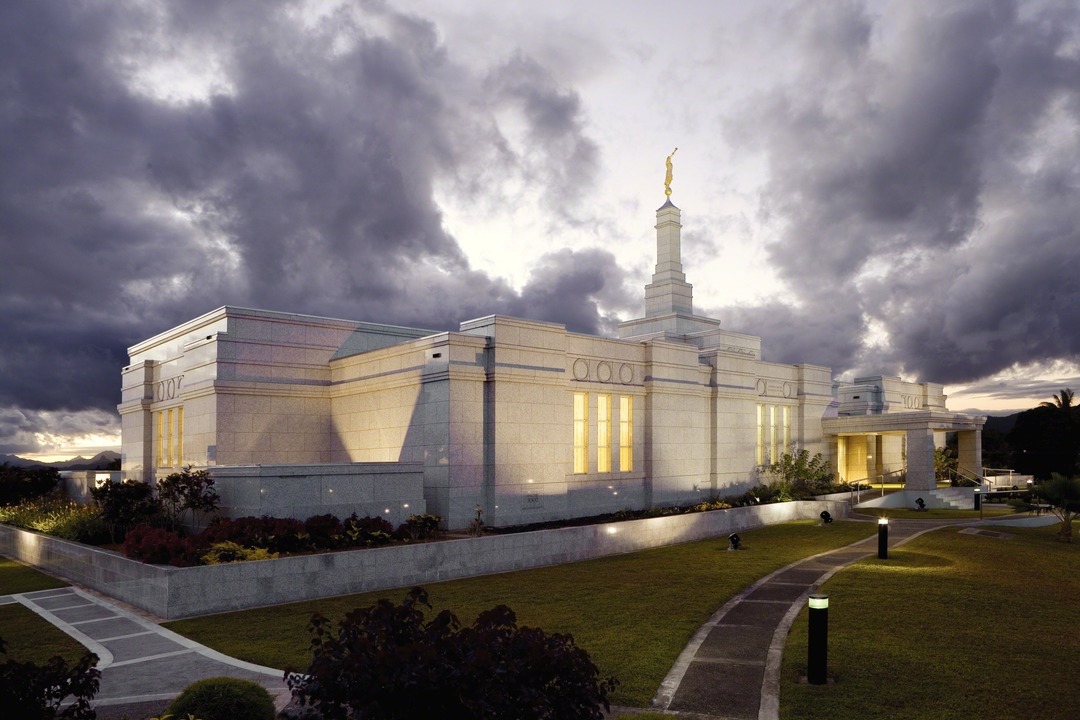 The Suva Fiji Temple is located just minutes from the nearby Samabula Chapel in a scenic location not far from the downtown area of Suva, Fiji's capital. The temple site sits on one of the highest points in the city with views of the Pacific Ocean from three sides.

The Suva Fiji Temple was the first temple built in Melanesia.

Before the Suva Fiji Temple was constructed, the 12,000 members in the four stakes on the main island of Viti Levu and in two districts located on the nearby islands of Vanua Levu, Vanuatu, New Caledonia, Kiribati, Nauru and Tuvalu, traveled to temples in Tonga, Samoa or New Zealand.

Elder Earl M. Monson of the Seventy presidency presided at the groundbreaking for the Suva Fiji Temple. "It will be a privilege for many of you to watch as the temple grows from where we are today to a beautiful structure on this scenic hillside," he said. Referring to the great era of temple building initiated by President Gordon B. Hinckley, Elder Monson said: "In many ways we are preparing for the Second Coming of the Savior to the earth, but equally important is that we are preparing family members to meet Him. It is wonderful to know the steps to be taken on the strait and narrow path, defined by the Savior, that lead to eternal life, and to know how families and the temple are interlocked with them."1

During the open house that preceded the rededication of the Suva Fiji Temple, approximately 22,000 people toured the interior of the building including dignitaries and members of the public.

The Suva Fiji Temple was rededicated by President Henry B. Eyring in three sessions held on Sunday, February 21, 2016. The youth cultural celebration held the evening prior at Vodafone Arena was cut short due to the pending arrival of Tropical Cyclone Winston, which struck that night with winds up to 175 miles per hour, claiming at least five lives, knocking out power, and destroying entire villages along the north coast. The city of Suva was largely spared by the storm, which had shifted direction hours before landfall. The temple rededication was rebroadcast on Sunday, February 28, 2016, to members who were unable to attend due to the storm.

The colors and design motifs of the temple were inspired by the flowers, beaches and jungles of Fiji. The interior of the temple features original art glass and a hand-painted mural painted by Linda Curley-Christensen of Wallsburg, Utah, depicting the landscape and flora of the islands.

Renovation of the temple included replacement of the roof, mechanical systems and interior walls in order to keep out moisture. The original exterior stone, which is white granite from Italy, remains mainly intact.

The baptismal font features Navonna Travertine stone surrounded with a carved woven accent band. The interior of the font features small glass tiles installed in graduated blue tones to mimic the ocean color and depth. The glass and brass railing surrounding the font was manufactured and installed by Ductworks of Logan, Utah.

The art glass was created by Tom Holdman Studios of Lehi, Utah. The design features woven banana leaves, hibiscus flowers and palms, while the light green color reflects the lush jungles of Fiji. Tom Holdman developed an innovative "molded glass" technique to achieve a unique texture and the desired opacity while allowing natural light to pass through.

The landscaping was designed by LDS Church Physical Facilities to match existing subtropical vegetation on the property.