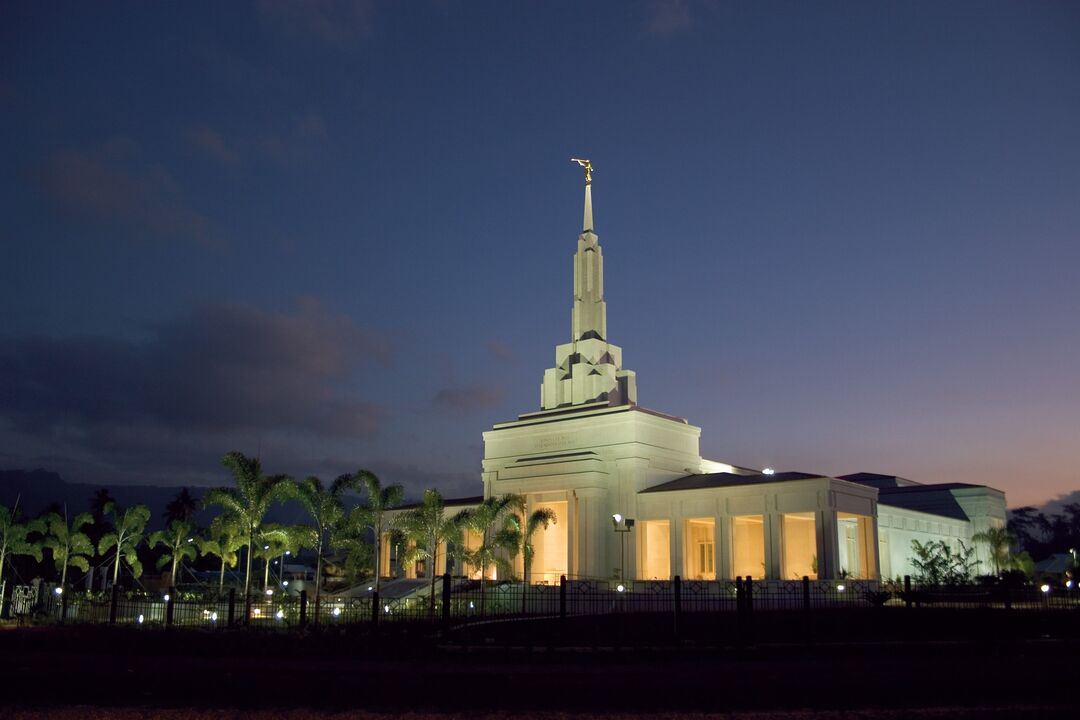 Adjacent to the sprawling campus of the Church College of Western Samoa (a combined elementary, middle, and high school), the Apia Samoa Temple stands on the western outskirts of Apia in Pesega. Numerous other Church buildings occupy Pesega including mission headquarters, Church administrative buildings, and a meetinghouse. The breathtaking grounds—open to the public—feature a wide variety of healthy foliage and a striking water feature at the entrance to the building.

The Apia Samoa Temple was the first temple built in Samoa and the third built in Polynesia, following the Laie Hawaii Temple (1919) and the Hamilton New Zealand Temple (1958).

The Apia Samoa Temple was the second temple to be completely destroyed and rebuilt. (The other is the Nauvoo Temple.)

The Apia Samoa Temple was the first reconstructed temple to be relocated from its original footprint. The adjoining meetinghouse that had been located near the intersection was removed, and the temple was built in its place.

The Samoa Temple—as it was originally called—was to be constructed in Pago Pago, American Samoa as a regional temple to serve the saints of Samoa, Tonga, French Polynesia (Tahiti), and Fiji.

On April 2, 1980, President Spencer W. Kimball's landmark announcement of 7 new temples suddenly tripled the number of temples planned for Polynesia. The Samoa Temple would be relocated from Pago Pago, American Samoa to Apia, Samoa, where most members lived. And additional temples would be built in Nuku'alofa, Tonga and Papeete, Tahiti.

State dignitaries participated in the open house of the Apia Samoa Temple including Malietoa Tanumafili, the head of state in Western Samoa, who performed the ribbon-cutting ceremony preceding the open house and—though not a member of the Church—cited LDS scriptures and his own views on the importance of the temple in Samoa. Senator Pomare Galeai of the Congress of American Samoa also spoke at the open house, representing Governor Peter Tali Colman.

The Apia Samoa Temple was dedicated four days before the Nuku'alofa Tonga Temple, marking the first time that two dedications were held in the same month.

Under the direction of President Spencer W. Kimball, President Gordon B. Hinckley, second counselor in the First Presidency, dedicated the Apia Samoa Temple in seven sessions—three on Friday, August 5; three on Saturday, August 6, and one on Sunday, August 7, 1983.

On the evening of July 9, 2003—nearly 20 years after its dedication—the Apia Samoa Temple was destroyed by fire while closed for an extensive remodeling project. One week later, President Gordon B. Hinckley announced that the temple would be rebuilt.

On January 25, 2005, the same angel Moroni statue that had survived the fire that engulfed the original building was placed atop the newly rebuilt Apia Samoa Temple.

The Apia Samoa Temple was rededicated on September 4, 2005. The granite building reflects the design of the original while providing over 4,000 additional square feet, higher quality building materials, and a more efficient floor plan.

Tragedy struck the Apia Samoa Temple on a Wednesday evening, July 9, 2003, when fire engulfed the temple in a 45-minute blaze that granted the arriving 3 fire trucks and 100 volunteers too little time to save the building—though flames that threatened adjoining Church buildings were successfully extinguished. The next morning, overwhelmed citizens found courage in the sight of the angel Moroni standing dignified atop the remaining steel-and-concrete skeleton. The temple had been closed for an expansion and renovation project—the likely origin of the fire—and was scheduled for rededication later that year. No one was injured in the fire, and no records were destroyed, having been removed prior to renovation activity.1

A week after receiving the devastating news of the fire, President Gordon B. Hinckley sent a letter to the Area Presidency, dated July 16, 2003, announcing the temple would be rebuilt. A grateful congregation gathered on the hallowed site just months later to join in the groundbreaking services, held Sunday, October 19, 2003. Elder Dennis E. Simmons of the Seventy presided at the ceremony. He expressed the deep feelings of emptiness felt by the Samoan saints who also rejoiced in the temple's reconstruction. To create a larger site for the temple and to afford a better view for passers-by, a dated meetinghouse that shared the site was razed, and a replacement chapel was built across the street.2

When the time came to lay the first block for the reconstructed temple, Brother Joseph Stehlin, 84, was called upon to repeat a ceremonial right he had received in January 1982. At that time, he was a block mason and serving as bishop of the Apia Samoa Pesega 4th Ward. He was chosen and "felt honored to have the opportunity to lay the first block." He repeated the honor on May 5, 2004. Sister Merry Jones was present at the ceremony and held a copy of the book Samoa Apia Mission History – 1888-1983. She tapped Brother Stehlin on the arm, and a showed him a picture from the book that captured his block-laying ceremony in 1982. "This is a very special time," she said.3

On January 25, 2005, the same angel Moroni statue that had survived the fire reclaimed its place atop the spire of the new temple. The statue was retrieved from the remains of the original building on July 24, 2003, and kept in storage until its reinstallment.4

The original 14,560 square-foot building followed the same design used for other temples built in the South Pacific in the 1980s: "R-wall" masonry exterior finish over concrete block and a split cedar shake shingle roof.5