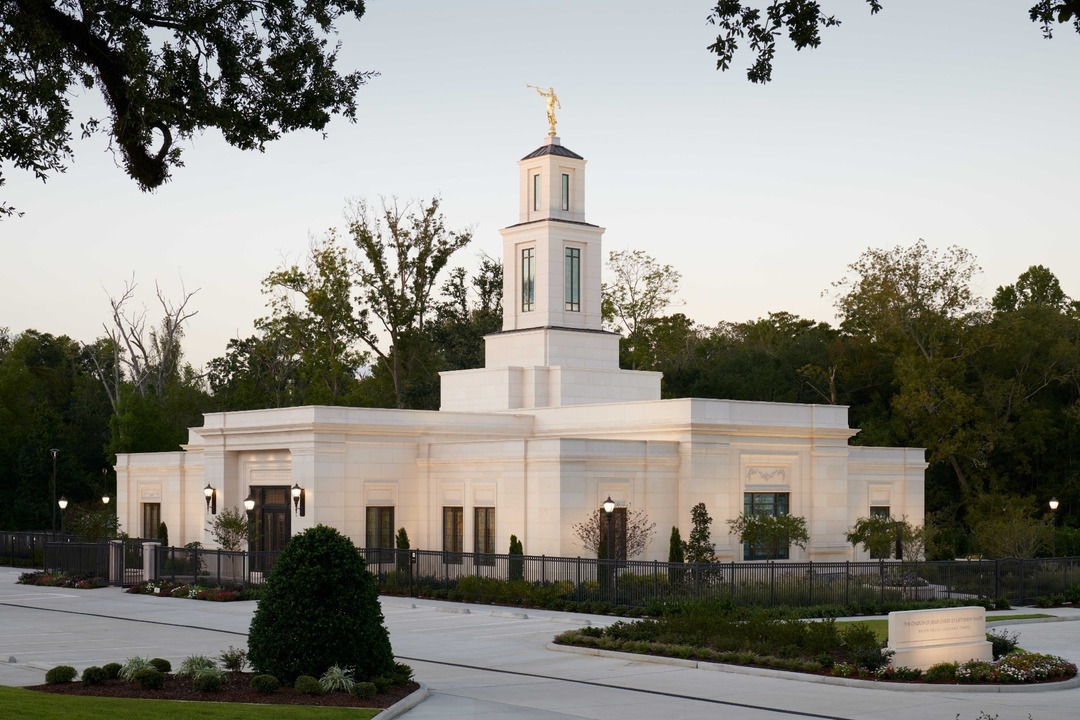 The Baton Rouge Louisiana Temple is tucked behind the stake center for the Baton Rouge Louisiana Stake against the beautiful backdrop of a 103-acre wetlands nature reserve in the South Baton Rouge neighborhood. The French-inspired interior decor of the temple honors the heritage of the region. Charming gardens surround the building including a handsome magnolia tree—a favorite of the South—that serves as the centerpiece for the grounds on the rear side of the temple.

The Baton Rouge Louisiana Temple was the first temple built in Louisiana.

The establishment of the Church in Louisiana began in January 1841 when the Prophet Joseph Smith received a letter from two Louisiana Saints saying a small branch of the Church existed in New Orleans and asking for an elder to be sent. By 1955, the state's first stake had been established in the same city.

Young women in the temple district polished and hung the crystals for the Celestial Room chandelier of the Baton Rouge Louisiana Temple with the help of their mothers. When they discovered it hadn't turned out quite right, they repeated the entire process to correct their error.

Over 18,500 guests attended the weeklong open house for the Baton Rouge Louisiana Temple including government officials, religious and community leaders, media representatives, 125 neighbors, and friends of other faiths who patronized the local family history centers.

The Baton Rouge Louisiana Temple was dedicated in four sessions by President Gordon B. Hinckley. Over 4,600 members attended the sacred services. The temple was frequently referred to as a "house of refuge."

Five years after the dedication of the Baton Rouge Louisiana Temple, the region was devastated by Hurricane Katrina in August 2005, resulting in a death toll of 1,836. Miraculously, all Church members survived, though some lost everything they had. The stake center next to the temple was used as a safe place for displaced victims. In the weeks following the storm, the temple operated with very few workers and patrons. By 2006, so many patrons were arriving, they had to be put on standby.

The Baton Rouge Louisiana Temple closed on January 28, 2018, for an extensive renovation that enclosed the portico, reshaped the steeple, reclad the exterior in limestone, and replaced the windows with beautiful art glass featuring a shell and magnolia flower motif. The interior of the temple was refinished and refurnished with French-inspired accents and murals in the first endowment room. The landscaping was redesigned to better accommodate patron gatherings and to feature more gardens.

Elder Monte J. Brough of the Seventy and president of the North America Southeast Area presided at the groundbreaking ceremony for the Baton Rouge Louisiana Temple. During his remarks, Elder Brough said that the greatest revelation of the latter days was Joseph Smith's first vision. "This experience allowed Joseph to have actual knowledge of the Father and the Son," he said. Elder Brough further explained that all men must come to know the only true God and His Son Jesus Christ. That is the purpose of temples, he affirmed. "It is a process whereby we come to know Jesus Christ because we act as saviors, in a modest sense, to bring to those who have not had a chance across this earth and those who lived prior to our time the opportunity to hear the gospel, to accept the gospel and to be members of Heavenly Father's Church."1

Elder Brough also spoke of the revelation on September 21, 1823, when the Angel Moroni appeared to Joseph Smith and quoted Malachi: "The hearts of the children shall turn to their fathers." Elder Brough indicated that the dramatically increased interest in family history research, rapidly changing technology and dozens of temples currently being constructed across the earth are fulfilment of Malachi's prophecy. "Last year, " he said, "the Family History Department filmed in many different countries, gathering millions of names. At current rates, we have collected enough names to keep the temples busy for a long time," he said. "We really have no excuse."2