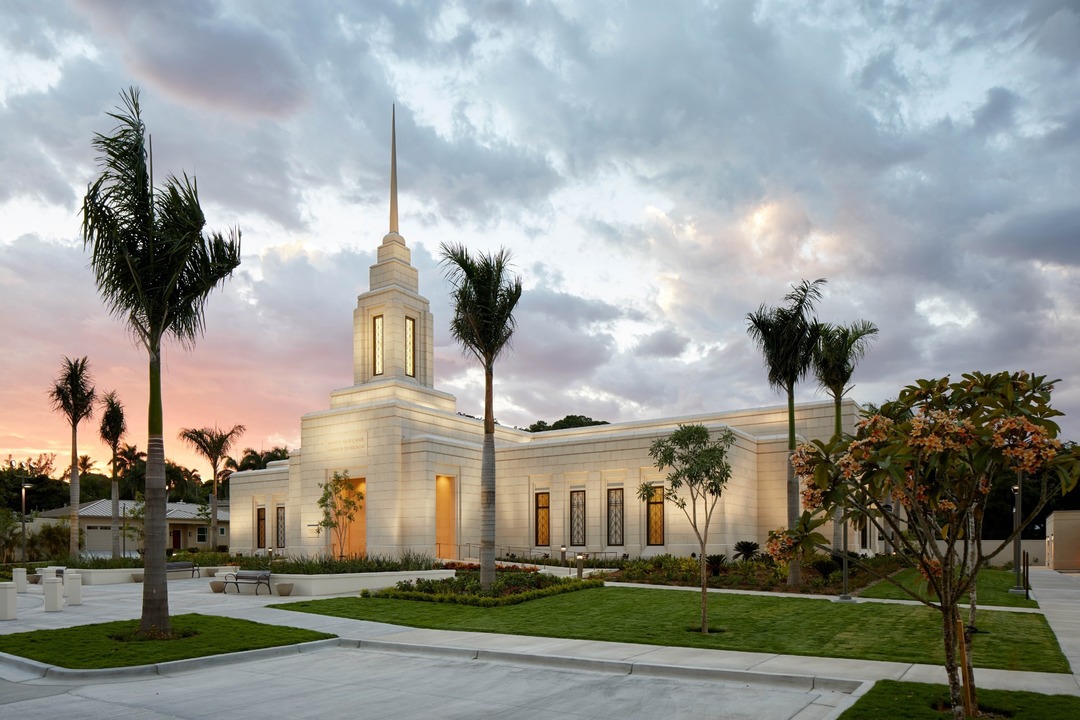 The beautiful Port-au-Prince Haiti Temple stands behind the Route de Frères meetinghouse in the Pétion-Ville suburb east of Port-au-Prince. An arrival center is available on the north end of the meetinghouse with bathrooms, showers, lockers, dining tables, and a waiting room. The temple president's residence is on site along with an ancillary building that houses a distribution center and maintenance equipment.

The Port-au-Prince Haiti Temple was the first temple built in the country of Haiti and the second built in the Caribbean islands, following the Santo Domingo Dominican Republic Temple (2000).

The first Haitian convert inquired about the Church in 1977. In August 1980, the Haitian government gave official recognition to The Church of Jesus Christ of Latter-day Saints, and two months later, the first branch of the Church was established in Port-au-Prince. The Haiti Pout-au-Prince Mission was organized on August 1, 1984.

President Thomas S. Monson announced the construction of the Port-au-Prince Haiti Temple at the Sunday Morning Session of the 185th Annual General Conference on April 5, 2015. Haiti was home to approximately 10 million people including more than 19,000 members of the Church who belonged to the Santo Domingo Dominican Republic Temple district, requiring nearly a day's journey.1

The announcement of the Port-au-Prince Haiti Temple was an enormous lift and blessing to the Saints of Haiti who had endured substantial suffering in the aftermath of the 2010 Haiti earthquake and subsequent outbreak of cholera in one of the poorest countries in the world. The natural disaster destroyed countless vital records, creating an obstacle for members who desired to cross the border into the Dominican Republic but who were unable to present valid birth certificates.

At a stake conference held in Port-au-Prince on Sunday, March 12, 2017, Elder Neil L. Andersen of the Quorum of the Twelve Apostles announced that the Church had acquired the property behind the meetinghouse on Route de Frères for construction of the Port-au-Prince Haiti Temple.

Elder Walter F. González of the Seventy and president of the Caribbean Area presided at the groundbreaking ceremony for the Port-au-Prince Haiti Temple on Saturday, October 28, 2017. He said of the groundbreaking, "I can only think about everlasting joy and gratitude for all that the temple means in our lives. It is hard to express with words. This was a day of joy and gratitude when we start to build a portal to heaven as we come to better understand the importance of the covenants made in the temple and how they impact our daily lives, both in this time and eternity."2

The public open house for the Port-au-Prince Haiti Temple began Thursday, August 8, 2019, and continued through Saturday, August 17, 2019. Prior to the open house, a press conference was held on August 6, 2019. Information about the temple and its significance was communicated to national and international media. The following day, invited civic and community leaders toured the interior of the temple and asked questions.

On the evening prior to the dedication of the Port-au-Prince Haiti Temple, Elder David A. and Sister Susan Bednar met with Haitian youth at a devotional where they answered questions and encouraged the young men and women to prepare to enter the temple and to submit names for temple ordinance work. "Jesus Christ is the Savior of all the people who have lived on earth," said Elder Bednar. "Any young man or woman in this Church can explain how someone who has died can receive the gospel of Jesus Christ and the ordinances of the gospel that are performed in the temple."

Elder David A. Bednar of the Quorum of the Twelve Apostles dedicated the Port-au-Prince Haiti Temple on September 1, 2019, where he prayed for Haiti and its people: "Heavenly Father, we pray that this holy temple will be a beacon of light and truth to the nation of Haiti. Please bless the people of this land with peace, with an appreciation for their legacy of liberty, with stability, and with a curiosity about and an interest in the restored gospel of Thy Beloved Son. May the lives of these good men, women, and children always be under Thine infinite protection."3

The decor colors used in the Port-au-Prince Haiti Temple includes blue, green and gold, with a stylized palm-leaf pattern throughout. Palm leaves are used as a symbol of Jesus Christ’s triumphal entry into Jerusalem.

The carpet pattern represents the island’s lush vegetation, with vivid turquoise blue and lime green representing the ocean. The carpet includes designs of the hibiscus, Haiti’s national flower, and an array of vegetation, palm leaves and tropical flowers.

As lighting is a vital element of all temples, Swarovski crystal from Austria was used in the sealing and celestial rooms. Italamp fixtures and Venetian hand-blown glass from Italy were used in the bride’s room, and brass with white acrylic fittings was used throughout the temple.