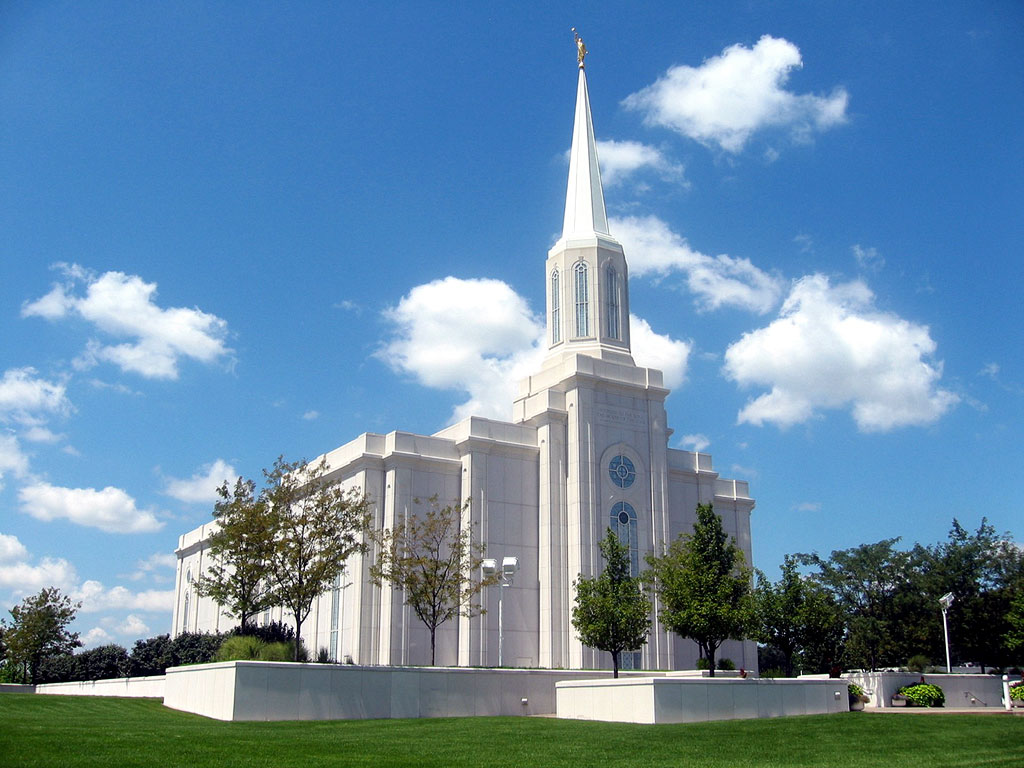 The St. Louis Missouri Temple is a prominent landmark on the North Outer Forty—just west of its junction with I-270—in the charming St. Louis suburb of Town and Country. Dozens of trees and shrubs grace the grounds of the temple, creating a stunning tree-lined approach to the entrance, anchored by a tranquil circular water feature. The public is welcome to walk the grounds of the temple to admire the beautifully landscaped gardens and to feel the peace that abides about this holy structure.

The St. Louis Missouri Temple was the first temple built in Missouri, though temple sites were dedicated in the 1830s in Independence, Far West, and Adam-ondi-Ahman.

The site for the St. Louis Missouri Temple was approved by each member of the First Presidency. Each was individually escorted to six possible sites, and each in turn selected the same site to build the temple.

Nearly 5,000 people gathered to witness the groundbreaking for the St. Louis Missouri Temple on an exceptionally cold and breezy day. "This may sound strange," said President Gordon B. Hinckley who presided over the services, "but I am rather glad it is cold. I think it brings us to a greater appreciation for the Saints who left the state of Missouri in 1838 under the orders of the then governor; a tragic episode in the history of our people, and I think that it must be so for Missouri."

Construction of the St. Louis Missouri Temple was well received by residents and enthusiastically welcomed by the mayor, aldermen, and alderwoman of Town and Country and other local officials. Their warm reception reflected the refuge found in St. Louis in the 1830s when Saints fled from persecution in Western Missouri and Illinois.

Extensive news coverage was given to the St. Louis Missouri Temple open house including a front-page story in the St. Louis Post-Dispatch and a full-page article in USA Today with graphics representing the interior floor plan.

U.S. Senator Christopher Bond was among the participants in VIP tours preceding the public open house. While serving as governor of Missouri in 1976, it was he who rescinded the infamous extermination order issued in 1838 by Governor Lilburn W. Boggs commanding Latter-day Saints to leave the state within 30 days under threat of extermination.

During the four-week public open house of the St. Louis Missouri Temple, nearly 260,000 visitors toured the building with 11,518 on the first day alone. Demand for the free tickets was so high that tours were conducted on two of the four Sundays, though it was originally planned that no tours would be held on Sundays. Reaction was overwhelmingly positive with visitors demonstrating genuine interest and curiosity.

The St. Louis Missouri Temple was dedicated in 19 sessions over a five-day period. President Gordon B. Hinckley presided over the first two days, then President James E. Faust over the next day and a half, and President Thomas S. Monson over the final day and a half.